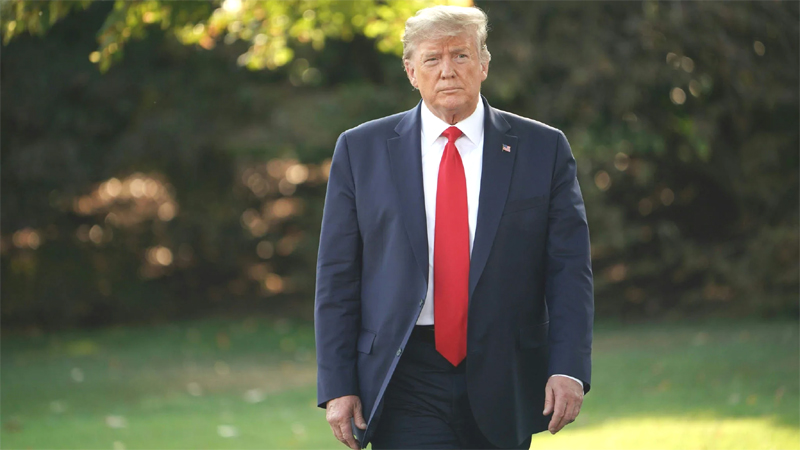 Washington, March 30: Some one lakh people in the US may die from the coronavirus pandemic and the peak death rate was likely to hit the country in two weeks, President Donald Trump has warned, citing his health experts as he extended the “social distancing” guidelines until April 30.
His statement came as the death toll in New York state, America’s epicentre of COVID-19, crossed the 1,000 mark, with Governor Andrew Cuomo warning that thousands of people may die before the crisis ends.
The total number of confirmed coronavirus cases in the US stood at 143,025 and 2,509 people have died in the country, according to data from Johns Hopkins University.
Assuring his countrymen that he expects the US to be on its way to recovery by June 1, Trump told reporters at a televised White House news conference that he had to extend the social distancing measures till April 30, based on the advice from his two top public health advisors and members of the White House Task Force on Coronavirus: Dr Deborah Bix and Dr Anthony Fauci.
“They demonstrate that the mitigation measures we are putting in place may significantly reduce the number of new infections and ultimately the number of fatalities.
“I want the American people to know that your selfless inspiring and valiant efforts are saving countless lives. You are making a difference. The modeling estimates that the peak and death rate is likely to hit in two weeks,” Trump said during his second Rose Garden press conference on the coronavirus outbreak.
Trump predicted his decision would save hundreds of thousands of lives, in an apparent moving of the political goalposts to account for the fast worsening US pandemic.
“2.2 million people would have died if we didn’t do what we are doing,” the President said.
“If we can hold that number down … to 100,000, it’s a horrible number, maybe even less … we all, all together have done a very good job,” Trump said.
The new April 30 date marks yet another reversal of position on the pandemic by the President, who last week made it clear he did not pick the Easter date, April 12, based on data but because it was a “beautiful timeline.”
Shrugging off his row back, Trump claimed Sunday that Easter (on April 12) had only been an “aspirational date.”
“We can expect that by June 1 we will be well on our way to recovery,” he said.
The coronavirus pandemic is expanding fast in New York’s neighbouring New Jersey, where so far more than 13,000 cases have been reported, with 161 deaths.
More than 20 of the 50 American states have recorded over 1,000 coronavirus cases — the number from where the deadly disease starts skyrocketing.
Major disaster declaration has been notified in nearly two dozen states, in addition to Trump declaring a national emergency a week ago.
The state governments and local city officials have started taking tough measures against those found in the public or not abiding by social distancing measures. For example, in Silicon Valley and New York, the local police have started imposing hefty fine ranging from USD 200 to USD 400 for those not adhering to social distancing measures in public places.
In New York city, Trump told reporters as to how freezer trucks are being brought to a city hospital Elmuhrst in Queens where he grew for the deceased due to fatalities. The city is now running out of morgues.
The modelling put together by Dr Birx and Dr Fauci estimates that the peak and death rate is likely to hit in two weeks, he said.
“All of the flu models predicted anywhere between 1.6 and 2.2 million fatalities if we didn’t mitigate. Some of them predicted half of the United States would get infected and have that level of mortality,” Dr Brix said.
Based on this and the figures coming from the ground, Dr Brix said the White House Coronavirus Task Force has worked very hard together to really look at all of the impacts of the different mitigations that have been utilised around the world.
The Task Force, which is headed by Vice President Mike Pence, has used that evidence base to bring that data and evidence to the President to consider for extending, which is not a simple situation when you ask people to stay at home for another 30 days, she explained.
“There are people who have to go out to work and we know the compromises that they’re making. But, it’s all to protect not only Americans, but the healthcare providers, the healthcare providers that are on the front lines,” she added.
In the absence of such a step, Trump said, various models have predicted around 2.2 million deaths in the US.
With the mitigation like the one announced on Sunday, Dr Brix said the model predicts anywhere between 80,000 and 160,000 maybe even potentially 200,000 people succumbing to this.
“That’s with mitigation. In that model they make full assumption that we continue doing exactly what we’re doing but even better in every metro area with a level of intensity because we’re hoping that the models are not completely right.
That we can do better than what the predictions are,” she said.
“The reason the President made the announcement today about going to the end of April is because we want to make sure that we don’t prematurely think we are doing so great. We may be but we want to push it to the extreme. So take that with you and maybe you will be less anxious,” Dr Fauci said. (PTI)