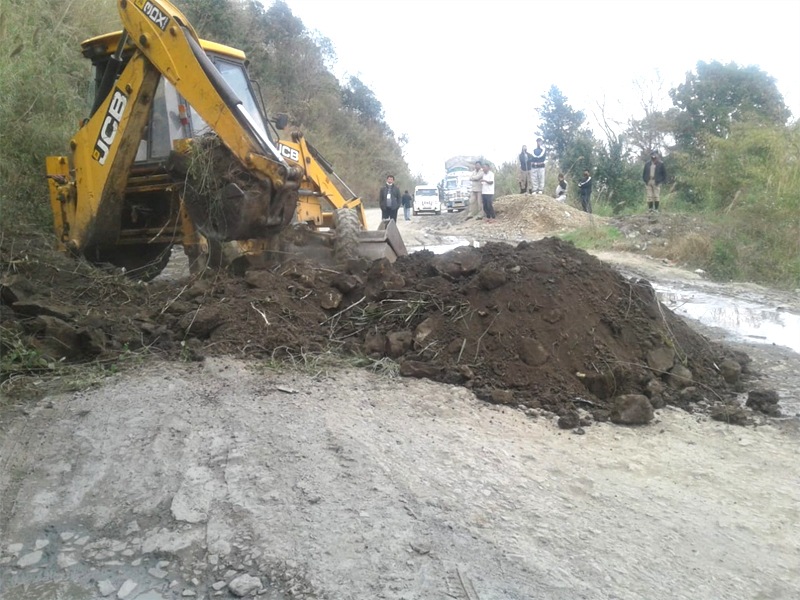 Kohima, March 25: In protest against inattention at Manipur-Nagaland inter-state border by state authorities at the time of the COVID-19 pandemic, the Southern Angami Youth Organisation (SAYO) has imposed blockade on National Highway-29.
The blockade was imposed on the national highway – a lifeline of Manipur State after Southern Angami Public Organisation (SAPO) and Southern Angami Youth Organisation (SAYO) found out that there was no proper monitoring mechanism placed at the inter-state check gate at Khuzama, some 20 km from here to scan travellers.
A makeshift tent put up at Khuzama village to monitor and detect movement of people by the district task force is almost non-functional. People of the area are apprehensive after a woman was detected with the COVID-19 in Manipur and they want Government to strengthen the inter-state borders.
The two organisations wil be meeting Kohima Deputy Commissioner to apprise about the lackadaisical attitude of authorities and health department in manning the inter-state borders. Nagaland has two main inter-state routes with Manipur – Khuzama and Jessami village.
SAYO source said despite several request the Government failed to provide medical team, equipments and facilities at Khuzama police check gate for scanning travellers. NH-29 has been blocked till Government provide necessary facilities and arrangements for prevention of COVID-29, they said.
Manipur is also not only under lockdown but 144 CrPc has been imposed and movement of people restricted to a great extend. (Page News Service)