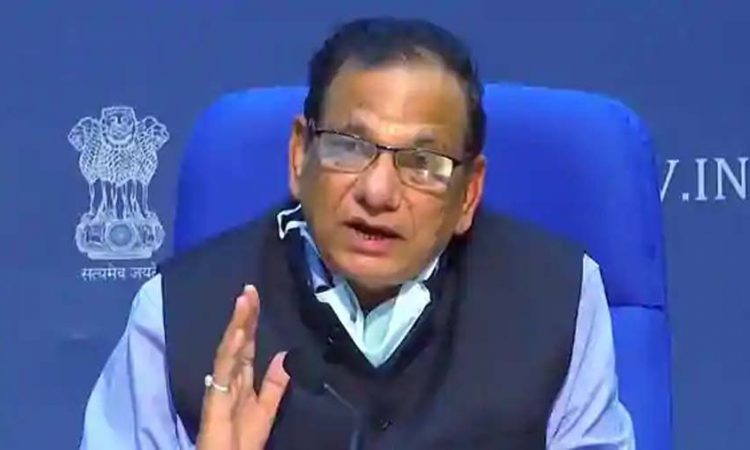 New Delhi, January 19: Of the total people vaccinated against COVID-19 so far, the government on Tuesday said 0.18% were adverse events following immunisation, while 0.002% had to be hospitalised which is fairly low.

Urging healthcare workers not to hesitate to get the COVID-19 vaccine, the Centre said it was their societal responsibility to get inoculated.
Addressing a press conference, NITI Aayog member (Health) V K Paul said concerns about adverse effects and serious problems post immunisation, as of now, seem to be unfounded, negligible and insignificant, and stressed that both the vaccines — Covishield and Covaxin — are safe.
It is saddening that healthcare workers, especially doctors and nurses, are declining to take it, Paul said.
“We are not fulfilling our societal responsibility if a vaccine assigned to us is not being taken. The whole world is clamouring for a vaccine. I request you to please accept the jab,” he said.
Union Health Secretary Rajesh Bhushan said, “As per the data available so far, only 0.18% is the Adverse Event Following Immunization (AEFI) and 0.002 is the percentage of the people who were hospitalised following immunisation. These are fairly low, in fact, lowest so far as we know in the world in the first three days.”
He said India recorded the highest number of first-day vaccinations for COVID-19 immunisation.
Bhushan said in India 2,07,229 people were vaccinated on the first day, while in the US 79,458 people were vaccinated, in the UK 19,700 and 73 were vaccinated in France on the first day.
“The important point here is that if we look at the first week figures then the US conducted vaccinations of 5,56,208 people so that number will already cross by day 3. In the UK, in the first seven days 1,37,897 were vaccinated, 516 people were vaccinated in France in the first week and in Russia 52,000 people were vaccinated in the first week. So these are the comparative figures for you and we have just started so we will pick up speed,” he said.
About whether a person is liable for compensation in case of an adverse event, Bhushan said, “The vaccine (Covaxin) which has been given emergency use authorisation under clinical trial mode is accompanied by three documents. One is a factsheet which is read out and explained to beneficiaries, second is a consent form… and the third is an adverse event reporting form where the recipient has to report the adverse event for the first seven days.”
“There it is clearly mentioned that if there is a causal relationship between immunisation and the adverse event whether it is severe or serious the hospitalisation costs would be borne by the authorities. That is the position as it exists now,” he said.
Bhushan further said in case of Covishield vaccine the monitoring is passive.
“It is that after taking the vaccine I sit for half an hour and I am observed. If there is nothing I go home. If I develop a symptom the onus is on me to come to the hospital and report it. Whereas in case of Covaxin it is active follow-up. The doctor rings you up on a daily basis and you are given a form which you fill for seven days,” he said.
On how the vaccines are distributed to states and Union Territories, Bhushan said it is done based on the proportion in which the Centre got the supplies.
“Which vaccine will go to which vaccination session is a decision which has been left entirely to the states. So states have taken a decision,” the Union health secretary said.
Bhushan said nine states, including Rajasthan and Uttar Pradesh, are among the better performing states and union territories with over 70 per cent coverage.
“Better performing states in COVID-19 vaccination coverage include Lakshadeep (89.3 per cent), Sikkim (85.7 per cent), Odisha (82.6 per cent), Telangana (81.1 per cent) , UP (71.4 per cent), Rajasthan (71.3 per cent),” he said.