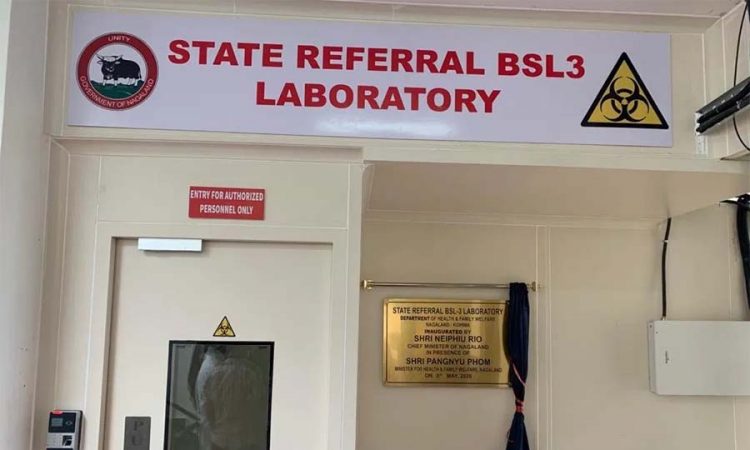 RT-PCR fuss a folly, need to shift to viable alternatives

Kallol Dey
DIMAPUR, AUGUST 8: In the wake of the COVID-19 pandemic, Nagaland has gained one level-3 and two level-2 Bio-Safety Laboratories (BSL), which is quite a considerable boost to the research and healthcare infrastructure of the state, which has forever been in doldrums While two are operational, the other ~ BSL-2 lab at Tuensang ~ is expected to be functional later this month. Much hype and hoopla, social media hysteria and mania, have marked the procurement of the RT-PCR machines and installation of the labs to battle the COVID-19 pandemic. To date, certain mass-based organizations are demanding another lab for Dimapur to battle COVID-19. But medical experts in Nagaland apparently are not thrilled, and do not subscribe to the “injudicious and random” use of the RT-PCR when other viable alternatives are available.
Chaos continues to reign in the marked absence of a holistic response to the COVID pandemic. “Awaiting confirmation by RT-PCR” has been the standard pronouncement of top officials of Health & Family Welfare Department since COVID-19 made its entry into Nagaland. A lot has gone awry while waiting for confirmatory test results from BSL labs. Delays in confirmation of positive samples have been spawning anxiety and unrest, and signs of burnout are starting to show among overworked personnel in the labs. Pathologists and senior Doctors of Nagaland’s medical fraternity, who Nagaland Page managed to interact with, are of the opinion that dependency on the virology laboratories was the outcome of a misplaced strategy of our policymakers, who were further coerced by the high-pitched clamoring by our uninformed and ill-informed public, and political pressure. Going by empirical evidence, as also the explicit guidelines of the ICMR, the TrueNat, which are micro PCRs by themselves, is the more viable alternative.
TrueNat is a chip-based platform which uses a 2-step assay to detect SARS-CoV-2 virus. Step one is an E-gene screening assay. Step two identifies the RdRp gene in the viral RNA, which can confirm the presence of the virus.
The Indian Council of Medical Research (ICMR), under the Ministry of Health & Family Welfare, had issued revised guidelines earlier on May 19 stating that TrueNat testing can be the final word for both screening and confirmation of COVID-19 cases. It also stated that no further RT-PCR based confirmation is necessary for samples that are positive after the confirmatory test (RdRp) on TrueNat.
The ICMR states that if a sample tests negative in the first test (E-gene screening) on TrueNat, it can be considered as “true negative.” A positive sample can be further confirmed by the second TrueNat test (RdRp gene). Two different types of chips or cartridges are used for the screening and confirmatory tests on the TrueNat. As of now, only a few facilities here are conducting confirmatory tests on TrueNat, and are largely depending on labs at Kohima and Dimapur.
Why hotspots like the Dimapur COVID Hospital have not been carrying out confirmatory tests on TrueNat till date despite the ICMR directive of May 9 remains a mystery. The Health & Welfare Department also seems reluctant to disclose how Nagaland is revising its strategies and adapting to the growing challenge taking cues from success stories of other Indian states. 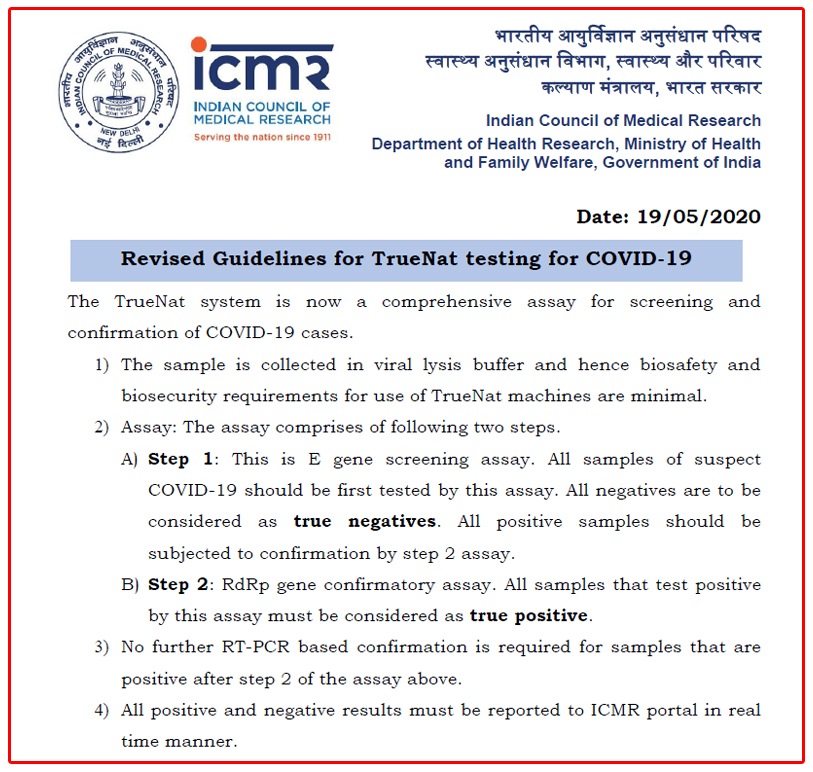 BSL versus TrueNat
The RT-PCR demands an elaborate setup entailing huge logistics, highly trained personnel and research scientists (altogether at least 6). The TrueNat is a table-top micro PCR that needs just any dedicated room and can be operated by one trained lab technician. Stretched to the limit, the RT-PCR can handle a maximum of about 600 tests in one day depending on the availability of manpower; the TrueNat can handle about 40 plus tests (depending on its capacity) in one day. While inadvertent lapses and analytical errors can’t be ruled out, both RT-PCR and TrueNat have high sensitivity which means least chances of false negatives. RT-PCR deals with live virus, while TrueNat deals with inactivated virus making it safe despite not being housed in a controlled environment.
Paying a heavy price
The BSL-3 at the Naga Hospital Kohima is overburdened, and has a backlog of cases. This is not just hampering the fight against the spread of COVID-19, but also causing burnout of the personnel manning the lab. Sources inform that medical personnel at BSL-2 lab at CIHSR in Dimapur were driven to exhaustion, while the tension at the lab in NHK is “phenomenal.” The CIHSR lab is currently closed after several staff of the institute also tested positive for COVID-19.
Above all, the dependency on the Bio-Safety Labs is taking a heavy toll on finances. Conducting 100 tests on RT-PCR in one day incurs around Rs.4 lakh. The same number of tests in one day using TrueNat would cost around Rs.1.35 lakh. The expense incurred on manpower at a BSL-3 or BSL-2 is approximately Rs.3 lakh in a month, while only Rs.25,000 will get the services of a lab technician. Even if three TrueNat machines are employed (for 100 tests in one day), the monthly manpower cost comes to around Rs.75,000.
Currently in Nagaland, the RT-PCR is being used for rapid mass screening and for repeat testing as well and validating TrueNat tests. “This is not feasible. We will exhaust all our resources as it incurs a high cost both financially and in terms of manpower if we continue using the RT-PCR for all contact tracing tests,” a Dimapur-based pathologist said.
“Both (RT-PCR and TrueNat) are required looking at the magnitude of the problem. Logically speaking even Dimapur COVID-19 Hospital and the Chumukedima CHC should have had the RdRp confirmatory chips for TrueNat to lessen the burden on both the BSL labs, as such results are getting delayed due to overload,” he opined.
Nagaland Page tried to independently ascertain how many TrueNat machines are running the confirmatory tests. Peren and Tuensang are two districts which have acquired the cartridges for the confirmatory tests on TrueNat, although the Peren facility seems to have run out of the confirmatory cartridges.
Nagaland Page had earlier reported how a mass-based organization had procured the confirmatory cartridges for the Peren COVID facility to help the district battle the pandemic.
When Nagaland Page contacted a senior Government official in the H&FW Department, he informed that altogether 29 TrueNat micro-PCRs are in use for COVID-19 testing all over the state. Out of 29, 20 have been procured by the Government, two by Nagaland State Disaster Management Agency and rest by individuals/organizations. When asked about how many TrueNat facilities are running the confirmatory tests along with the initial screening test, his reply was, “Kindly call up the districts.” Certain district officials claimed they are not authorized to speak to the Press.
A senior doctor of a reputed hospital in Dimapur categorically stated that the State Government should facilitate key private hospitals to acquire TrueNat. “Private hospitals are not able to treat patients as they have to wait for results from BSL labs; how can we admit a serious patient without ascertaining whether he/she is positive or negative. And the BSL facilities are already overburdened. We can’t risk infecting other patients and staff.”

The State Government had advised private hospitals to apply for ICRM approval as per guidelines. But another doctor felt that it would be more feasible if the Government approaches the ICMR and procures the TrueNat machines for the private hospitals on a cost sharing basis. He also berated the ICMR for making “foolish rules in such a disaster situation.” “In a disaster situation such as this, we need to move very fast and cannot afford to waste time pushing files and navigating red tape.” He advocated that private hospitals be allowed to use Truenat under an MOU whereby the Government installs Truenat machines in their facility on a Government-Private partnership and stipulates a price cap on tests.
The doctors also are of the opinion that the State Government also should function in a more decentralized manner during such a challenging situation to ensure better efficiency. “Few people are making all the big decisions and most of us are in the dark about who is advising the Government. The Government should make prudent choices about who they choose to listen to. It needs to know who to partner with and who take advice from, and back up each decision with solid data and research. Otherwise the Government of the day becomes vulnerable to political pressure and whims of organizations.”
Two specialists, on conditions of anonymity, told Nagaland Page that the Nagaland Government which was caught unprepared has committed the folly of not roping in experts in the field of virology and epidemiology as consultants. Experts, and not bureaucrats, should be the face of Nagaland’s fight against the pandemic to give people more confidence in the strategies of our Government, and also hope, one of them further stressed
Footnote
According to a proposal being tabled to the Government, Nagaland needs to up its game in its fight against COVID-19, and ensure judicious use of funds.
The proposal states that random RT-PCR testing of asymptomatic contacts should be stopped, and contact testing of only the symptomatic primary contacts be done using TrueNat. It stresses on a clinical monitoring mechanism of all contacts using community volunteers. It also rules out the validation of Truenat confirmatory positive (RdRp gene) cases by RT PCR, since the patients would even otherwise be isolated and put under observation.
While there are encouraging reports on the COVID-19 vaccine front, it is still unclear when an effective vaccine would be available in the market. So Nagaland, as well as most parts of the world, has to dig in for a long fight while also sustaining the economy.
Four types of tests are being used in India to investigate the COVID-19 infection and battle it. Rapid Antigen tests, and Antibody tests are the other two more economic options, albeit less effective than RT-PCR and TrueNat. According to a senior Naga doctor, Nagaland needs a holistic strategy employing the prudent use of the four available test mechanisms to confront the challenging circumstances brought about by the pandemic.