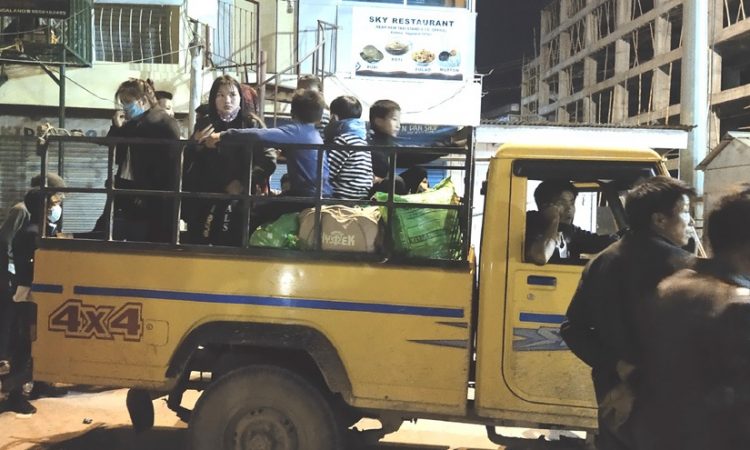 Kohima, May 7: In a daring move to meet the window period of three days inter-district movement for stranded people to go back to their respective villages, a group of children from Tepun village under Tening sub-division in Peren district started their daring journey at around 6:30 pm Thursday night from Kohima.
The children, most of them below 13 years of age were reportedly staying in the houses of different people in Kohima for varied reasons.
All of them gathered at New NST Zonal Taxi Stand, where the open pick-up vehicle along with driver and two adults were waiting to take them home.
The children along with their rucksacks and baggage got into the open vehicle before heading for the native village – Tepun in Peren district, which is about 167 kms from Kohima via Jalukie at around 6:30 pm tonight.
The vehicle was hired by the villagers, said an adult travelling along with the kids.
The driver said that they would directly head for the village which would take not less than 6-7 hours. “Biya napabi… upai nai eneka he bosti jabo,” he said in Nagamese.
Nonetheless, with children on the back and considering the road condition, the journey is likely to be lengthier than usual.
According to a local guardian, who came to drop a child and didn’t want to be identified, said he was called up by the parents and informed that the village people have arranged vehicle to ferry their children back.
The local guardians here had reportedly asked the villagers to arrange or seek for government facility to take them, but it did not work out.
He said the village had reportedly asked the parents to bring back the children in the vehicle being sent today or else they would not be allowed to enter the village and also debarred from availing any facilities. (Page News Service)