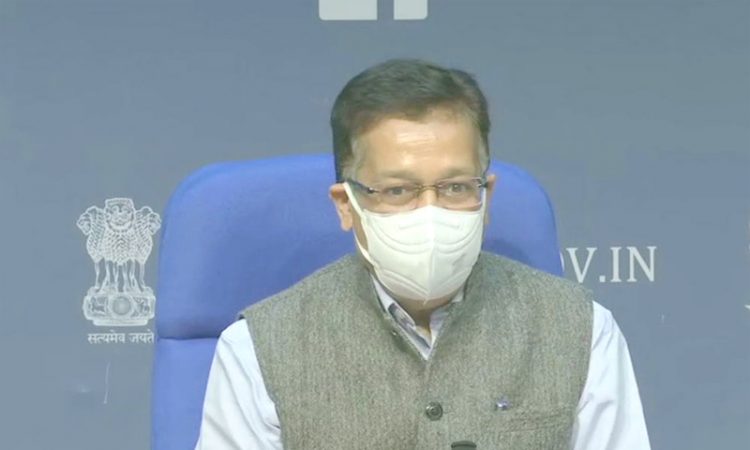 New Delhi, November 10: India has conducted the second highest number of tests for detection of COVID-19 in the world at 11.96 crore with rapid antigen tests comprising 49% and RT-PCR 46% of the total tests done till Tuesday morning, the Union Health Ministry said.
Five per cent tests were carried out using CBNAAT and TrueNat till this morning, it said.
Union Health Secretary Rajesh Bhushan told a press conference that despite such high number of tests conducted in India, the positivity rate is reducing and it has come down to 7.18%.
The positivity rate of 24 hours in the last week was 4.2%, he said.
“More than 11.96 crore COVID-19 tests conducted in India till now, which is the second highest in the world. On an average, 11,18,072 tests were conducted daily last week,” Bhushan said.
“If we take into account last two weeks’ figures, we are testing more than any other country in the world,” he said.
Asked whether Delhi has reached community transmission stage and if cases would increase during festivals, Bhushan said at the time of festivals or marriage when people gather and do not follow COVID-19 appropriate behaviour, there are chances of the infection spreading.
“Discussion on community transmission is quite often informed by less than adequate information and facts. It should rather be based on science and facts,” he said.
In India, 46 per cent of the tests conducted for detection of COVID-19 till Tuesday morning were RT-PCR tests, 49% were rapid antigen tests and five per cent tests were carried out using CBNAAT and TrueNat, Bhushan said while responding to another question.
He said that India recorded an average of three new COVID-19 deaths per million population in the last seven days, while the global average stood at seven new deaths per million population.
“In India, 235 new cases per million population were reported in the last seven days, whereas the global average of new cases per million population stands at 482,” he said.
“India’s COVID-19 recoveries have crossed 79 lakh, which is the highest in world; on an average, 51,476 people recovered daily in the last week,” he said.
Bhushan also said that 62% of new COVID-19 deaths in the last 24 hours were reported from Maharashtra, Delhi, West Bengal, Uttar Pradesh, Kerala and Punjab.
While, 54% of new cases of COVID-19 were reported from Delhi, West Bengal, Kerala and Maharashtra, the secretary said.
COVID-19: India records single day rise of over 38K new infections, 448 more deaths
India’s COVID-19 caseload rose to 85,91,730 with 38,073 infections being reported in a day, while the number of people who have recuperated from the disease surged to 79,59,406 pushing the national recovery rate to 92.64%, according to the Union Health Ministry data updated on Tuesday.
The coronavirus death toll climbed to 1,27,059 with 448 new fatalities, the data updated at 8 am showed.
The COVID-19 case fatality rate stands at 1.48%. The number of active cases remained below 6 lakh for the twelfth consecutive day.
There are 5,05,265 active cases of coronavirus infection in the country as on date which comprise 5.88% of the total caseload, the data stated.
India’s COVID-19 tally had crossed the 20-lakh mark on August 7, 30 lakh on August 23 and 40 lakh on September 5.
It went past 50 lakh on September 16, 60 lakh on September 28, 70 lakh on October 11 and crossed 80 lakh on October 29.
According to the Indian Council of Medical Research (ICMR), a cumulative total of 11,96,15,857 samples have been tested up to November 9 with 10,43,665 samples tested on Monday. (PTI)