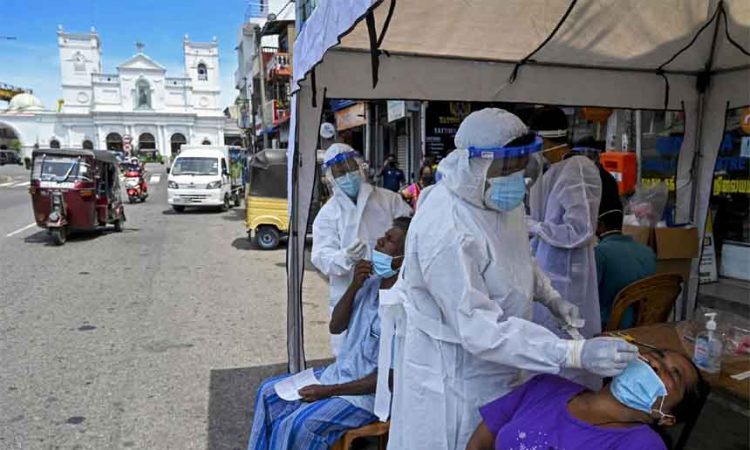 NEW YORK, MAY 11: Early in the pandemic, there was hope that the world would one day achieve herd immunity, the point when the Coronavirus lacks enough hosts to spread easily. But over a year later, the virus is crushing India with a fearsome second wave and surging in countries from Asia to Latin America.

Experts now say it is changing too quickly, new more contagious variants are spreading too easily and vaccinations are happening too slowly for herd immunity to be within reach anytime soon.
That means if the virus continues to run rampant through much of the world, it is well on its way to becoming endemic, an ever-present threat.
Virus variants are tearing through places where people gather in large numbers with few or no pandemic protocols, like wearing masks and distancing, according to Dr David Heymann, a Professor of Infectious Disease Epidemiology at the London School of Hygiene and Tropical Medicine.
While the outbreak in India is capturing the most attention, Dr Heymann said the pervasive reach of the virus means that the likelihood is growing that it will persist in most parts of the world.
As more people contract the virus, developing some level of immunity, and the pace of vaccinations accelerates, future outbreaks won’t be on the scale of those devastating India and Brazil, Dr Heymann said. Smaller outbreaks that are less deadly but a constant threat should be expected, Dr Heymann said.
“This is the natural progression of many infections we have in humans, whether it is tuberculosis or HIV,” said Dr Heymann, a former member of the Epidemiology Intelligence Service at the Centers for Disease Control and Prevention and a former senior official at the World Health Organisation.
“They have become endemic and we have learned to live with them and we learn how to do risk assessments and how to protect those we want to protect.”
Vaccines that are highly effective against COVID were developed rapidly, but global distribution has been plodding and unequal. As rich countries hoard vaccine doses, poorer countries face big logistical challenges to distributing the doses they manage to get and vaccine hesitancy is an issue everywhere. And experts warn the world is getting vaccinated too slowly for there to be much hope of ever eliminating the virus.
Only two countries have fully vaccinated more than half of their populations, according to the Our World in Data project at the University of Oxford.
They are Israel and the East African nation of the Seychelles, an archipelago with a population of fewer than 100,000. And just a handful of other countries have at least partially vaccinated nearly 50% or more, including Britain, tiny Bhutan, and the US.
Less than 10% of India’s vast population is at least partly vaccinated, offering little check to its onslaught of infections.
In Africa, the figure is slightly more than 1%.
Still, public health experts say a relatively small number of countries, mostly island nations, have largely kept the virus under control and could continue keeping it at bay after vaccinating enough people. New Zealand, through stringent lockdowns and border closures, has all but eliminated the virus.
Dr Michael Baker, an Epidemiologist at the University of Otago who helped devise the country’s Coronavirus response, said New Zealand would likely achieve herd immunity by immunising its population, but it has a long way to go with only about 4.4% of New Zealanders at least partially vaccinated.
“All of the surveys show there is a degree of vaccine hesitancy in New Zealand, but also a lot of people are very enthusiastic,” Dr Baker said. “So I think we will probably get there in the end.”
While new daily cases have remained at near-world record levels, the number of deaths has dropped from a peak in February, going against the normal pattern of high cases followed eventually by high deaths.

If that trendline continues, it could offer a glimmer of hope for a future scenario that scientists are rooting for: Even as the virus spreads and seems to be hurtling toward becoming endemic, it could become a less lethal threat that can be managed with vaccines that are updated periodically to protect against variants.
“It may be endemic, but not in a life-threatening way,” Dr Michael Merson, a Professor of Global Health at Duke University and former Director of the World Health Organisation’s Global Programme on AIDS said.
“It may be more like what we see with young kids, a common cold like disease.” (NYTNS)