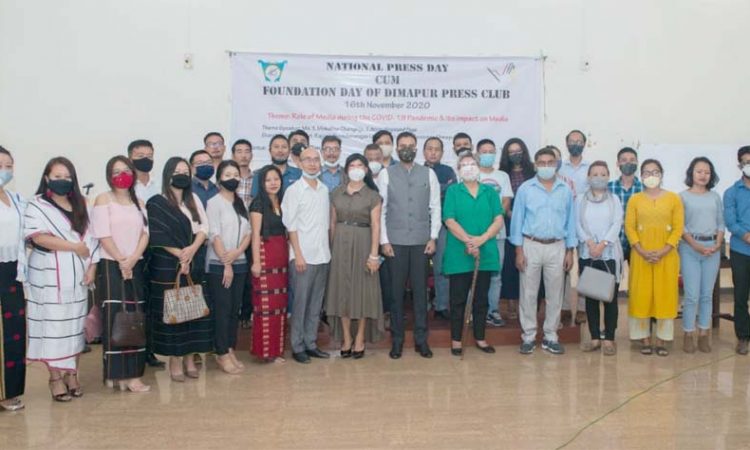 DIMAPUR, NOVEMBER 16: As Journalists across the country celebrated National Press Day today, Editor & Publisher of Nagaland Page, Tiamerenla Monalisa Changkija maintained that the Fourth Estate has lived up to the roles and responsibilities and met the expectations of our people despite the constraints faced every day and in the process, the media of the state exposed the Government’s lies about the quality of healthcare delivery system and enabled the people’s grievance and angst each the state Government’s ears.

She was speaking on the theme, “Role of media during COVID-19 pandemic and its impact of media”, at the National Press Day celebrations, organized by Dimapur Press Club at Tourist Lodge here.
Monalisa Changkija stated that though much neglect and corruption were exposed, she observed that the media failed in its inability, or unwillingness, to further expose specific instances of neglect and corruption and hold the Government, or those directly involved, accountable.
“If we lose sight of, and let our guard down from, constitutional provisions and the imperatives of transparency and accountability of those in power, we will fail in our role as the watchdog of society and negate the very reasons for our existence. This, no society, no democracy can afford,” she said.
She said that the collapse of the state’s healthcare delivery system occurred simultaneously with the exposure of defectiveness and incompetence of the overall civil and police governance, which not only threw light on various other neglect and corruption but also gross civil and human rights violations.
“This in turn exposed how ill-trained our personnel in Police Force are. Once again, we stopped at exposure and failed to hold anyone accountable. This definitely reflects that justice was denied to the people. Otherwise, how do we explain that a good number of people were randomly physically assaulted across the state ostensibly for violating lockdown rules and other reasons but the perpetrators were never held accountable and penalized,” she continued.
Changkija, in her speech, pointed out that while there is a conception among the younger generation that media in Nagaland is a recent development, in fact, the origins of the present form of the Fourth Estate in Nagaland dates back to much before Indian Independence.
She said that from the 1960s till the 1990s, there were several weeklies, based at Kohima and Dimapur, which folded up in the late 1980s and early 1990s due to various reasons.
“Many may not be aware but Ao Milen, based at Mokokchung, started in the 1930s,” she said.
She called for the need of social auditing by the media to ensure transparency and accountability in the public domain citing the example that during the pandemic a good number of masks, sanitizers, and bags of rice, etc. were “donated” by several Ministers and MLAs across the state but the people don’t know whether they were paid for from their personal purses or from various heads of accounts of numerous Government Departments.
Addressing the issue of the impact of the pandemic on the media, Changkija said that local papers’ circulations and revenues have reduced drastically here which have severely impacted individual journalists and non-journalists working in the local media and added that today the media houses are facing challenges and struggles that demand grit and ability to evolve into a stronger institution, which meets the needs and challenges society and state are confronting now without compromising on the core values of the Fourth Estate in a democracy.
DC Dimapur expresses concern over fake news, ‘doom-scrolling’
Deputy Commissioner of Dimapur, Rajesh Soundararajan (IAS), who was the Guest Speaker, called the prevalent fake news in the society a menace and mentioned that the media has a very important role in containing it.
He said that the credibility that the media has is unmatched and unparalleled and it plays an intangible part in shaping the collective consciousness of the people which is the core of the society.
According to Soundararajan, besides fake news, there is a negativity that is seeping through the society called “doom-scrolling” where people are concentrated only towards finding negative news and this should be addressed.
He added that while criticism is necessary, doom-scrolling is not going to do any good and one should be careful and avoid being trapped in the vicious cycle of such scrolling.
In his remark, he appreciated the efforts that are being put by media professionals of the state towards authenticating news from reliable sources and mentioned that he had been to different places and witnessed irresponsible journalism but is impressed by the quality of journalism that is being maintained here.
K Temjen Jamir, Editor, Tir Yimyim, who also spoke on the occasion called the day the “most important” for the media fraternity and said that this pandemic is a time to identify and recognize those who are at the frontline and those making a difference through innovations and bring their stories to the notice of the people as well as suggested the inclusion of the media personnel in the district task forces.
He also spoke on the need of investigative journalism in the state calling it the best tool to fight corruption.

Earlier, delivering a brief note on the Foundation Day of DPC, Dilip Sharma, Executive Editor, Nagaland Page, and the Treasurer and Founding Member of DPC said that the Club was formed in November 1999 with the initiative of four members and narrated a brief history and list of activities that the Club carried out since its inception.
Earlier the welcome address was delivered by Filip Sumi, President, DPC, while the vote of thanks was rendered by Tiamongba Aier, General Secretary, DPC.
Akangjungla, Information Secretary, DPC, chaired the programme.
(Page News Service)