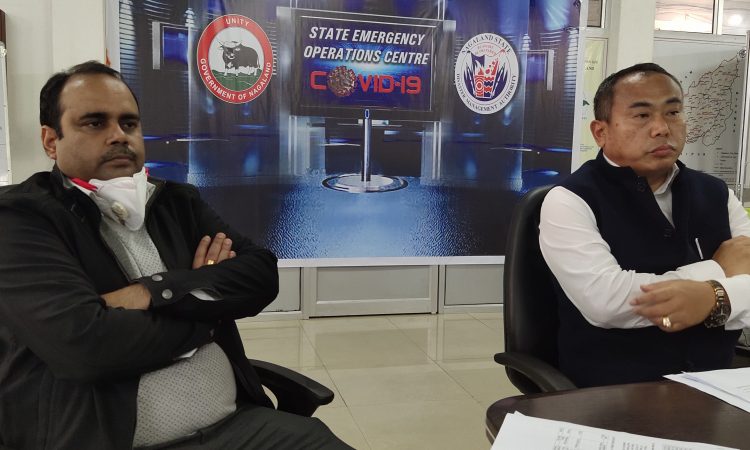 Kohima, May 6: Minister for Planning & Coordination, Land Revenue and Parliamentary Affairs, Neiba Kronu today said that as a resource crunch state, Nagaland has got the lesson to be self-reliant by improving the agri and allied sector.
“The present situation is not only to talk of COVID-19 but also on how we can be self-sufficient, especially in the food sector,” said Minister Kronu, who is also the government spokesperson for COVID-19, while interacting with media persons at State Emergency Operation Centre (SEOC) Keziekie here.
The COVID-19 pandemic has shown us that being a resource crunch state, we should take farming more seriously as the State’s land is one of the youngest in the world capable of growing anything.
“Our climatic condition is very good and therefore we should not be lacking anything”, he said, adding that the state’s agri & allied sectors have to move faster while all of us have to be actively involved.
Kronu said yesterday he had lengthy discussion with the prominent entrepreneurs of the State including Entrepreneurs Associate, Organic Connect and YouthNet to deliberate on the possibilities of enhancing the state’s economy through agri & allied sector.
The government led by Chief Minister Neiphiu Rio has a major concern towards improving these sectors and would be having meeting with farming community and entrepreneurs on May 9 in Kohima, he said.
With the present economic condition of the country, Government of India may not grant funds in future to the present extent, and therefore we have to prepare ourselves, he said.
Acknowledging that in the past agri & allied sectors and the APMC have not been able to perform to the expected level, he said, “now we have to change the strategy and all have to be active”.
He also asserted that government will strategize ways to provide assured market linkage to the producing farmers of the State.
He also said that the government is working our measures to activate the functioning of Veterinary and Animal Husbandry department in the State so as improve the meat productivity and also production of animal feeds within the State so as to discourage import of pork and vegetables from outside the state.
In this, he said that being seed sowing season, the government has permitted inter-district movement of the stranded citizens to go to their own district and work. Also stranded students would be allowed to move, he said adding that the government is making arrangements by requisitioning the NST and departmental buses.
Those using the government transport will be free but not the private vehicle users, he said.
On those stranded in other parts of the country, Kronu said the government does not want to encourage them to come back, but if the situation demands and whoever comes back will have to undergo the quarantine period before leaving for their respective places.
He revealed that currently the government has list of around 23,000 people from Nagaland stranded in different states. This includes more than 6000 students, around 16,000 working people and more than 300 patients, he said.
The number of returnee is huge and if the entire log is to come, it will be difficult to manage them in quarantine centre, he said, adding that the Empowered Committee have been tasked to categorize the persons to be brought back to the State.
On the funds received for COVID-19 pandemic from Central government, Minister Kronu said so far a total of Rs 17.59 crore, including Rs 7.42 crore from GoI, Rs 3 crore from NEC and Rs 7.17 crore from the SDRF.
The minister asserted that Health & Family Welfare department is pressing hard to make the BSL-3 lab functional and it would be ready within a week’s time. The setting up of BSL-2 lab in Dimapur is also in progress, he said.
He said till date, a total of 763 samples have been sent for testing from the State.
Results of 712 samples have been received and all are negative, he said, adding that results for 51 samples are awaited. Today a total of 3126 persons have been screened and a total of 80 persons are under Facility Quarantine.
On the cumulative screening of people, he said a total of 1,66,655 people entering the state through air, railway and roads have been screened since February last.
He said that of the total, 391 people, including 8 health workers were put under government facility for quarantine while 6918 were advised for home quarantine.
While maximum of them are out of quarantine period, he said currently 80 are under facility quarantine.
Principal Secretary (Home) Abhijit Sinha, who was also present during the briefing, said the inter-district transport of stranded people will start leaving from Thursday morning till May 9. While sufficient buses have been arranged for this purpose, he said if required private buses will also be requisitioned and also duration of inter-district movement will be extended.
Besides the funding from Central government, Sinha said the Centre has sanctioned 59,696 quintals of rice for priority households and 10,538 quintals for AAY beneficiaries along with 2,849 quintals of pulses per month. This would be distributed free to the beneficiaries and continue for three months, he said.
He also revealed that the state government through the NSDMA is also given 35,500 quintals of rice, which is being distributed through the respective District Disaster Management Authority. (Page News Service)