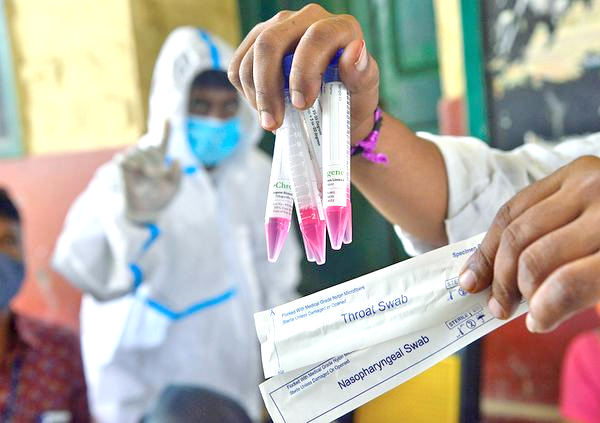 DIMAPUR, JULY 21: The Kohima Bench of Gauhati High Court has directed the Government of Nagaland to ramp up COVID-19 testing in the State.

The Court gave the direction after going through information placed before the Court by the State Health & Family Welfare Department that the average number of people tested in a day in Nagaland is only about 900 whereas in neighbouring States it is much higher.
“We, therefore, direct the respondents to ramp up the testing”, said Justice Songkhupchung Serto and Justice S Hukato Swu in an order after hearing a PIL (Suo Moto) on Tuesday,
“If more people are tested it is more likely that we will see more number of people infected”, the order said, while directing the State respondent to file an affidavit showing the steps taken by them on or before the next date of hearing.
High death rate
The Court also expressed concern that Nagaland has the highest COVID death rate in the North East India. It said though the number of infected persons in the State everyday appears to be quite low, the death rate is a matter of concern for all who are in the State.
The Court also expressed concern on the high positivity rate in 5 districts of the State ~ Wokha 40%, Tuensang 10.34%, Longleng 20%, Kohima 13.25% and Mokokchung 5.26%. It directed the Government to take some more special steps to contain the spread of the virus and for treatment of people who are already infected in those 5 districts.

Vaccination
On vaccination, the State’s affidavit filed on July 19, 2021 showed that the total targeted population who are eligible for vaccination are 13,54,722 and out of that 5,19,938 have received 1st dose and 97,552 have received the 2nd dose. As on July 19, 2021, the total number of vaccinated persons has risen to
5,65,055, 1st dose and 1,21,763 have received the 2nd dose.
The affidavit also stated that pursuant to the directions issued by the Court to complete vaccination within 3 months, the Government is on war footing mode and taking all steps and actions to meet the target by making sufficient vaccines available and man power to carry out the vaccination.
With this assurance given, the Court said it expects the respondents will continue to work on war footing mode so that the State achieves the desired target within the time period given. It asked the respondents to file an affidavit showing progress made in vaccination on the next date of hearing.
On the direction issued regarding vaccination of health workers, the affidavit showed that necessary orders have been passed and efforts are being made to vaccinate those who have not been vaccinated and also to ensure testing of those who are not vaccinated when they report for duty.
Since the last date of hearing, some progress has been made and there are only about 9000 health workers who are yet to be vaccinated, the affidavit said. The Court asked the authorities in the Health Department to carry out awareness campaign even among health workers so that full vaccination status can be achieved in the State.
Regarding priority vaccination of shopkeepers and vegetable vendors, the Court observed that as per the affidavit necessary orders have been issued on July 13, 2021. On the next date fixed, it directed the respondents to file an affidavit showing progress made in this regard.
Schools/college reopening
On the Government’s decision to open colleges from July 26 and higher secondary schools from August 2, the Court said while going through the order of the Home Department, “we see nothing regarding the SOP to be followed by the students including their vaccination status or testing norms to be followed.”
“We hope the Home Department will keep these in mind and issue appropriate SOP before the colleges and schools are open”, it said.

Posting of medical staff
In respect of the Court direction to CMOs to submit a report each on the posting of medical staffs in their respective districts, the affidavit stated that the CMOs of Peren, Dimapur, Mon, Mokokchung, Kohima, Phek and Naga Hospital Authority have submitted their reports but CMOs of other districts are yet to submit.
The Court directed the Principal Secretary and Principal Director of H&FW to ensure that the required reports are received by them and place them before the next date of hearing.
Oxygen Plants
Regarding oxygen plants, Counsel for the respondent submitted that oxygen plants have been installed and made operational at 5 districts but in 6 district headquarters, the installation works are either not yet completed or are still awaiting certification.
Observing that since the 2nd wave of the pandemic is not yet over and the 3rd wave is expected soon, the Court directed the respondents to expedite installation of the oxygen plants in those districts so that they are made operational at the earliest.
(Page News Service)