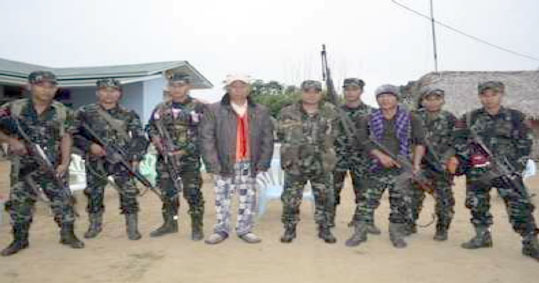 GUWAHATI, August 17: The Myanmar-based NSCN (K) on Friday impeached its chairman Khango Konyak, an Indian-origin Naga, and elected the outfit’s founding chairman, late Shangwang Shangyung Khaplang’s nephew, Yung Aung as the new ‘acting chairman’ of the organisation.
Indian intelligence agencies see this development as a bloodless coup by Myanmar-origin Naga member of NSCN (K) to throw out an Indian-origin Naga leader.
The outfit in a statement said that it was unanimously resolved to impeach Khango “to save the party from further breakdown and confusion.” The outfit has given Khango a safe passage to go wherever he likes without any harm.
Aung, 45 years old, studied in Manipur till his graduation and is known to be an expert in martial arts and polo.
Khango has left the NSCN (K) headquarters in Sagaing region of Myanmar along with some of his loyalists.
Few top leaders of Indian-origin are believed to have gone with Khango. When Khaplang, a Hemi Naga from Myanmar, died in June last year and the leadership was passed on to
Khango Konyak, a Naga from India, it gave Indian government hopes of breakthrough with the outfit, the only Naga outfit which is outside the peace process, as it tries to work out an all-inclusive solution to the Naga political problem. Indian security forces believed that would always be easier to talk to the leadership of Indian origin than that of Myanmar. NSCN (K) abrogated the ceasefire with the Indian government in 2015.
Apart from Khango, the outfit’s powerful army commander, Niki Sumi, is also an Indian-origin Naga.
The NSCN(K), which is based in Myanmar, wants an agreement with the Myanmar government to cover ethnic Nagas living in India who are known as western Nagas. Those in Myanmar are locally known as eastern Nagas but the outfits believe that both belong to one Naga territory despite the international border dividing them.
NSCN (K) has a ceasefire agreement with Myanmar since April 2012 and has refrained from clashes since 2000. Recently the Myanmerse
government has made it clear that it would not allow NSCN (K) to sign the national peace agreement if does not give up its demand for separation.
The NSCN (K) impeachment statement said that Khango was found guilty of grabbing absolute control of powers and functions without collective leadership, non-distribution of powers and functions exposing a one-man-government policy, which was completely in violation of the party’s constitution and discipline. (TNN)