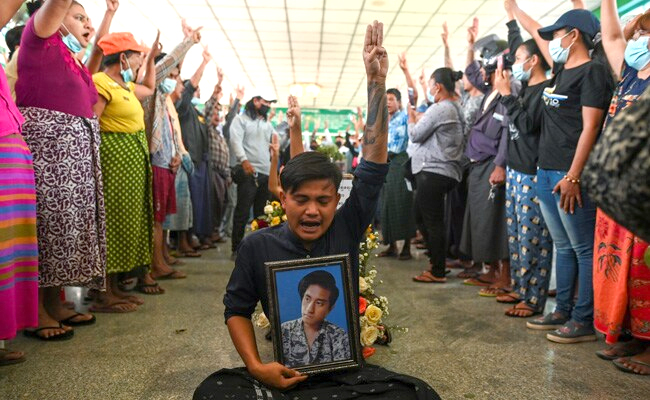 People flash a three-finger salute as they attend funeral of victims killed during the anti-coup protest.

YANGON, March 5: Electricity supply was cut across many areas of Myanmar on Friday because of a “system breakdown”, according to multiple government agencies.

People started posting on Twitter and Facebook about the widespread blackouts across commercial hub Yangon at around 1:30 pm local time (0600 GMT).
“A system breakdown is causing power outages across the country,” reported Yangon Electricity Supply Corporation in central Yangon’s Yankin township.
Further north in the city of Magway, along the Irrawaddy River, the region’s Electricity Supply enterprise reported the same.
Netizens on Facebook — an extremely popular platform in Myanmar — similarly reported electricity blackouts in other parts of the country.
The supply cut comes as the junta has tightened its chokehold on communications, blocking social media platforms — which people have skirted by downloading VPNs — and imposing a nightly internet shutdown.
Myanmar has been in turmoil since the February 1 coup that ousted civilian leader Aung San Suu Kyi from power, with soldiers and police escalating the use of force on the streets to quell nationwide protests.
1 Myanmar protester killed ahead of UN Security Council meeting on crisis
Police in Myanmar on Friday opened fire on protesters against last month’s military coup, killing one man, as international condemnation rained down on the junta ahead of a United Nations Security Council meeting to discuss the crisis.
The violence took place as the military lost a tussle over leadership of its UN mission in New York and the United States announced new sanctions targeting military conglomerates after the deaths of dozens of civilian protesters.
Activists demanding the restoration of the elected government of veteran democracy champion Aung San Suu Kyi held more demonstrations in several towns and cities, with a crowd of thousands marching peacefully through the second city of Mandalay.
“The stone age is over, we’re not scared because you threaten us,” the crowd chanted.
Police opened fire and one man was killed, witnesses and a doctor told Reuters by telephone.
In the main city of Yangon, police fired rubber bullets and stun grenades to disperse protesters who had been joined by about 100 doctors in white coats, witnesses said.
Crowds also gathered in the town of Pathein, to the west of Yangon, and in central Myingyan, where dozens of women in straw hats held up signs calling for Suu Kyi’s release, witnesses said.
On Thursday, police broke up rallies with tear gas and gunfire in several cities but their crackdown was more restrained than on Wednesday, when the United Nations said 38 people were killed in the bloodiest day of protests.
In all, at least 55 people have been killed since the Feb. 1 coup.
UN human rights chief Michelle Bachelet demanded the security forces halt what she called their “vicious crackdown on peaceful protesters”. Bachelet said more than 1,700 people had been arrested, including 29 journalists.
A spokesman for the ruling military council did not answer telephone calls seeking comment.
Singapore has been the most outspoken of Myanmar’s neighbours and its foreign minister, Vivian Balakrishnan, said it was a “national shame” for armed forces to use weapons against their people.
The International Federation of Red Cross and Red Crescent Societies said some Red Cross volunteers had been injured and wrongfully arrested and Red Cross ambulances had been damaged. It called for a halt to the violence.
The military seized power on Feb. 1, saying that the landslide victory of Suu Kyi’s National League for Democracy (NLD) in an election in November was fraudulent. The electoral commission has said the ballot was fair.
The junta has promised to hold new elections at an unspecified date, but activists have rejected that and demand the release of Suu Kyi, who has been held in detention since the coup.
DISOBEDIENCE
Condemnation of the coup and subsequent violence has come largely from the West, with Mynamar’s Asian neighbours, including India, mostly more restrained. The junta can count on some support from Russia and China – a major investor – at the United Nations.
The military has weathered isolation and sanctions during previous eras of rule by generals and has indicated it will not be swayed this time round.
The U.N. human rights investigator on Myanmar, Thomas Andrews, urged the Security Council – which meets to discuss the situation later on Friday – to impose a global arms embargo and targeted economic sanctions on the junta.
The United States has told China, which has declined to condemn the coup, that it expects it to play a constructive role. China has said stability is a top priority.
The military, which ruled directly for nearly 50 years until it embarked on a tentative transition to democracy a decade ago, has been struggling to impose its authority on a country where many people abhor the thought of a return of army rule.

A civil disobedience campaign of strikes running parallel with the protests has been supported by many government workers including a trickle of policemen. Nineteen policemen crossed into India this week fearing persecution for disobeying orders, Indian police told Reuters.
More than 10 Myanmar diplomats in foreign missions have also declared their support for the pro-democracy campaign, the Irrawaddy news outlet reported. In Washington, it was unclear whether Myanmar’s embassy was still representing the junta.
Opposition to the junta has also united people across the ethnically diverse country.
In eastern Myanmar, former insurgents from the Karen ethnic minority guarded anti-coup protesters from security forces, saying in a statement everyone had to work together to end military dictatorship.
In New York, a clash over who represents Myanmar at the United Nations was averted after the junta’s replacement quit and the Myanmar U.N. mission confirmed that Ambassador Kyaw Moe Tun remained in the job.The junta fired Kyaw Moe Tun on Saturday after he urged countries at the U.N. General Assembly to use “any means necessary” to reverse the coup. (AFP/Reuters)