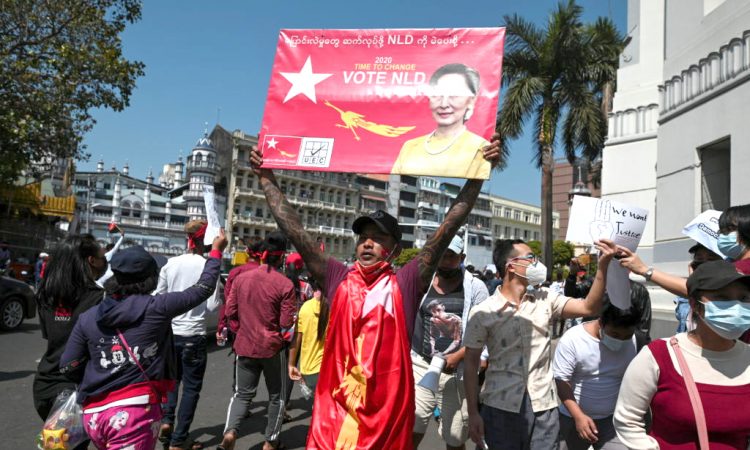 Seoul, February 11: A growing number of governments are curbing diplomatic ties with Myanmar and increasing economic pressure on its military over the coup last week that erased the fragile democratic progress in the long-oppressed Southeast Asian nation.

President Joe Biden said Wednesday he was issuing an executive order that will prevent Myanmar’s generals from accessing USD 1 billion in assets in the United States, and promised more measures.
The US was among many Western governments that lifted most sanctions in the past decade to encourage democratic transition as Myanmar’s military rulers were taking gradual steps toward civilian rule changes that proved temporary with the ousting of the elected government and detentions of Nobel Prize laureate Aung San Suu Kyi and others.
One of the strongest reactions came from New Zealand, which has suspended all military and high-level political contact with the country and pledged to block any aid that could go to its military government or benefit its leaders. It also placed a travel ban on Myanmar’s new military rulers.
We do not recognise the legitimacy of the military-led government and we call on the military to immediately release all detained political leaders and restore civilian rule, Foreign Minister Nanaia Mahuta said Tuesday.
In Washington, Biden said his actions were aimed at freezing US assets that benefit Myanmar’s military leaders while maintaining support for health care programs, civil society groups and other areas. The US already has sanctions in place against some Myanmar military leaders over the killings and persecution of minority Rohingya Muslims.
There has so far been no change in the level of US diplomatic representation in Myanmar, where Thomas Vajda continues as ambassador.
In Brussels, EU foreign policy chief Josep Borrell said European foreign ministers will meet Feb. 22 to review the 27-nation bloc’s relations with Myanmar and explore ways to increase economic pressure. Its options could include sanctions targeting individuals and businesses owned by Myanmar’s military as well as cuts in development assistance.
Since 2014, the EU has granted Myanmar almost 700 million euros (USD 850 million). Borrell said the EU’s special system for granting least-developed countries duty-free and quota-free access to all products except arms and ammunition could also be reassessed.
We now need to develop a robust response to this unacceptable seizure of power, which reverses 10 years of democratic transition, he said, adding that the review would examine how closely we work with the government and its institutions from a legal, financial and technical perspective, as well as the impact on beneficiaries.
The UN Human Rights Council, the 47-member-state body based in Geneva, has scheduled a special session on Friday to consider the human rights implications of the crisis in Myanmar.
Human rights advocates have urged governments to take harsher action, while avoiding penalties that would hurt ordinary Myanmar citizens.
President Biden’s announcement of asset freezes and an Executive Order opening the door for further targeted sanctions on Myanmar’s military are important and welcome steps,” Daniel Sullivan, senior advocate for human rights for Refugees International, said in a statement.
But there is much more that the United States can and must do to censure the military’s egregious behavior and recognize the true threat that the Myanmar military’s seizure of power presents,” he said.
It’s unclear if Myanmar’s neighbours will come together to take meaningful action.
The leaders of Malaysia and Indonesia have urged the Association of Southeast Asian Nations to convene a special meeting to discuss Myanmar, a member state. But ASEAN has long operated on a principle of non-interference in each other’s affairs and its decisions are made by consensus, meaning it would take just a single member, possibly Myanmar itself, to block any move it sees as hostile.
Following the coup, Brunei, the current ASEAN chair, issued a statement calling for the pursuance of dialogue, reconciliation and the return to normalcy in accordance with the will and interests of the people of Myanmar.
Thai Prime Minister Prayuth Chan-ocha, a retired general who himself seized power in a military coup in 2014, told reporters on Wednesday he received a letter from Myanmar’s junta leader, Min Aung Hlaing, asking for Thailand’s support for the democracy in Myanmar. The letter wasn’t disclosed to the media. (AP)