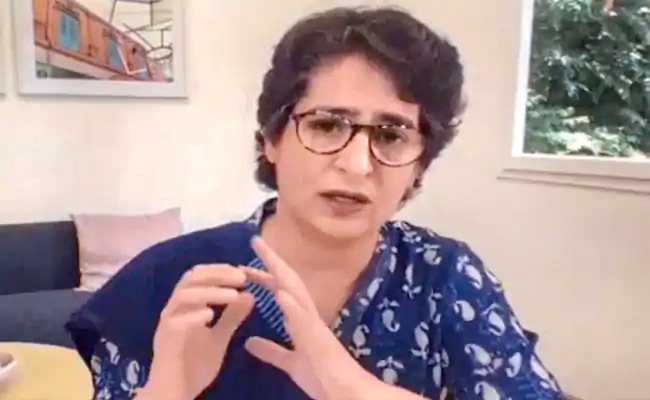 New Delhi, May 25: Congress leader Priyanka Gandhi Vadra on Tuesday alleged that “countless” lives have been lost during the COVID-19 second wave due to the Centre’s “negligence”, and asserted the government must be held accountable so that those in power understand their responsibility towards the country.
Announcing the launch of a ‘Zimmedaar Kaun?’ (who is responsible) campaign through a Facebook post, the Congress general secretary said as part of this exercise she would ask questions of the government on behalf of the people over its handling of the coronavirus pandemic.

Priyanka Gandhi, in her post in Hindi, said that when the second wave of the COVID-19 pandemic struck the country and people struggled for hospital beds, oxygen, vaccines and medicines, they expected the government to make efforts to save lives using earlier preparations and available resources.
However, the government went into a “mute spectator” mode which led to a “painful” situation in the country, she alleged.
In the name of preparation, the government only had a “picture of negligence”, she alleged.
“Exporting vaccines, doubling the export of oxygen in 2020, and compared with other nations, delayed ordering of vaccines whose quantity was also not proportionate to population — on many fronts, the government’s actions were irresponsible,” she said.
The figures of deaths during the second wave and painful photographs of people from across the country depicted how deadly its impact was, the Congress general secretary said.
“The whole country spent those days in a lot of pain. Many people lost their loved ones,” Priyanka Gandhi said.
“And today, when this wave is slowing down naturally, suddenly the government is reappearing through its media and machinery, again our Prime Minister (Narendra Modi) and his ministers have come forward and started making statements,” she said.
“But how did we get here?” she asked.
“One of the world’s largest vaccine producers, one of the largest producers of oxygen, a country whose doctors are famous all over the world — how did we reach a point where our people were losing lives due to lack of oxygen, hospital beds and vaccines,” she said.
Asserting that every Indian’s life is precious, she said the government is accountable towards the people and towards those who have lost their loved ones, and, therefore, it is important to ask questions of the government.
“Countless lives were lost due to the government’s negligence. Therefore, questions need to be asked,” Priyanka Gandhi asserted.
“Questions are also needed to be asked so that the government put forward a full blueprint of preparations with transparency before the citizens of the country,” she said.
Questions need to be asked so that the people in power understand their responsibility and accountability towards this country, Priyanka Gandhi asserted.

“So we have to ask Zimmedaar Kaun?’ (Who is responsible)? In the coming few days, under the ‘Who is responsible’ campaign, I will put some facts before you, so that you understand the reason for the current pathetic situation,” she said, launching the campaign.
“On your behalf, I will ask the central government some questions that they have a duty to answer. Your cooperation and suggestions are welcome,” Priyanka Gandhi said in her social media post.
The Congress has been critical of the Centre’s handling of the Covid situation in the country, but the government has dismissed the criticism of the Opposition party, accusing it of politicizing the pandemic. (PTI)