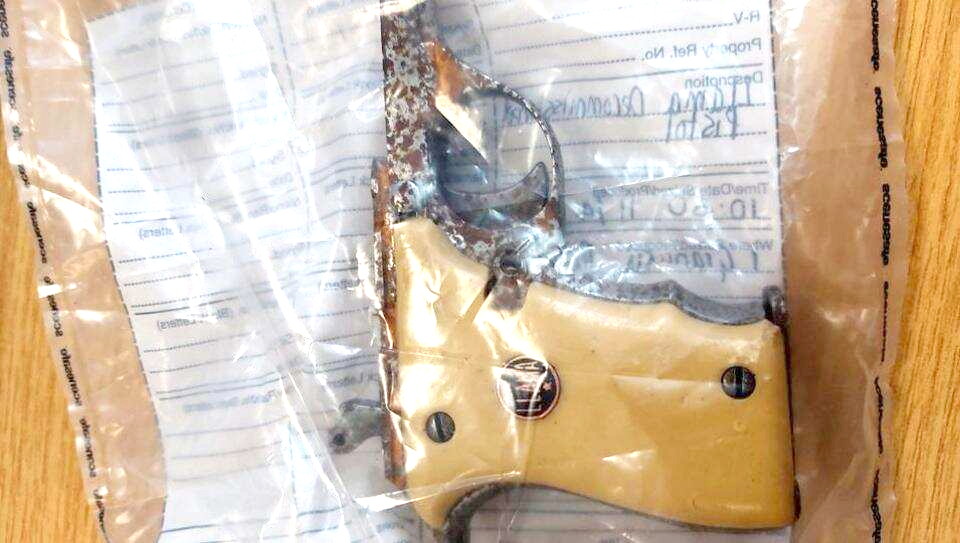 A handout photograph released by the Metropolitan Police in London on Monday shows a yellow-handed Llama pistol, which featured in James Bond 007 movie Die Another Day, which has been recovered by police following a burglary in London. Other guns stolen in the heist are still to be found. (AFP)

London, September 21: Scotland Yard on Monday issued a new appeal for information related to a burglary in north London in which five firearms used in iconic James Bond films were stolen on March 23 when they were due to be showcased in a national exhibition.
The guns were stolen from a house in Enfield. The police released new CCTV footage that shows a vehicle parked on the street where the offence took place before the burglary. The suspects are described as three white men with eastern European accents.
One Beretta ‘Cheetah’ Auto Pistol featured in Die Another Day; one Walter PP featured in A View to a Kill; one Revolver Smith and Weston 44 Magnum featured in Live & Let Die; one Beretta ‘Tomcat’ Auto pistol featured in Die Another Day; and one Llama 22 cal featured in Die Another Day were stolen.
The yellow-handed Llama pistol was recovered by a member of the public in a field in Essex in April.
Detective inspector Paul Ridley said: “It has now been six months since the burglary and only one of the firearms has been recovered. Sadly, this has been severely rusted due to being exposed to the elements outdoors and its integrity destroyed”.
“We now have images of a vehicle that was parked near to the scene of the crime and appears to be carrying out reconnaissance in the area. In scenes reminiscent of a James Bond movie you can even see the flash of a camera from the occupant engaged in the surveillance”.
“I believe these individuals were involved in the crime, it was only a matter of minutes prior to the raid. The firearms which were stolen are very distinctive and will almost certainly be recognised by the public and anyone who is offered them for sale”, he added.
The police said the stolen items are unique. For example, the Magnum is the only one in the world ever made where the whole gun is finished in chrome. It has a six-and-a-half inch barrel and wood grips.
The Walther PPK was the last gun used by Roger Moore, who played James Bond in View to a Kill in a famous scene with Grace Jones who descends the Eiffel Tower on a parachute, the police added. (Courtesy: HT)