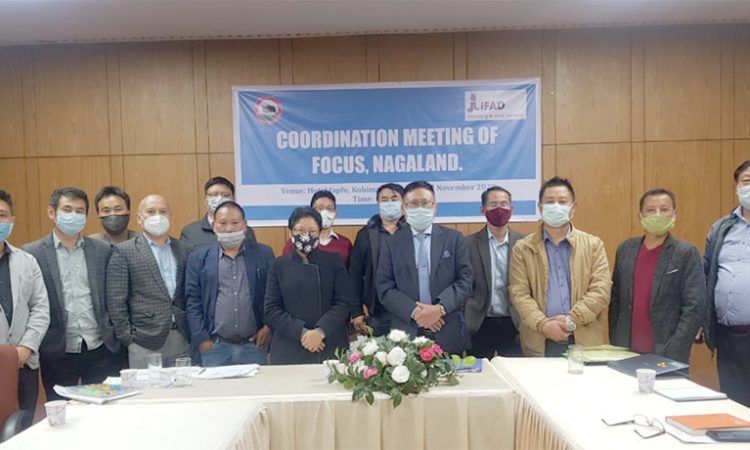 Dimapur, November 17: A coordination meeting of the officials of ‘Fostering Climate Resilient Upland Farming System in North East- Nagaland” (FOCUS- Nagaland) was held on November 17 at the conference hall, Hotel Japfu, Kohima under the chairmanship of Tainiu, State Project Director, FOCUS- IFAD, in presence of Y Kikheto Sema, IAS, Agriculture Production Commissioner to the Government of Nagaland & Mission Director FOCUS Nagaland.
With a brief welcome address, Chairperson mentioned that FOCUS project is one of the few externally Aided Project and is funded by IFAD, therefore, should be implemented with full seriousness & dedication. She encouraged the project team to work sincerely so as to ensure that the farmers are fully empowered for success of the project.
APC & MD FOCUS-IFAD deliberated that due to the Pandemic the Project could not make much headway during the 1st quarter of 2020-21, however, he asserted that “whether pandemic or not, Agriculture has to go on” and urged all team members to work tirelessly for the welfare of the farming community.
He stressed that food crisis cannot be ruled out as Nagaland mostly depends food from outside. Taking the advantage and opportunity of the present situation, he urged all team members to encourage the farming community to take up more farming activity and grow more food.
He said it was a unique and golden opportunity for all the PITs to work together as a team coming from all Agri and allied departments. He opined that the PITs are representing their department as they are among the best from their department and as such more is expected from all of them.
Further, he informed that there are reports of some Lead farmer (LF) and Community Animal Health Worker (CAHW) are not genuine farmers and some are Government Employees which is totally against the project norms. So he directed all PITs to verify the same in all project villages and replace immediately.
He also added that there are reports of funds meant for Farmer Interest Groups (FIGs) revolving fund has been utilized by few persons only in many villages without the knowledge of fellow FIG members, henceforth, he directed all PITs to take a note for remedial measures.
He also mentioned that despite of Pandemic, the FOCUS-IFAD project could provide seeds and planting materials to the farmers during the kharif season i.e., March-June. The project has also provided Rabi/winter seeds to all 647 project villages during Oct-Nov 2020. He opined that the farmers will have huge production by February- March 2021 and the project should assist the farmers in marketing of their produce.
He asked the PITs to take stock of the feedbacks/reviews of the farmers for the performance of the seeds and planting materials provided. He urged that the project should assist the farmers with seeds and any other components as per the market demand in a cluster manner and also stressed that henceforth, the project should provide seeds and planting materials to project villages well in advance, at least month prior of the planting/sowing time.
The interaction among members who attended the meeting was very fruitful where the district PIT incharges also highlighted their respective district project activities and plans.
APC & MD FOCUS thank all the members present for their valuable inputs during the meeting.
He appealed to all team members to put extra effort to achieve the project objectives and goals and devote more to serve for the people of the State when they are still in the service. (Page News Service)

Report on the Inter-State Movement of Stranded Persons released