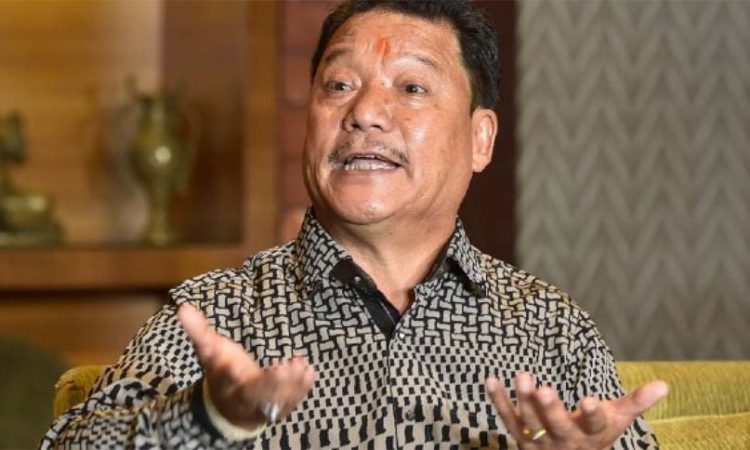 Darjeeling, April 11: Asserting that Saturday’s firing by the CISF in Cooch Behar, which claimed four lives, will be a “turning point” in Bengal polls, Bimal Gurung, the chief of one of the two GJM factions, claimed that the BJP is set to face the wrath of voters in the next four phases of elections, especially in the northern part of the state.

Gurung, in an interview with PTI, reaffirmed that “statehood is a dream nurtured by every Gorkha” living in the hills, while also noting that the TMC’s pitch for a “permanent political solution” and the overall development of Darjeeling and its adjoining areas sounds “very encouraging”.
Lashing out at the BJP for “deceiving the Gorkha jaati for 12 years with fake promises”, Gurung, who deserted the NDA and joined hands with the TMC in October last year, said he will teach the saffron camp a “lesson for life”, with Mamata Banerjee by his side.
The BJP had won the Darjeeling seat thrice since 2009 — with Jaswant Singh, SS Ahluwalia and incumbent Raju Bista respresenting the seat respectively over the past 12 years.
Condemning the Cooch Behar incident, Gurung said, “Killing of innocent people — be it by the state police or the central forces — is not acceptable. What happened on the polling day is nothing short of genocide; the BJP would feel the heat in North Bengal. The party would be wiped out from the region.”
Four persons were killed and as many injured when the CISF opened fire in Sitalkuchi area of Cooch Behar, triggering a political storm, with the central forces claiming that shots were fired in self-defence. The TMC, however, termed it a “cold-blooded” murder to intimidate voters.
“During the 2017 Gorkhaland agitation, many people were killed… The TMC subsequently faced the music in the 2019 general election when it lost all eight Lok Sabha seats in north Bengal. This time, the BJP is set to meet the same fate,” he asserted.
With 54 seats spread across eight districts, north Bengal has the wherewithal to be a game-changer this election, with the BJP striving hard to hold its fort in the region and the TMC seeking to recover its lost ground amid changing political equations.
The ruling camp in 2016 state polls had bagged 25 seats in north Bengal. But the subsequent general election in 2019 changed the course of the wind in favour of the BJP, which won seven of the eight Lok Sabha seats and stayed ahead in at least 35 assembly segments.
“The BJP managed to do well in north Bengal because we had supported the party in 2019. It bagged the Darjeeling seat thrice since 2009. Over the years, however, Gorkhas have realised that the saffron camp was only deceiving them with false promises. This election, it will get a befitting lesson,” Gurung, who holds sway over at least 15 assembly seats and 11 Gorkha communities, said.
Justifying his decision to change camp last year, he said, “We have full faith in Mamata Banerjee; she has promised to bring about a permanent political solution in the Hills.”
Stressing that the demand for Gorkhaland will always be the “most pertinent” issue for his outfit, Gurung, however, said that the overall development of the infrastructure in the region tops his agenda list for now.
“The mainstay of the Hill people is tea, timber and tourism. All three industries have been badly hit due to the COVID-19 pandemic. People now want jobs, development and a better standard of living,” he said.
Gurung had gone into hiding after the June 2017 clashes in Darjeeling. More than 120 cases were filed against him, including a few under the Unlawful Activities (Prevention) Act. The agitation led to a split in the GJM, with Binay Tamang, his deputy, emerging as the leader of one of the factions.
Making a dramatic appearance in Kolkata in October last year, he quit the BJP-led NDA and aligned with the TMC, underscoring that the saffron party has “failed to find a sustainable solution” for the Hills — which time and again had witnessed major unrest over demand for a separate state.
The Mamata Banerjee camp, which already enjoyed the support of the Tamang faction, welcomed Gurung in its fold, with her government apprently going slow on the criminal cases filed against him.
The ruling party has left three constituencies in north Bengal for its “friends from the hills”, and both the factions of the GJM are contesting the seats as independents.
Asked if his differences with Binay Tamang would have an impact on the electorate, he said, “I don’t have anything to prove anymore. Despite being in hiding, I have assured BJP’s victory in 2019. The people are with me.”
“If he (Tamang) is not loyal to the Gorkha people and me, how will he be loyal to Mamata Banerjee? People gave him an apt reply for his misdoings and he lost in by-polls in the Darjeeling assembly seat. The BJP, with my support, secured the seat,” he said.

The Gorkha leader, however, clarified that he did not rub shoulders with Mamata Banerjee out of fear or desperation to return to his homeland.
“Unlike what some people have claimed, I did not align with the TMC to get rid of the police cases. The cases that were filed against me are sub-judice,” he said.
Assembly elections in all eight districts of north Bengal are being held in five phases — between April 10 and April 29. (PTI)