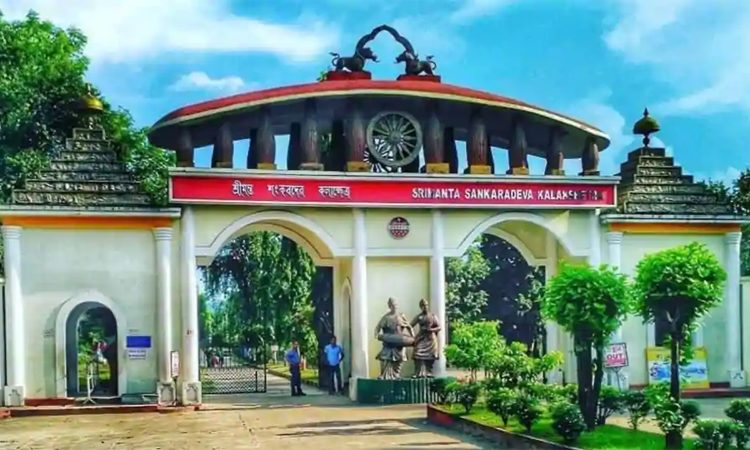 Guwahati, October 25: A controversy over an Assam Assembly proposal to set up a museum for ‘Char-Chapori’ areas has become the latest political flashpoint in the state with the opposition calling it the polarisation tactics of the ruling BJP before the state polls due early next year.
The Char-Chapori area denotes the riverine area inside the Srimanta Shankardeva Kalakshetra complex here.

The controversy broke out when Congress MLA Sherman Ali Ahmed used the word ‘Miya Museum’ in a Facebook post by him while referring to the museum.
The word ‘Miya’ in Assam is a slang which usually refers to the Bengali speaking Muslim population. The non- Bengali population in the state generally identify them as Bangladeshi immigrants.
BJP was quick to jump into the controversy with a number of its leaders saying no ‘Miya Museum’ will ever be allowed in Assam as the people living in such places are “illegal immigrants from Bangladesh”.
NEDA convenor and Assam minister Himanta Biswa Sarma said, “In my understanding, there is no separate identity and culture in Char Anchal of Assam as most of the people had migrated from Bangladesh.

“Obviously, in Srimanta Sankardeva Kalakhetra, which is the epitome of Assamese culture, we will not allow any distortion. Sorry MLA Sahab,” he tweeted.
Congress Lok Sabha MP Abdul Khaleque reacted saying ancestors of the people living in Char-Chapori areas had migrated from the erstwhile East Bengal, which was an integral part of undivided India.
“Kindly don’t distort history more just for the sake of getting power,” he tweeted.
Congress MP Prayut Bordoloi alleged on Wednesday that BJP has been trying to polarise the voters on the issue as it is afraid that it will taste defeat in the hands of the Congress-led Grand Alliance in the Assam assembly polls due early next year.
“The museum is a recommendation by a standing committee of the Assembly and majority of its members are from the BJP-led alliance. They unanimously suggested it. Sherman only reiterated as a member of the committee,” he told.

Ahmed’s party has, however, expressed dissatisfaction over his raising the issue at this time and said he should have practiced “restraint as a responsible politician”.
“Sherman should have been more restrained as a responsible politician. He was technically correct in his official letter, but mentioning the word ‘Miya Museum’ in his Facebook post was not in good taste at this time,” Bordoloi said.
The museum had been recommended by the Departmentally Related Standing Committee on Education (DRSCE), 2020-21 of Assam Assembly. The Committee has 15 members, including from BJP, allies AGP and BPF, Congress and AIDUF.
Ahmed had met the director of museums on October 18 and gave a letter requesting to implement the decision. He had mentioned ‘Miya Museum’ in English within brackets in a Facebook post written in Assamese on the same day while mentioning the museum which led to the controversy.

Rajya Sabha Member Ajit Kumar Bhuyan, who heads the regional party Anchalik Gana Morcha(AGM) said the Char-Chapori museum was recommended by the DRSC, whose majority members are from the BJP and its ruling coalition.
“Now the BJP is politicising the whole issue to garner political mileage,” said the senior journalist-turned- politician.
“What a shame!… Now it’s clear who wants the ‘Miya Museum’ in Srimanta Sankaradeva Kalakshetra premises. Will the members of the committee headed by Utpal Dutta disclose on what basis was a museum on Char-Chapori proposed in Kalakshetra premises?
“Will the MLAs from the ruling coalition answer why they supported the DRSC recommendation in the first place?” he said on Facebook.
Opposition AIUDF general secretary Haidor Hussain Bora alleged that it is an “unnecessary controversy” created by the BJP before the assembly polls and the Congress MLA directly helped the ruling party to garner mileage on the sensitive issue.