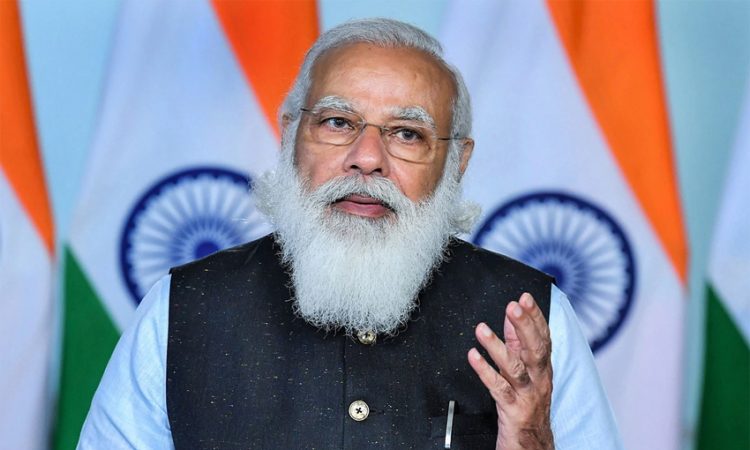 New Delhi, May 18: Prime Minister Narendra Modi said on Tuesday that continuous efforts are being made to ramp up COVID-19 vaccine supply in a big way, asserting that attempts are on to provide states 15-day advance schedule of the inoculation programme as it will allow them to prepare accordingly.

Interacting with state and district officials at a virtual meeting, he described them as “field commanders” in the fight against COVID-19 and said localised containment zones, aggressive testing and sharing correct and complete information with people are weapons to defeat it.
The meeting was attended by district magistrates from 46 districts across nine states.
People’s convenience increases when information like bed availability for the sick or the vaccine availability are easily available, Modi said and also asked officials to curb black-marketing and take strict action should be taken against those who do so.
Noting that coronavirus infections are decreasing in some states and increasing in some others, he emphasised the need to be more vigilant in the face of decreasing tally and underlined that he has always stressed that the fight is about saving every single life.
Asserting that vaccination is a strong way to fight COVID, Modi said myths about it have to be collectively rooted out.
The health ministry is streamlining the system and process of vaccination, he said, stressing the need to stop vaccine wastage.
Noting that every district has its own unique challenges, he told officials that they had a free hand to innovate to suit their local needs and asked them to share their feedback about any change in policy they may want without any inhibition.
Hailing officials, the prime minister said many of them worked despite being COVID positive while some lost their family members but they gave duty their foremost priority.
“You understand the challenges of your district much better. So when your district wins, the country wins. When your district beats Corona, the country defeats Corona,” a PMO statement said quoting Modi.
He asked officials to also take care of the ease of living of every citizen of their district, saying there is a need to stop infection and also ensure unhindered flow of essential supplies.
Work is being done rapidly to install oxygen plants in hospitals in every district of the country through “PM Cares Fund” and these plants have already started functioning in many hospitals, he said.

The statement said officials also informed the prime minister about the innovative steps that were undertaken to manage the recent surge of cases.
Modi asked them to compile the best practices and innovative steps so that these may be used in other districts of the country.
The meeting was also attended by the Home Minister, Defence Minister, Health Minister, chief ministers of various states, Member (Health) NITI Aayog, Health Secretary, Pharmaceutical Secretary, and other officers from PMO, ministries and departments of central government.
Modi is scheduled to interact with another bunch of officials on Thursday. (PTI)