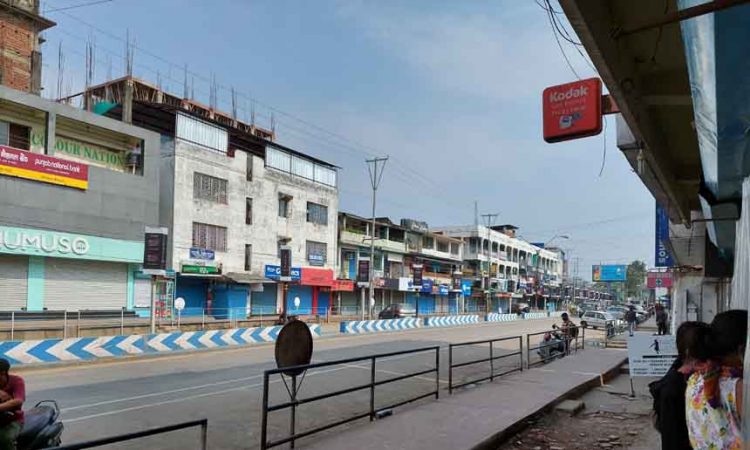 Shops closed in Dimapur on May 6 after it was declared a containment zone.

DIMAPUR, MAY 6: The new guidelines for containment zone in Dimapur district, which came into force Wednesday evening, is seen as a measure to contain the spread of the deadly Coronavirus in the district, but it needs to be implemented strictly.

On Thursday, all shops and business establishments, which were not in the exempted categories remained closed in every part of the town, however movement of people and vehicles in Dimapur town was normal. Those selling essential commodities closed down their businesses by 2 p.m. while medicine shops/pharmacies remained open till the evening.
Unlike last year, when the lockdown measures were stringently imposed in Dimapur, this year it seems very casual with no security personnel seen in most of the places in the town.
Police teams from respective police stations ~ East and West ~ came out in the street only around 2 p.m. to see that all shops are closed and those selling essential items on the footpaths were asked to close down.
Talking to Nagaland Page, a young man, who did not wish to be named, said that the idea of containment zone is good, but it has to be implemented in letter and spirit. Explaining what he meant by that, he said, “People are just moving out in groups and gathering at different places, which is not a good trend, if we want to contain the Coronavirus.”
He also said that some shops were closed from outside, but they were still doing their business as customers were present.
A medicine dealer said that they are opening their shops till evening as curfew will be imposed at 6 p.m.
He also said that there is no point opening the medicine shops beyond 6 p.m. as there will be no customers.
Meanwhile, night curfew was imposed at 6 p.m. in Dimapur forcing people to remain indoors. After 6 p.m. only few exempted vehicles were seen plying in the town.
When contacted, PRO Dimapur Police, Relo T Aye said that the curfew has been imposed strictly in Dimapur and hardly any movement of people were seen in the evening.

He, however, said that 6 shops under Sub-Urban Police Station were reprimanded for violating the containment zone guidelines.
Aye further said that apart from the Sub-Urban PS case, the situation has remained peaceful in Dimapur on Thursday. (Page News Service)