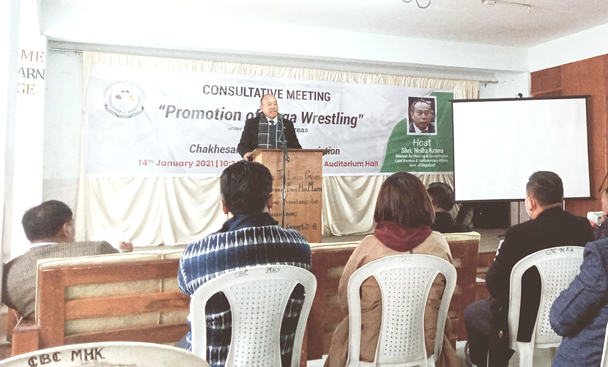 Chotisuh Sazo speaking at the consultative meeting on “promotion of Naga wrestling” in Kohima on January 14.

Kohima, January 14: The Chakhesang Wrestling Association (CWA) has successfully conducted a one day consultative meeting on “promotion of Naga wrestling” under Chakhesang areas at Kohima.

Addressing the meeting, MLA Dr. Chotisuh Sazo stressed on the need to strengthen and expand the horizon of Naga wrestling by conducting the tournament at the regional level as well.
He also urged the CWA to give due importance on freestyle wrestling for its huge scope in the international level.
“Wrestling is our traditional game and our identity” said CWA president Vekhozo.
He assured that the CWA shall do its best and commit “ourselves for the promotion and preservation of Naga wrestling in every possible way.”
Ex-minister Zachilhu Vadeo, Chakhesang Public Organization (CPO) president Mikha Kenye, Murohu Chotso, Avolie Kezo, Mosonyi Domeh, Shetsuyi Ruho, Kuhupoyo Puro, Chisazo Dawhuo and Hukhoneyi Soho also spoke at the meeting.
CWA general secretary Kuzhovesa Soho read out the resolutions adopted at the meeting.
Among others, the consultative meeting resolved to introduce wrestling in all the schools within Chakhesang area, to introduce wrestling in PDSA meet in weight category of 50-59, 60-69 and 70-79, to encourage belt wrestling, to give top priority to educationally qualified champion wrestlers in matter of job.
It also resolved to institute CWA Corpus Fund. In this, the CWA shall form Trustee Board.
The CWA shall take full responsibility of 18 selected wrestlers for at least 20 days before NWA main tournament.
The CWA shall host the forthcoming NWA Open Tournament 2021.
The meeting was chaired by CWA press secretary Kukhoto Venyo.
The consultative meeting was hosted by Neiba Kronu, minister for planning & coordination, land revenue and parliamentary affairs, Nagaland.
(Page News Service)