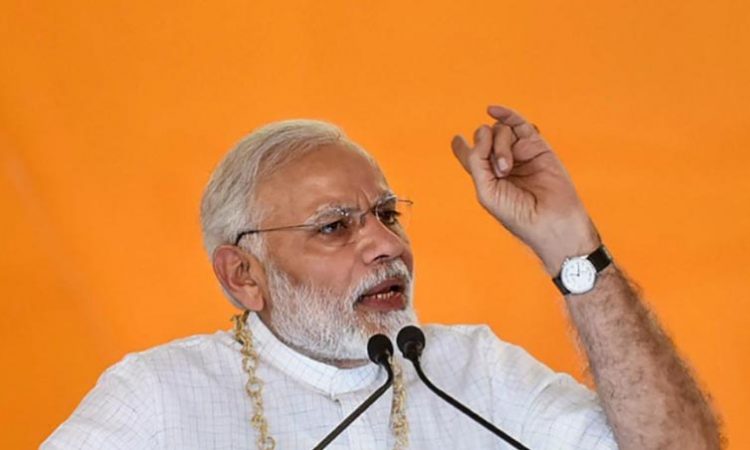 Theri, April 13: Prime Minister Narendra Modi on Saturday sought to corner the Congress on its showpiece poll promise of “Nyay,” and sought to know who would do justice for the victims of 1984 anti-Sikh riots, violence against Dalits, and the Bhopal gas tragedy under its regime.
The Prime Minister addressing a poll rally, a day after the campaign by Congress president Rahul Gandhi here, alleged the Congress and dishonesty were best friends but sometimes “by mistake,” they end up speaking the truth.
“Now they are saying “Ab Hoga Nyay” (justice will be done now) even if they did not intend, they have admitted that all they have done is “Anyay” or injustice for 60 long years,” (during the Congress rule), he said.
“I want to ask the Congress party who will do Nyay to the victims of 1984 Sikh riots ?
…Who will do Nyay to all the victims of anti Dalit (violence), who will do Nyay to the government of great M G Ramachandran ji, which was dismissed by the Congress just because one family did not like those leaders.”
…Who will do Nyay to the victims of the Bhopal gas tragedy, among the worst environmental disaster in India.”
The Prime Minister pointed out that such infamous incidents occurred during the Congress rule.
If Rahul Gandhi invoked Tamil pride and Dravidian legacy to target BJP’s Hindutva line, Modi today countered it by pointing to Tamil Nadu’s spiritualism, late AIADMK leaders M G Ramachandran and J Jayalalithaa and the welfare of Srilankan Tamils.
Modi said: “I pay homage to the great MGR and Jayalalithaa ji. India is proud of these two iconic leaders who lived and worked for the poor. Their social welfare schemes ensured lakhs of people are free from poverty.”
BJP stood with people on the Lord Ayyappa issue, he said and hailed the state’s spiritual ethos by citing the famous hill shrine of Lord Shiva (Sundaramahalinga Swamy Temple) on Sathuragiri hills in the region.
“Remember that for making a prosperous Tamil Nadu, this game of the DMK and Congress must end. We must continue working for the prosperity of our Srilankan Tamil brothers and we must end the dynasty rule of corrupt families,” he told the crowd.
The AIADMK has been accusing the DMK-Congress combine for not taking steps to halt the killings of Tamil civilians during the Srilankan civil war in 2009 while seeking to champion their cause and Modi’s remarks resonate it.
Without naming anyone, the Prime Minister said the nation was witness to “father becomes Finance Minister and son loots the country,” (during the UPA and seen as a reference to a senior leader from Tamil Nadu).
“Whenever they are in government they always loot, the Madhya Pradesh government has become their ATM, they are diverting money meant for poor and children for use in their election, this has become known as the “Tughlaq Road scam,” I am sure you all know which big Congress leader stays on Tughlaq Road in New Delhi.”
Tamil Nadu Chief Minister K Palaniswami lashed out at the DMK, asking it to clarify whom it would support in neighbouring Kerala, whether the Congress or the CPI(M).
In Tamil Nadu, DMK is leading the Secular Progressive Alliance, whose constituents include the Congress and the Left parties.
Modi launched a broadside against the Opposition saying the DMK, Congress and their ‘mahamilavati’ friends cannot accept strides India has made and therefore were “unhappy” with him.
The DMK and Congress though “sworn enemies” have joined hands, despite the national party having “humiliated” its southern ally in the past.
“Today India is rapidly making a mark in the world. The Congress, DMK and their mahamilavati friends cannot accept this. That is why they are unhappy with me,” he said at an election rally here.
The Prime Minister has been describing the opposition ‘mahagatbandhan’ (mega alliance) as ‘mahamilavati,’ meaning adulterated.
Taking pot shots at DMK President MK Stalin’s proposal naming Congress chief Rahul Gandhi as Prime Ministerial candidate, Modi said there were no takers for this among the opposition “because they are in line to be PM and dream of the post.”
“Some days ago, DMK supremo (Stalin) projected the Naamdar (dynast–Gandhi) as PM (candidate) but no one was ready to accept it, not even their mahamilavati friends, because they are in line to be PM and dream of the post,” he said, without naming anyone. Despite past “bitterness,” the Congress and DMK have joined hands, he said and recalled that the national party had “humiliated” the southern ally earlier, apparently referring to the dismissal of the DMK government in the past.
Even during the 2G spectrum allocation scam, centered around then Telecom Minster A Raja of DMK, the Dravidian party’s leaders were criticising the national party, which was leading the ruling UPA, he pointed out.
“In an attempt to mislead the people, all the corrupt have ganged up in an attempt to defeat Modi,” he added.
He said the DMK has to “resort to gimmicks” just to draw people to its rallies.
The Congress, the DMK and their other mahamilawati friends can never work for India’s development, he said.
“This land of Theni is known for brave people who served the nation, it is now up to you to decide how you will you deal with those who questioned the surgical and air strikes done by our brake armed forces,” he said.
The Indian Air Force (IAF) had carried out airstrikes on terror camps in Pakistan in February last.
“When it comes to national security there can be no compromise. I assure my fellow Indians that we leave no stone unturned in protecting India and destroying forces of terror.”
Referring to the capture of IAF pilot Abhinandan Varthaman by Pakistan army, he said, “When a brave Indian fighter pilot was captured in Pakistan, it was ensured that he is back home in record time and even then Congress was playing politics over national security and insulting our forces.” (PTI)