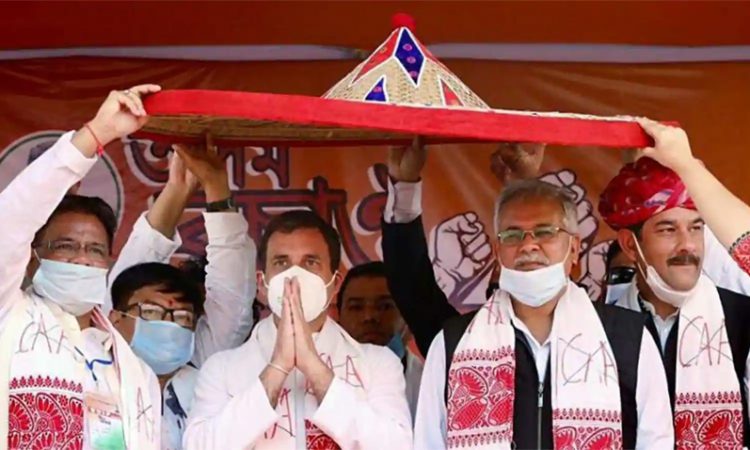 Sivasagar (Assam), February 14: Accusing the BJP and the RSS of “dividing” Assam, Congress leader Rahul Gandhi on Sunday said his party will protect every principle of the Assam Accord and will not let the Citizenship (Amendment) Act be implemented if voted to power in the upcoming assembly polls.

Sounding the Congress’ poll bugle in the state, Gandhi attacked the Modi government repeatedly alleging that it was working with an approach of ‘Hum do, Hamare do’ — a term he recently used while speaking in Lok Sabha to claim that the country is being run by only four people.
At his first public rally in Assam ahead of the assembly elections due in the next few months, Gandhi along with all the senior leaders on the dais wore a ‘Gamocha’ (Assamese scarf) on which symbolically the word CAA was crossed out, making it clear that Congress’ opposition to the controversial law will be a major poll plank.
Gandhi hailed the contribution of former Assam Chief Minister and senior Congress leader Tarun Gogoi, who passed away recently, calling him Assam’s soldier who united the state and spent his entire life protecting it.
In an apparent reference to former principal secretary to the Prime Minister Nripendra Misra being awarded the Padma Bhushan, the Congress leader, without naming anyone, said that in the same award list which had Tarun Gogoi, there was also the “name of a bureaucrat from PMO and I felt sad that the government of India had insulted Tarun Gogoi and this state”.
“On one hand there is the person who dedicated his entire life for the people, united Assam and protected the flag of India, while on the other hand is the bureaucrat from PMO who only hailed the PM. Tarun Gogoi was my Guru, and I did not feel good about it,” Gandhi said.
Stressing the importance of the Assam Accord, Gandhi said it was in a way the “protector” of Assam and the “tool of peace”.
“I want to tell you that I, along with all Congress leaders, will protect and defend the principles of the Assam Accord. We will not back off even an inch from that,” he asserted.
Gandhi said illegal immigration was an issue in Assam and exuded confidence that the people of the state have the capability to resolve the issue through dialogue.
Alleging that the BJP and the RSS are trying to divide the state, he said, “If Assam is divided, then Prime Minister Narendra Modi or your Chief Minister (Sarbanand Sonowal) will not be affected, but the people of Assam and the rest of India will be harmed.”
Underlining the importance of the state, Gandhi said it was a beautiful flower in India’s bouquet.
“Never forget that as much you need the country, the country needs you,” he said in his address to the gathering at the boarding field ground here.
If there will be violence in Assam and it is divided, then India will be harmed along with the state, he said adding that, “we will not allow this to happen”.
“We are wearing this ‘gamocha’ which has CAA written on it which is crossed out which means that no matter what happens, CAA will not be allowed (to be implemented by us)… listen ‘hum do humare do’, we will never allow CAA (to be implemented),” Gandhi said.
“I have come here to tell you, all the Congress leaders are standing here that no power in the world can break Assam. The Congress and the people of Assam will teach a lesson to those who try to touch the Assam Accord and spread hatred,” he asserted.
The Assam Accord provides for the detection and deportation of all illegal immigrants, who have entered the country after 1971 and living in the state, irrespective of their religion.
Under the CAA, members of Hindu, Sikh, Buddhist, Jain, Parsi and Christian communities who have come from Pakistan, Bangladesh and Afghanistan till December 31, 2014 after facing religious persecution there will not be treated as illegal immigrants and will be given Indian citizenship.
Anti-CAA protesters in the state say that the law violates the provisions of the Assam Accord.
In his address, Gandhi said the state needs its “own chief minister” who will listen to the voice of the people and not the one “who listens only to Nagpur and Delhi”.
“Remote control can operate a TV but it should not operate a state. The current CM listens to Nagpur and Delhi. If Assam gets a CM like this again, it will not benefit the people. The youths need a CM who will give jobs to them,” he said.
Taking a dig at the Modi government and the state dispensation using an old family planning slogan, Gandhi alleged India is being run by four people — “Hum do, humare do’ baaki sab mar lo.”
“For Assam, I have an extension, ‘hum do, humare do, aur humare do aur, jo Assam ko chala rahe hain. Aur Assam se sab kuch lo’, this is the reality,” he said.
Gandhi alleged that natural resources and PSUs in the state were being “sold off” to two businessmen of the country.
He also accused the Modi government of “looting” public money during the COVID-19 pandemic and waiving huge amounts of loans of his “businessmen friends”.
During his address, Gandhi also held out Rs 167 and showed it to the people at the rally, to stress that the tea workers get only that amount, “while Gujarati business people get tea gardens”.
“That is why they (the BJP) want to divide Assam because they know that if they have to steal from Assam then they have to divide the state,” he said.
The Congress will add almost Rs 200 and give tea workers Rs 365 daily, he said.
“Now you will ask where will the additional money come from, I will tell you — from Gujarati business people,” he said.

Referring to the ongoing issue of the farmers protesting the three agriculture laws, he claimed that the prime minister gave a speech in Lok Sabha last week but did not say anything about farmers and there was also nothing for them in the budget.
He alleged that demonetisation and GST destroyed the small and medium businesses which, he said, were the spine for employment generation.
“Now they have got three farm bills through which they will destroy the whole agriculture system and India’s biggest business worth Rs 80 lakh crore, they are going to hand over to two people,” he alleged.
The Congress is a party for the weak, poor, farmers, and small and medium business, Gandhi said.
“We are a people’s party and wherever we come to power you will see two-three things — we will finish hate being spread, we will protect everyone and we will provide jobs,” he added. (PTI)