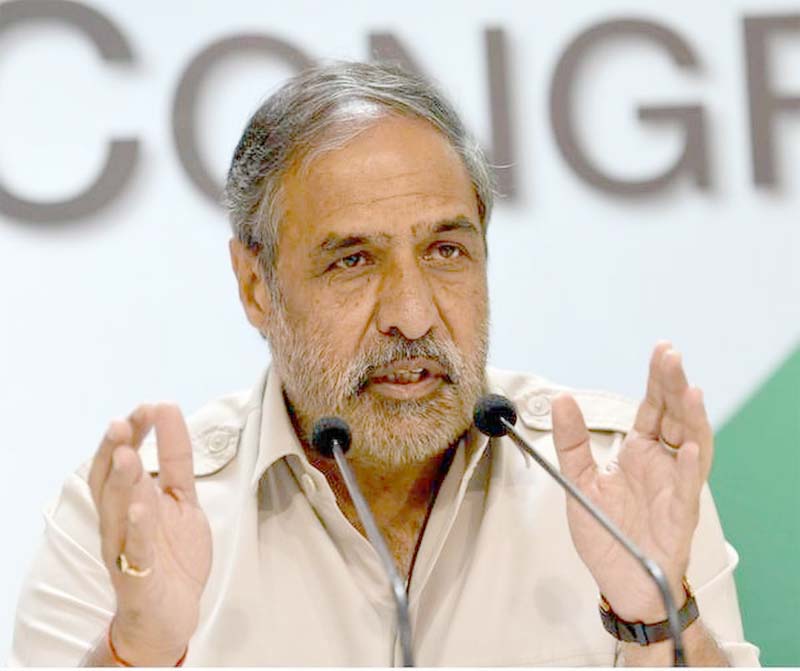 NEW DELHI, December 16: The Congress on Sunday urged the Supreme Court to recall its Rafale judgment and issue notices to the central government for contempt of court and perjury, alleging the Centre had provided false information to the apex court.
Addressing a press conference at the party headquarters here, senior Congress leader Anand Sharma alleged that the government was guilty of committing breach of privilege of both houses of Parliament by claiming that the CAG report on Rafale aircraft pricing had been presented to the Public Accounts Committee of Parliament.
The Congress leader also took a broad swipe at Prime Minister Narendra Modi and the BJP, saying “they should seek penance and take a dip in the holy Ganges instead”.
“We demand that the Supreme Court immediately recall that judgment which is void. It would be in the interest of the dignity of the Supreme Court to do so, because this entire episode has dented the dignity of the highest court which cannot be allowed,” he told reporters, adding that what has happened is unacceptable.
“It is important that the Supreme Court issues a notice of perjury to the government and the concerned officials and the law officers. The Supreme Court must also issue contempt notice to the government,” he said.
The Supreme Court on Friday dismissed the pleas, saying there was no occasion to “really doubt the decision-making process” warranting setting aside of the defence contract for purchase of 36 Rafale fighter jets.
In its judgment, the court has made a reference to a CAG report on the aircraft deal. It has said the CAG report was examined by the Public Accounts Committee of Parliament.
But the Congress has insisted that the government presented “wrong facts” before the court during the hearing of pleas challenging the aircraft deal with France, which gave the government relief in the cases.
On Saturday, the Centre moved the Supreme Court seeking correction in the judgment, saying “misinterpretation” of its note has “resulted in a controversy in the public domain”.
The Centre made it clear that it did not say the CAG report was examined by the PAC or a redacted portion was placed before Parliament. It clarified the note had said the government “has already shared” the price details with CAG, written in past tense and “is factually correct”.
On Sunday, Sharma said there is no ground for the apex court to even consider the government’s petition seeking to correct the judgment. He said the government’s conduct and its credentials are certainly “under dark shadow” as it has in the process of “misleading” the court committed “a grave act of the breach of privilege of the Parliament which is Sovereign”.
“The Government, therefore, is guilty of breaching the privileges of all the members of Parliament by having claimed that the CAG has examined and given its report which has been further scrutinized by the PAC, which it has given … all of this is false,” he said.
The Congress leader said two processes must follow now and “we have urged the Supreme Court that it has become imperative without any delay to recall and issue the notices to the government. The Parliament is in session and the government surely is in the dock for having committed a grave breach of privilege of not only the PAC, but both the houses of the Indian Parliament.”
He said the Congress has been of this consistent view that the Supreme Court is not the right forum to investigate the issues related to the Rafale deal, to probe, which it has not done and the court itself has said so.
“The Supreme Court judgment is not only self contradictory, but we are shocked to find factual inaccuracies and the aversions which were made, submissions of the government were false,” he said.
Sharma said the judgment is based on the premise that the government had shared the pricing details with the CAG, which submitted the report through the Public Accounts Committee and portions of that have been shared with Parliament and thus in public domain.
“There has been no CAG report,” he said, adding Congress leaders had met the CAG a few months ago demanding a “forensic audit” of the global tender for the Rafale aircraft deal.
The former union minister said it is mandatory for the CAG to give the report to Parliament, but no such report has been received by Parliament.
He said what has happened is “unprecedented” and the government’s curative petition filed on Saturday “adds insult to the injury caused”. (PTI)