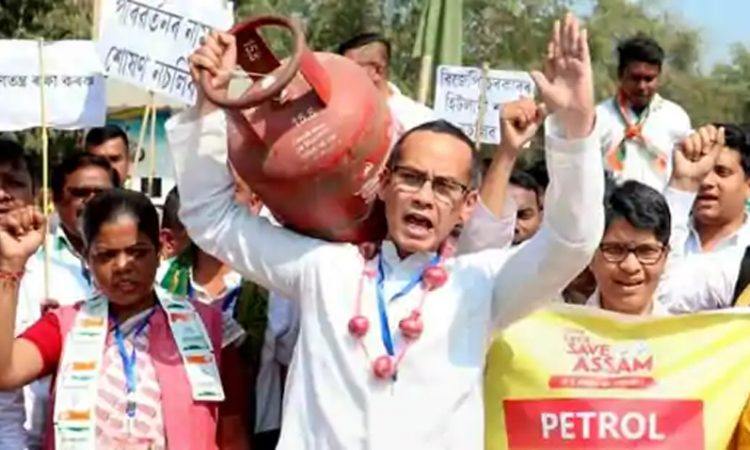 Congress MP Gaurav Gogoi along with other senior party leaders stage a protest against the fuel price hike, in Golaghat.(Courtesy: PTI)

Guwahati, February 21: The Congress on Sunday carried out protests against rising fuel prices in nearly two dozen petrol depots in several districts of Assam and slammed the BJP-led central governments at the Centre and the state. Party workers marched in a procession to the petrol depots against the steep rise in prices of petroleum products.

Former union minister and AICC general secretary Mukul Wasnik, All India Mahila Congress president Sushmita Dev, Assam Congress chief Ripun Bora and other leaders like Pradyut Bordoloi, Gaurav Gogoi, Debabrata Saikia and Rakibul Hussain led the protests in the districts.
The leaders and hundreds of Congress workers held placards and shouted slogans against Prime Minister Narendra Modi, Chief Minister Sarbananda Sonowal and state Finance Minister Himanta Biswa Sarma for failing to contain the prices.
The Congress has been demanding that tax on petrol and diesel be reduced and the common people given relief in prices of fuel.
“The so-called ‘double engine’ BJP governments are fooling the people of Assam. Reducing Rs 5 on petrol-diesel just before elections in Assam is a hoax,” said Dev while addressing the protest in Hojai.
The assembly election in the state is due in April- May.
Protsts took place in Cachar, Dibrugarh, East Karbi Anglong, Biswanath, South Salmara, Karimganj, Majuli, Nalbari, Darrang, Hailakandi, Sonitpur, Barpeta, Guwahati, Nagaon, Golaghat, Jorhat and Lakhimpur districts.
“The base price of petrol is Rs 33.46 per litre and that of diesel is Rs 31.82 per litre. However, the common man is forced to pay Rs 87 per litre for petrol and Rs 82 per litre for diesel in Assam. The BJP is simply looting the people in the name of taxes,” Bora said at Hojai.
Bordoloi, a Lok Sabha MP, questioned the BJP-led government on what basis does it decide on the prices of petroleum products every day and the explanation for “subjecting people of Assam to this cruelty”.
“BJP Govt is mercilessly looting the public with hiked fuel prices, especially during a raging pandemic! I want to ask why is this hike in petrol and diesel prices when international crude oil prices are low?” said Gogoi.
Petrol price has already surged past the Rs 100-mark in some places in Rajasthan and Madhya Pradesh, which levy the highest VAT on the fuel. (PTI)