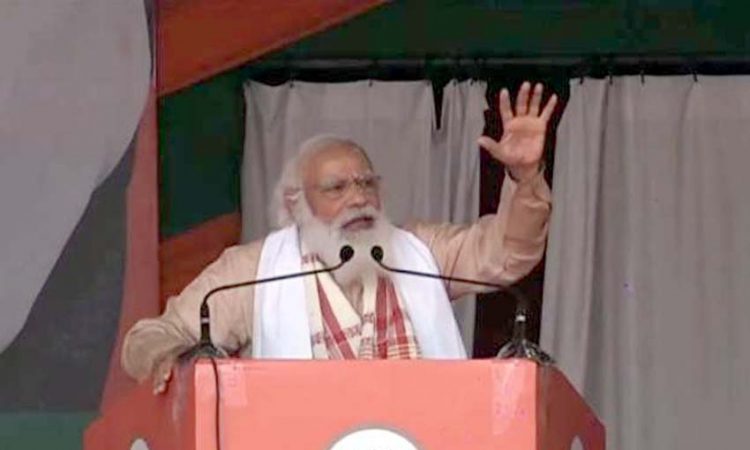 Karimganj, March 18: Hitting out at the Congress, Prime Minister Narendra Modi on Thursday said the grand old party can go to any extent to mislead people and garner votes.

Addressing his first election rally in Assam after the announcement of poll dates, the prime minister said the Congress is moving around with ‘tala-chabi’ (poll symbol of AIUDF) in the state, even as some of its workers have always been opposed to the idea.
“The Congress is confused… In Bengal, it has embraced the Left. In Kerala, it is engaged in a wrestle with the Left… Can a party, which has no stable thought process, provide a stable government in Assam and ensure the welfare of its people?” he stated.
In Assam, the grand old party’s hand (Congress symbol) is now “holding the lock and key”, the PM said.
“The Congress has become so weak that it can align with anybody and mislead people to get votes. The party did not even hesitate to betray its workers, who have, for decades, opposed the AIUDF,” he noted.
Taking a dig at the poll promises made by the Congress, Modi said those were mere announcements, and the party’s leaders, despite trying to highlight the vows as manifesto points, have no intention of fulfilling them.
“A lot of hard work goes into the preparation of a poll manifesto. People have to be consulted for their views, discussions have to be held, and the present status of the treasury has to be taken into consideration. For the Congress, however, manifesto is all about lies,” he claimed.
Modi further said that the Congress, which has “lost touch with ground realities”, is misguiding people across the entire country, but voters understand their ploy and fooling them won’t be easy, he said.
“On one hand, you have BJP policies, its positive intent, and on the other, you have the Congress, which has no ideology. It is the BJP which has always worked for the nation’s interests. The Congress had for decades neglected the northeast region,” he contended.
The PM accused the grand old party of creating “disconnect” between people and places.
“The BJP, however, has done everything to connect people physically, emotionally and culturally. Our government has established connect between Barak-Brahmaputra plains and the Hills. It has ensured all-round development of the state, empowered all through its government schemes.
“The BJP’s double-engine government has strengthened air, rail and road infrastructure in the region, connecting the place with the rest of the country. It has improved healthcare facilities, provided aid to farmers, housing support to women,” Modi asserted.
Talking about the measures initiated by the BJP dispensation for the tea garden labourers of the state, he said the Centre has allocated Rs 1,000 crore as special package in this year’s budget, and taken steps to ensure healthcare facilities, particularly for the women workers, and educational amenities for their children.
The PM, who began his speech by invoking Netaji Subhas Chandra Bose and Ahom General Lachit Barphukan, further said that it was time to pay homage to the national builders.

Modi had, on an earlier occasion, wrongly described Ahom kingdom commander Lachit Barphukan, who had warded off Mughal invasion, as a freedom fighter, drawing wide-spread criticism from opposition parties.
“The state has the blessing of brave warrior Lachit Barphukan, who had saved Assam from invaders. It is time to pay our homage to nation builders like him and Netaji,” he added. (PTI)