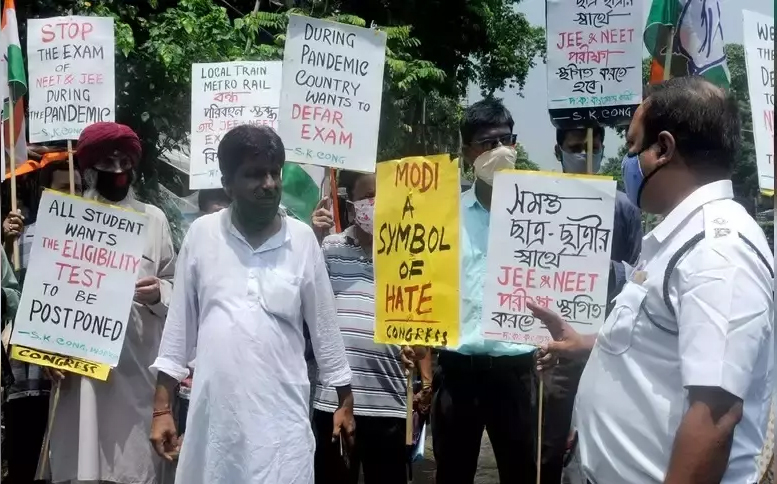 New Delhi, August 28: The Congress on Friday launched a campaign against the government’s decision to hold NEET and JEE exams during the coronavirus pandemic, with former party chief Rahul Gandhi urging people to speak up for the safety of students.
The Congress and various opposition parties have demanded that NEET and JEE examinations be deferred due to the COVID-19 pandemic and floods in parts of the country, even as the Union government has made it clear that they will be held as per schedule with due precautions.
Gandhi tweeted his appeal as part of the party’s campaign under which it is holding countrywide protests on Friday to oppose the government’s decision to hold NEET, JEE exams.
“Unite your voice with lakhs of suffering students. #SpeakUpFor StudentSafety…Let’s make the government listen to the students,” he said on Twitter.
“Raise your voice with lakhs of worried students…Let us demand from the government to listen to the students,” he tweeted, tagging a video which emphasised the party’s stand on the issue that the government must take into consideration the problems being faced by the students.
The Congress, on its official Twitter handle, said the government must be fair to all citizens when taking decisions.
“We urge the BJP government to consider the implications of holding the JEE & NEET exams right now. Listen to the students and then take a decision,” the party said.
It also posted videos of several senior Congress leaders voicing their opposition against holding of the exams.
Congress general secretary organisation, K C Venugopal, had said on Wednesday that various state units of the Congress will be holding protests on Friday in front of central government offices at state and district headquarters.
While the NEET is slated to be held on September 13, engineering entrance exam JEE-Mains is scheduled between September 1-6. (PTI)