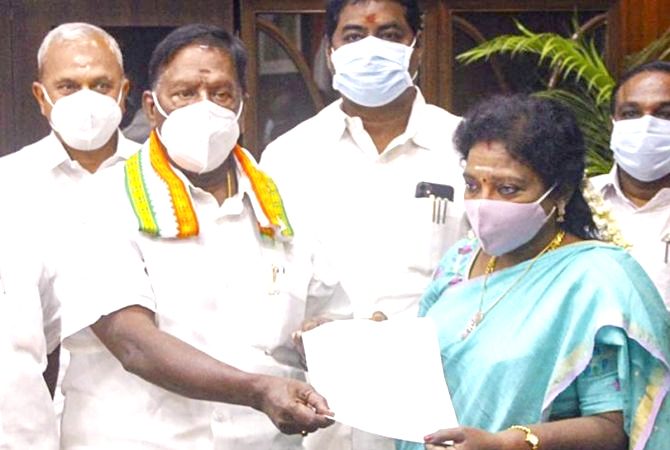 Puducherry Chief Minister V Narayanasamy hands over his resignation letter to Lt Governor Dr Tamilisai Soundararajan after he failed to prove his majority in the assembly, in Puducherry, on Monday. Photograph: PTI Photo

Puducherry, February 22: The Congress government in Puducherry fell on Monday after Chief Minister V Narayanasamy resigned ahead of the confidence vote in the Assembly with the coalition ministry reduced to a minority due to a spate of resignations of party MLAs and a DMK legislator recently.

Narayanasamy met Lt Governor Tamilisai Soundararajan and submitted the resignation of his four-member cabinet, ahead of the Assembly elections due in April-May.
With the exit of the Congress government here, Punjab, Rajasthan and Chhattisgarh are the only three states in the country ruled by the party on its own.
Holding that Speaker V P Sivakolundhu did not put to vote the motion moved by him for a confidence vote, the Congress veteran said the former’s ruling that it stood defeated was “incorrect and invalid.”
Legal experts would be consulted on the matter, he said while dubbing the turn of events, surrounding the issue of voting rights of nominated members, BJP in this case, as a “murder of democracy.”
DMK chief M K Stalin, whose party is an ally of the Congress here, also slammed the opposition for the fall of the government and hailed Narayanasamy for “upholding democracy.”
Earlier, Narayanasamy met Soundararajan and submitted the resignation of his cabinet, even as the ruling side’s strength slid to 11 as against the opposition’s 14.
The opposition, led by NR Congress chief and Leader of Opposition N Rangasamy, said it has no plans to stake claim to form government as of now and that discussions would be held.
Soundararajan had last week summoned the assembly’s one day special session for today, mandating its agenda should be confined only to trust vote after the opposition petitioned her saying the government had been reduced to a minority due to the resignations.
A fresh bout of resignations on Sunday took the tally in the last few days to three and the cumulative since last month to six.
Subsequently, the party position in the assembly was: Congress (nine, including Speaker), DMK two, All-India NR Congress seven, AIADMK four, BJP three (all nominated with voting rights) and one independent who has supported the government. There are seven vacancies.
Those who had resigned included former ministers A Namassivayam (now in BJP) and Malladi Krishna Rao.
On Monday, after mounting an attack on the Narendra Modi-led Centre and former Lt governor Kiran Bedi with whom he had frequent run-ins on administrative matters, Narayanasamy led his colleagues out of the Assembly after a debate over the rights of nominated members to vote during the floor test.
Subsequently, Sivakolundhu announced that the motion for confidence vote moved by the chief minister in the morning was defeated, even as it was not taken up for either voice vote or division.
“Our view that only the elected members can vote in the House was not accepted by the Speaker. So we walked out of the assembly and met the Lt Governor and gave resignation letter of my cabinet,” Narayanasamy, accompanied by his ministers, Congress and DMK MLAs besides the independent legislator who had earlier supported the government, said.
It was now up to Soundararajan to decide on their resignation, he added.
Training his guns against the Speaker, Narayanasamy wondered why he had not put the motion for confidence to vote, while insisting the nominated members had no voting rights.
Government whip R K R Anandaraman raised the voting rights issue with the Speaker but he did not reply, he added.
“And since he did not accept it, I said we are walking out and going to meet the LG and submit resignation. But the Speaker after the walkout said the motion failed. He did not follow the rules… there should have been voting by Speaker even if we had walked out,” he said.
The Speaker should have considered opposition votes against the motion and then declare it has been defeated, he said.
This was ‘incorrect’ under the procedure and the speaker should have put the motion to voting even if there was an abstention either by Treasury or opposition benches and then he can say whether it was carried or rejected.
“This procedure he didn’t follow. Therefore the speaker’s ruling is incorrect and invalid,” Narayanasamy said.
Since it was a legal issue, experts will be consulted, he added.
Two of the nominated members did not even secure deposit in the past election, one getting 165 votes, but “using the three people the BJP government at the Centre, AINRC and AIADMK wanted to dislodge our government.”
“In that they succeeded (today) by using the voting power given to these three nominated MLAs. This is murder of democracy,” Narayanasamy said, adding, the people of Puducherry and the country “will teach them a lesson.”
Meanwhile, Stalin, in a statement, slammed the “murder of democracy” and blamed the BJP for “toppling the government.”
TNCC President K S Alagiri said people will teach a lesson to BJP in the coming elections in the union territory (UT) for its “anti-people” activities.
Earlier, after moving the confidence motion, Narayanasamy blamed both the NDA government at the Centre and the opposition bloc in the UT for “being responsible for stalling implementation of welfare schemes proposed by the elected government”.
Lashing out at Bedi, he alleged she “conspired” against the government on matters including revenue generation.
“Those rejected by people conspired to topple our government but we stayed firm due to our resilience.”
He alleged the NDA “distinguished itself by toppling governments of the opposition parties as was seen in Arunachal Pradesh…”
“Now they had played their role in toppling the Congress-led alliance government in Puducherry,” he said and charged the Centre with committing “mayhem of democracy with the support of the opposition parties in Puducherry.” (PTI)