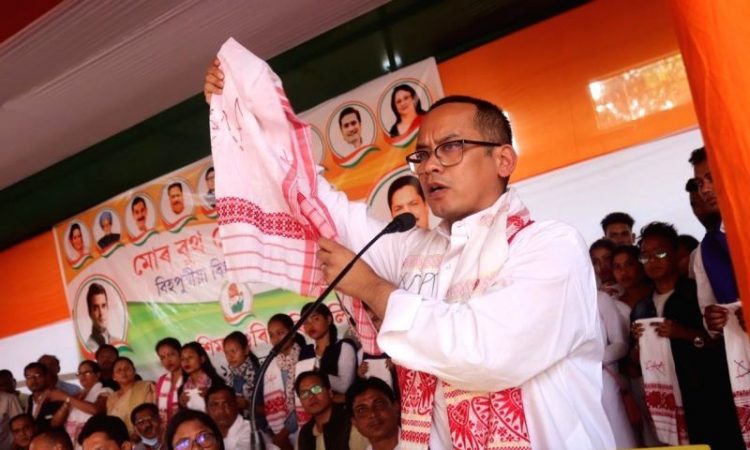 Guwahati, February 19: The family of Sam Stafford, who was the first person to be killed during the protests against anti-Citizenship Amendment Act(CAA) here, Friday handed the first ‘gamocha’ to the Congress for display at the party’s ‘Martyrs’ Memorial’.

The Congress has launched a drive to collect 50 lakh ‘gamochas’, the traditional red and white woven cloth offered as a mark of respect in Assam, with anti-CAA messages which will be displayed at the memorial to be set up in the city if the party comes to power in the coming state election.
Sam’s mother, Mamoni Stafford handed over the ‘gamocha’ to senior Congress leader Rakibul Hussain and demanded justice for her 17-year old son who succumbed to bullet injuries sustained in alleged police firing during the anti-CAA protest that rocked Assam in December 2019.
My son was neither a terrorist nor a hooligan. Who gave them (the police) the right to kill my innocent son? I demand justice for him,” she said.
Five persons were killed in police firing during the violent protests which had raged across the state against the Act that seeks to grant Indian citizenship to non-Muslim religious minorities from Bangladesh, Pakistan and Afghanistan.
Educationist and former Rashtriya Swayamsewak Sangh (RSS) activist Mukul Chandra Saikia demanded a complete roll back of the CAA and handed over a ‘gamocha’ to Hussain with his comments and signature on it.
Social activists Rajiv Handique and Bijit Handique handed over their signed ‘gamochas’ with anti-CAA messages to Congress Legislature Party Leader Debabrata Saikia in Tinsukia.
Social workers Sushanta Dutta and Binita Hore, both Hindu Bengalis, did the same.
I am a Bengali Hindu and I do not want CAA to be implemented, Dutta wrote on his ‘gamocha’.
Congress spokesperson Bobbeeta Sharma said that the party is getting “massive support” from the people for its drive as women, college students, entrepreneurs, senior citizens, private sector employees are handing over signed ‘gamochas’ to its leaders and workers.
The state party unit took up the project to keep its anti-CAA stand at the forefront of its election campaign in the state.
Meanwhile, six senior Congress leaders have posed six questions to the BJP on the CAA and asked the saffron party to clarify its stand on them.
Assam Pradesh Congress President Ripun Bora asked the BJP to tell if CAA benefits Assam or not.
The Congress Campaign Committee Chairman, Pradyut Bordoloi asked Union Home Minister Amit Shah to clarify whether CAA will be implemented across the country or only in Bengal as the saffron party is aggressively campaigning for the Act in the run up to that state’s assembly elections, which is due in April-May.
Gaurav Gogoi, the chairman of Congress Manifesto Committee asked the bjp whether it thinks that CAA is in favour of the Assamese people”.
Why is the BJP pretending that CAA will not be implemented in Assam when its rules were framed in July? asked Congress Legislature Party Leader Debabrata Saikia.
Rakibul Hussain asked Does the Assam BJP think that its stand on CAA is in conformity with its pitch for Jati (Community) Mati (Land) and Bheti (Base).

‘Jati, Mati, Bheti’ was the BJP’s slogan in Assam for the 2019 polls.
Congress Lok Sabha MP Abdul Khaleque asked, Does BJP think that CAA will not violate provisions of the Assam Accord?”.
The Congress took up the memorial project two days after party leader Rahul Gandhi’s February 14 rally at Sivsagar where he had kickstarted the party’s poll campaign.
He had said the Congress was for the Assam Accord and had given the no-CAA call.
Elections to the 126-member Assam assembly is likely to be held in March-April this year. (PTI)