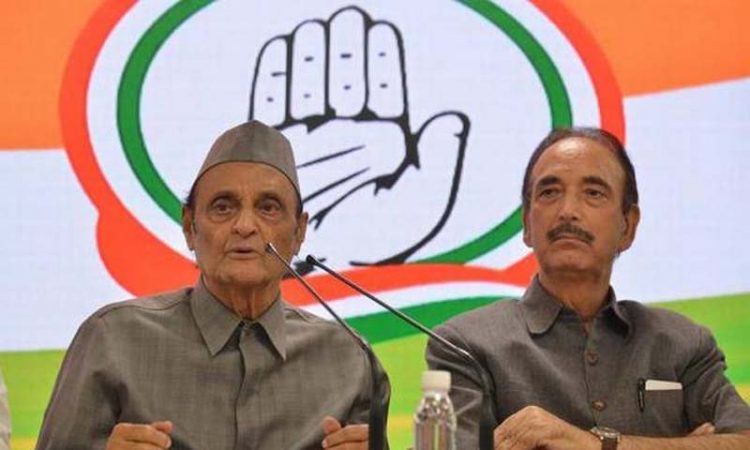 New Delhi, August 3: Condemning the government’s decision to curtail the Amarnath Yatra, the Congress on Saturday demanded that Prime Minister Narendra Modi make a statement in Parliament on the current situation in Jammu and Kashmir and expressed apprehensions about a “misadventure” by the Union Home Ministry.
The Congress sought a reply from the prime minister, a day after the Jammu and Kashmir government asked Amarnath yatris and tourists to cut short their stay in the Valley and return as soon as possible in the wake of intelligence inputs of “specific terror threats” to the pilgrimage.
Addressing a press conference at the party office here, senior party leader and former home minister P Chidambaram cautioned the Union Home Ministry against any misadventure in the state related to constitutional provisions such as Articles 35A and 370.
Referring to the advisory, senior Congress leader and former chief minister of the state Ghulam Nabi Azad said the Amarnath yatra has never been curtailed in the history of the country, not even in 2000 when the biggest attack on pilgrims left over 30 people dead.
“This is unprecedented,” Azad said.
Alleging that the BJP government at the Centre is “spoiling the image” of Jammu and Kashmir in front of the country, he said it is trying to show that outsiders in the state are not safe, even though the local people there are completely standing with the tourists and Amarnath pilgrims.
He also accused the BJP of doing politics over the issue.
“Parliament is in session. Prime Minister should give statement in both houses of Parliament. It is his duty,” said Azad, who was flanked by Chidambaram and senior party leaders Karan Singh, Anand Sharma and Ambika Soni.
Replying to an question on whether the Home Ministry could be working on scrapping Article 35A, Chidambaram said,”I don’t wish to anticipate what misadventure this government is planning to do in Kashmir. Most of the constitutional issues involving Kashmir are pending in the Supreme Court. It’s clear to me, they are planning a misadventure in Kashmir and I warn them not to do so.”
Senior party leader Karan Singh said everybody is in a state of shock after the government’s advisory curtailing the Amarnath Yatra.
An atmosphere of fear and apprehension has gripped the state, he said.
Azad also asserted that the situation in the Valley is “worrying” and questioned the deployment of the additional forces in the state which he said is a “matter of concern”. (PTI)