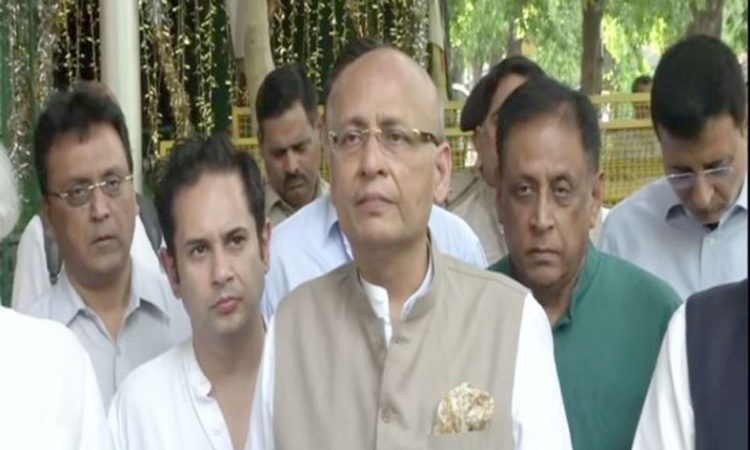 New Delhi, April 29: A Congress delegation, led by Abhishek Manu Singhvi, met Election Commission officials here on Monday, demanding a ban on Prime Minister Narendra Modi from campaigning for 48 to 72 hours for allegedly violating the Model Code of Conduct (MCC) several times.
“Today, we raised three important issues with the EC. The main concern was the Prime Minister’s speeches on armed forces, where he has been dragging the services into politics. This is unconstitutional. The Prime Minister is asking for votes in exchange for the 40 brave jawans who died in Pulwama and the airstrike by the IAF in Balakot,” Singhvi told reporters here after the meeting with EC officials.
“He (Modi) also gave an interview to a channel where he was saying that the forces went deep inside Pakistan at his behest to kill terrorists and, therefore, people should vote for BJP,” he said.
“We also filed a complaint against Narendra Modi and BJP president Amit Shah over the same issue. But the EC did not take any action against them in the last one month. We have raised this matter with the EC and have demanded a ban on the Prime Minister from campaigning for 48 to 72 hours. This should be done like how Uttar Pradesh Chief Minister Yogi Adityanath and Mayawati were banned from campaigning,” he added.
Singhvi alleged that during polling in Tripura West Lok Sabha constituency, there was booth capturing and violence backed by the BJP government in the state. He demanded that the EC should cancel the election in the parliamentary seat and hold fresh polls there.
“In the election that was held on April 11 in Tripura West, there was booth capturing and more than 500 CCTV cameras were destroyed. We request the EC to immediately countermand the election held there and hold fresh polls,” the Congress leader said.
Singhvi said that the EC should discharge its constitutional duties without any hesitation.
Meanwhile, party spokesperson Randeep Singh Surjewala raked up the allegation that Modi was busy in “shooting” at Jim Corbett National Park when the Pulwama attack took place.
“When the entire nation was mourning in the wake of the Pulwama attack, our Prime Minister was busy in shooting at Jim Corbett. Instead of immediately chairing a Cabinet meeting, he was chairing the shooting in Jim Corbett. The Prime Minister left his responsibility and was honing his acting skills,” he said. (ANI)