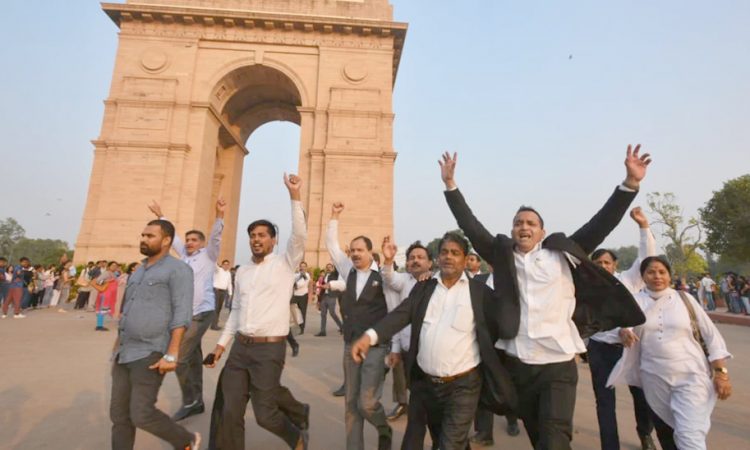 New Delhi, November 4: Monday’s strike by lawyers to protest Saturday’ clash with the police at Tis Hazari Courts turned violent with at least four attacks on commuters, journalists, and police personnel outside Delhi’s three districts courts allegedly by members of the legal fraternity, police said.
All the four incidents were captured on mobile phones and later circulated on social media. At many places outside the courts, roads were blocked by the lawyers who were protesting the attack on their colleagues on Saturday.
A police officer who did not wish to be named said they were waiting for those who were attacked to lodge complaints following which action could be taken.
In one of the videos, a policeman in uniform and riding a police bike is seen being assaulted a man wearing white shirt and black trousers. The video is said to be of Saket Court Complex in south Delhi and the person who shot the video uploaded it on social media. In another video which is said to be shot outside the same court complex, another man is seen being assaulted by two-three men. The man’s clothes were also torn.
An auto-rickshaw driver was assaulted allegedly by some agitating lawyers after they caught him making videos of the protest on his mobile phone. The auto driver suffered injuries to his hand.
The third video which is apparently shot outside the Karkardooma court in east Delhi, a motorcyclist is seen being assaulted allegedly by a group of protesting lawyers. The biker is seen running away, leaving his bike on the road.
Hindustan Times independently cannot verify the authenticity of the videos or confirm the places where they were shot.
Earlier in the day, some lawyers allegedly misbehaved with two journalists, including a woman reporter and snatched their cellphones when they were reporting the strike and making videos of the protesting lawyers.
Journalists were reportedly also manhandled at Tis Hazari Courts which was scene of a violent clash between lawyers and the police on Saturday following an altercation an advocate had with some policemen over parking his car outside the court’s lock-up area. The lawyers have alleged that police opened fire at them after which two of them suffered gunshot injuries. The Delhi Police have suspended two assistant sub inspectors for the clashes.
The Delhi High Court on Sunday ordered a judicial inquiry over what led totally the clash between police and lawyers at Tis Hazari court complex. The inquiry is being conducted by a retired high court judge S P Garg. He is being by director of CBI, director Intelligence Bureau and the Chief Vigilance Commissioner. (Courtesy: HT)