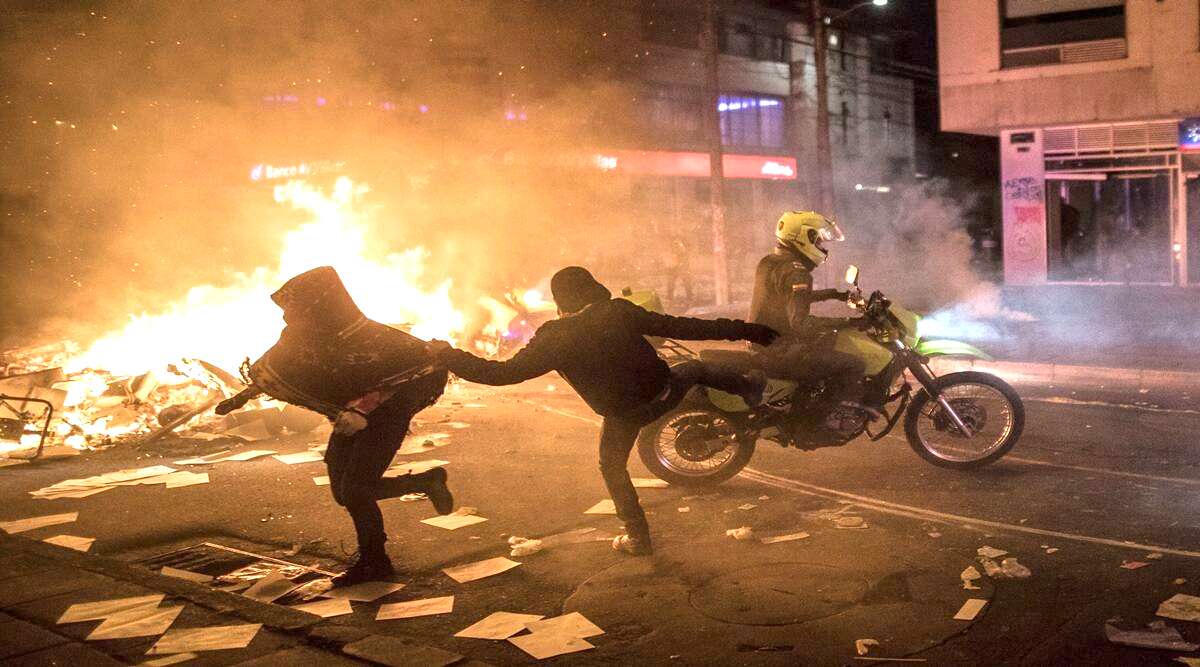 A demonstrator kicks a police officer on a motorcyle during protests sparked by the death of a man after he was detained by police at the Villa Luz neighborhood in Bogota, Wednesday, Sept. 9, 2020. (AP Photo)

BOGOTA, SEPTEMBER 12: Colombia’s Defense Minister apologized on Friday on behalf of the police for the death of a detained man that has sparked several nights of protests in Bogota and nearby Soacha, leaving 13 dead and hundreds injured.
President Ivan Duque said Friday evening that all the deaths would be investigated swiftly and no abuse by security forces would be tolerated. Demonstrators have taken to the streets for consecutive nights to protest the death on Wednesday of Javier Ordonez, 46.
A widely shared video showed the father of 2 being repeatedly shocked with a stun gun by police. He died later in a hospital.
“The national police apologize for any violation of the law or ignorance of regulations by any members of the institution,” Defense Minister Carlos Holmes Trujillo said in a video message Friday morning.
The video of Ordonez shows him pinned to the ground by police officers and subjected to successive electric shocks early on Wednesday as he begs, “please, no more.”
Police said Ordonez was found drinking alcohol in the street with friends in violation of Coronavirus distancing rules. Two police officers implicated in Ordonez’s death have been fired and face charges of abusing authority and homicide. A further 5 officers connected to his death have been suspended.
Smaller groups of protesters gathered and marched in Bogota, the capital, on Friday. “It’s no secret the police violate the power they have,” said psychology student Susana Marin, 24. “I feel unsafe, I don’t feel protected, I don’t feel proud of my national police.”
Some protesters later threw rocks at a police station in central Bogota. The police responded with tear gas, sending demonstrators scattering.
Seven young people, including teenagers, died after being shot in Bogota during protests on Wednesday, according to the Mayor’s office. Another 3 were killed in Soacha. Another 3 people died in connection with the protests on Thursday night, including a woman who was hit by a stolen public bus, officials said.
Duque said he had spoken to some of the families of those killed. “We will work quickly so the events in which their loved ones died can have not only clarification but model sentences,” Duque said during his nightly television broadcast, urging Colombians to reject vandalism and any form of violence. He also visited injured police officers and met with Bogota Mayor Claudia Lopez, who said she had handed 119 accusations of police abuse over to Duque.
Some police officers have used their firearms indiscriminately against civilians during the protests and should be fired, Lopez said in a live broadcast on Facebook Friday evening.
Family members of some of the Bogota victims from Wednesday told local media their loved ones had not been participating in the protests.
Hundreds of civilians have been injured during clashes between protesters and the police, including 72 wounded by gunshots in Bogota.
Just under 200 police officers have also been injured. At least 60 police stations have been vandalized, as well as dozens of public transport vehicles. Some 140 people have been arrested for vandalism, Duque said.
Ordonez’s death has fueled renewed outrage against the police, who were widely criticized last year after a teenage protester was fatally injured by a riot squad projectile. (Agencies)