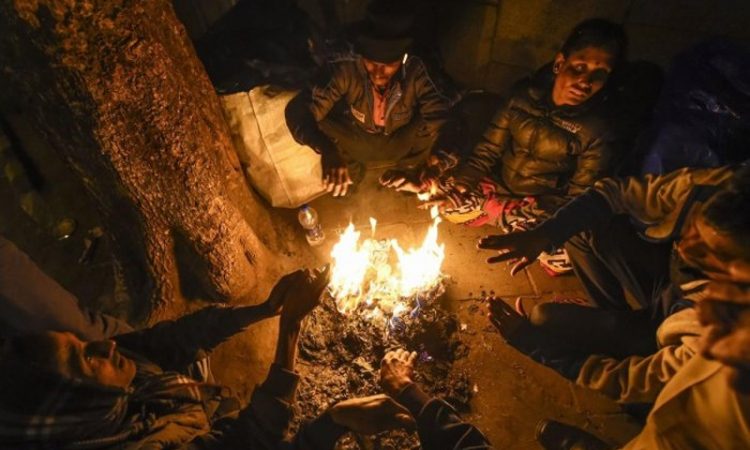 New Delhi, December 28: The frigid air barrelling through parts of north India plummeted temperatures to the season’s lowest in several places Saturday, including Delhi where the mercury hit a low of 2.4 degrees Celsius, as dense fog reduced visibility and delayed air, rail and road traffic.
The cold wave was not expected to relent until the New Year.
As dense fog enveloped the national capital, authorities were forced to divert four flights from Delhi airport to other destinations. An airport official said pilots were operating under CAT-IIIB conditions, meaning the runway visuality range (RVR) was between 50-175 metres.
A railway official said 24 trains were delayed by 2-5 hours due to poor visibility, including the Howrah-New Delhi Poorva Express.
The Safdarjung Observatory, whose reading is considered the official marking for Delhi, recorded the minimum at 2.4 degrees Celsius Saturday morning. The same temperature was recorded on December 30, 2013. Before that the coldest day in Delhi in this month was December 11, 1996, when the minimum was 2.3 degrees Celsius.
The National Capital Region is on its way to record its second-coldest December since 1901, according to the weather department.
In the hill-state of Himachal Pradesh, Kufri, Manali, Solan, Bhuntar, Sundernagar, Seobagh and Kalpa shivered at below sub-zero temperatures.
The state’s lowest temperature for the day was recorded in Keylong at minus 11.5 degrees Celsius. Snowfall is likely in middle and higher hills between December 31 and January 2.
Several parts of Jammu and Kashmir and Ladakh also reeled under the cold wave as water supply lines and parts of the famous Dal Lake froze in Srinagar. The city recorded the coldest night of the season at minus 5.8 degrees Celsius; it was minus 5.6 degrees Celsius the previous night.
The Met department has forecast rain and snowfall in Kashmir on New Year’s Eve, that is likely to give respite to people from the cold wave.
The mercury in Leh and Drass in Ladakh plummeted to minus 19.1 degrees Celsius and minus 28.6 degrees Celsius respectively, a Metrological Department official said in Srinagar.
In Uttar Pradesh, Meerut at 1.7 degrees Celsius was the coldest place in the state. Dense to very dense fog is likely to hit traffic for at least the next two days in parts of the state.
Fatehpur in Sikar district recorded the lowest temperature in Rajasthan at minus 4 degrees Celsius. Sikar and Mount Abu recorded a minimum of minus 1 and minus 1.5 degrees Celsius.
A weather department official said in Jaipur the cold wave is likely to continue for another 24 hours. The department forecast ground-frost conditions in several districts, besides dense fog.
Cold conditions persisted in most parts of Odisha too, with Sonepur town recording the season’s lowest temperature in the state at four degrees Celsius.
The IMD has forecast that similar conditions will prevail across the state for next 2-3 days.
“Minimum temperatures across Odisha have witnessed a sharp dip. They were markedly below the normal at some places in North Interior and South Interior Odisha and the coastal parts of the state,” it said in a bulletin.
There is also a possibility of light to moderate showers in some parts of interior Odisha for three days from January 2, it said, adding the temperatures may further dip after the rain.
Severe cold and fog hit normal life in most parts of Punjab and Haryana. The minimum temperature in many places were recorded 5-7 notches below the normal.
Hisar was the coldest place in the two states with the minimum settling at 0.2 degrees Celsius, seven notches below normal limits, the meteorological department said here. (PTI)