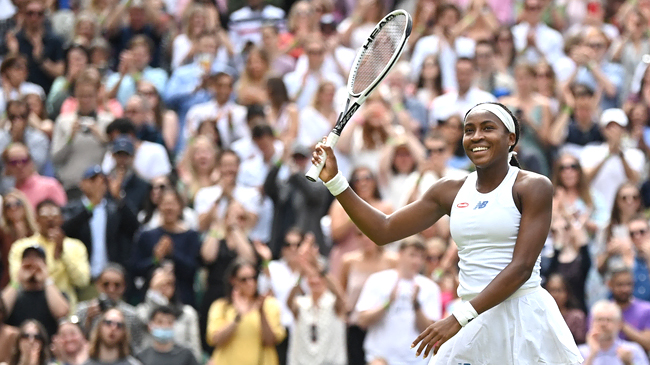 US player Coco Gauff celebrates her win against Slovenia's Kaja Juvan during their women's singles third round match on the sixth day of the 2021 Wimbledon Championships at The All England Tennis Club in Wimbledon, southwest London, on Saturday. Photo: Ben Stansall/AFP

LONDON, July 3: Seventeen-year-old American Coco Gauff matched her dream Wimbledon debut as she again reached the fourth round with a 6-3, 6-3 defeat of Kaja Juvan on Saturday.

Gauff, the 23rd seed, stormed through the opening games with a barrage of power serves on Centre Court but was asked some awkward questions by 102nd-ranked Juvan.
As she often does, Gauff had all the answers as she reached the second week and a last-16 clash with Germany’s former Wimbledon champion Angelique Kerber.
When Gauff reached the fourth round as a 15-year-old qualifier in 2019, it was something of a sensation.
Two years later, despite her age and playing in only her seventh Grand Slam tournament, Gauff’s progress is far less of a surprise and she is now a serious title contender.
Gauff raced into a 5-1 lead against Juvan in 18 minutes but briefly went off the boil as she lost the next two games.
After winning the opening set she then established a lead in the second. Although Slovenian Juvan fought tenaciously, she could not knock Gauff out of her stride.
Gauff is yet to lose a set at Wimbledon this year but will need to be at her best to get past Kerber.
Wimbledon: Kerber shines after rain delay to pass Sasnovich test
Former Wimbledon champion Angelique Kerber was put through the wringer early in her third-round clash with unseeded Aliaksandra Sasnovich on Saturday but the German rallied from a set down to win 2-6, 6-0, 6-1 after a rain delay.
Kerber faced a tough test against Sara Sorribes Tormo in the previous round before overcoming the Spaniard in the longest women’s match at Wimbledon since 2011 and made a sluggish start on Saturday by twice dropping serve in the opening set to give Sasnovich a 4-0 lead.
World number 100 Sasnovich, taking on a second former All England champion this week after watching Serena Williams limp off injured in their opener, wrapped up the first set in style after rain temporarily halted the action on Court Two.
Kerber had warmed up for Wimbledon with her first title in three years at the inaugural Bad Homburg tournament last week and the 33-year-old showed why she cannot be written off on grass with a blistering response in the second set.
The 2018 champion shot out of the blocks, playing inspired tennis to hand her 27-year-old opponent a bagel and level the contest at one set apiece.
A wayward forehand by Sasnovich gifted Kerber the advantage at 3-1 in the decider and the only remaining Wimbledon champion in the women’s singles draw further tightened her grip on the match before finishing with an ace to reach the last 16.
In the fourth round, 25th seed Kerber will face the winner of the match between American teenager Coco Gauff and unseeded Slovenian Kaja Juvan.
Britain’s world number 338 Emma Raducanu in Wimbledon wonderland
Emma Raducanu dropped to the ground of Court One in disbelief as the 18-year-old Briton, who only a couple of months ago took her school leaving exams, reached the fourth round of Wimbledon on Saturday.
The Canada-born Raducanu, ranked 338 in the world, only made her debut on the WTA Tour in June but outclassed the vastly-experienced 45th-ranked Sorana Cirstea 6-3, 7-5.
Emblematic of her coolness was how she hit back from 3-1 down in the first set to rattle off eight games in a row and take control of the match.
“I am so speechless,” said Raducanu. “At the end I did not know what my reaction would be and I just dropped to the floor.
“I was nervous beforehand as this is definitely by far the biggest court I have played on.
“It was a tight match and when I was 3-1 down I tried to hold my nerve and managed to get back into the game.”
Raducanu, who moved to England aged two with her Romanian father and Chinese mother, will next play feisty Australian Ajla Tomljanovic.
Raducanu had said on Thursday after reaching the third round she would place a spot in the fourth round of Wimbledon above top grades in her A level exams (Maths and Economics).
She had added that would be news to her parents as was the case when they saw her packing for Wimbledon.
“When I was packing for Wimbledon to come into the bubble my parents said are you not packing a bit too much match kit?” she said.
“Mind you I think I may be calling on the hotel laundry service before Monday to launder it.”
Cirstea perhaps will regret her remark prior to the match that her opponent “was a very sweet young girl” for there was nothing of that in Raducanu as she went for the jugular once she hit her stride.
However, it was a range of sublime shots from the teenager, not brute strength, that saw her pin Cirstea against the ropes.
She secured the first set with a delightful lob but more often than not it was a striking whipped forehand cross court that flummoxed Cirstea.
Raducanu’s idol and Cirstea’s compatriot Simona Halep would have been proud of the youngster’s diverse array of strokeplay.
Cirstea did rally when she came from 0-40 on her serve and on the brink of going 4-0 down to win the game and then broke back.
There was still time for the game of the engrossing match on Cirstea’s next service game which went on for almost 15 minutes and saw the 31-year-old Romanian save five break points.

Nevertheless despite the renewed fight form Cirstea it did not nudge the irrepressible Raducanu off course and she went on to a deserved victory and soaking up the adulation of the crowd. (Reuters/AFP)