Sign in
Home Top Stories CNSA can be a bridge between Naga tribes: Kikheto

CNSA can be a bridge between Naga tribes: Kikheto 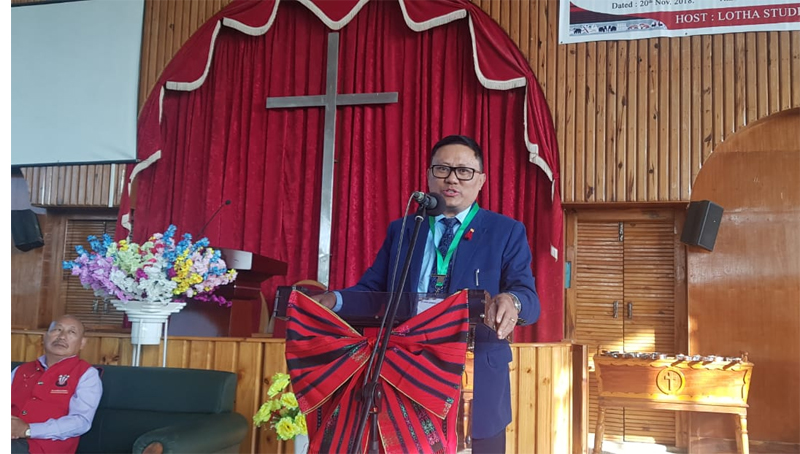 Kohima, November 21: The nascent Central Nagaland Students’ Association (CNSA) can be a bridge between the other Naga communities, said Secretary, Finance and Land Resources, Kikheto Sema, while addressing the 3rd general conference cum cultural exchange programme of CNSA at Wokha village on Tuesday.
He said the objective of forming the CNSA was not to further divide the Naga society but to be a bridge and a peace broker among the Naga communities. He said today Naga society is battered with divisions and disunity, and urged the members of the CNSA to be a bridge and an agent of peace and unity, through which Nagaland can progress and become a self-reliant State.
Not only an IAS officer but a motivator, Kikheto was a resource person on the theme, “Towards a self-reliant society”. CNSA consists of three student organisations – Ao, Sumi and Lotha. Several hundreds of students attended the two days conference hosted by the Lotha Students’ Union at Wokha village on November 19-20.
Kikheto said CNSA being in the heart of the State can be a go between Naga communities so that divisions and disunity could be done away and mutually work for progress of the State, which is abundantly blessed with natural resources. He cautioned that division would further get in the way of the State. “Let us remain united so that we can progress and be self-reliant,” he insisted. He said wealth of the State can be explored and harvested with the collective effort, adding that the State is blessed with rich natural resources but due to division among the Naga communities, people are unable to tap such resources for self-reliant.
He asked CNSA to show the way of unity so that others can follow them, stating that all talk of peace and unity but the same people have hammered Naga society into pieces. “CNSA should play the role of peacemaker and work for the unity of our Naga people. We can’t afford to further divide the Naga people,” he said.
Kikheto also partially blamed the Central Government for not giving adequate attention to the northeast which is endowed loaded with resources and could become the most progressive region in the country. He asked the people of the region to come together and work collectively to harness the resources.
“If we want to change our society we have to blame ourselves. Change is possible through young people,” he asserted.
Kikheto said Nagaland State was created out of a political exigency and shedding enough blood, but regretted that many have not realised the truth and often Article 371 (A) of the Constitution of India is being misused to suit their motives, which has hampered developmental activities on many fronts. He said statehood was born with the collective effort of all sections of people, including landless people. But Article 371(A) has been misinterpreted by the landowners, which has become main obstacle for progress of the State.
“Statehood was not brought by landowners alone; there were thousands of landless people who had sacrificed their lives for the cause of our people. Statehood was through the collective effort”, he said.
Kikheto asked the people to change the mentality of dependency and become self-reliant, adding there is no mention of Naga people to be a dependent society and remain divided in Article 371(A). He asked people not to misuse the Article if Nagaland wants to progress.
The two day conference was also attended by senior leaders from Lotha, Ao and Sumi apex organisations. (Page News Service)