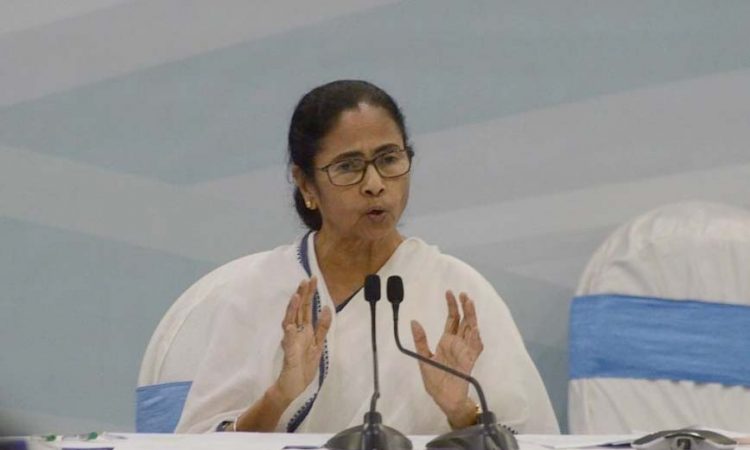 KOLKATA, MAY 20: West Bengal Chief Minister Mamata Banerjee on Thursday described Prime Minister Narendra Modi’s meeting with Chef Ministers as “casual and superflop” as, she said, none of the Chief Ministers, including herself, were given a chance to speak.
Banerjee, after attending the meeting with the PM on the COVID-19 situation, said all Chief Ministers were made to sit like “puppets” and claimed a “dictatorship” is prevailing in the country.

“The Prime Minister called a meeting and invited the Chief Ministers. And all the Chief Ministers were sitting like puppets. Nobody was allowed to speak. Then how do we speak about the public demands? We are not bonded labourers. We feel insulted and humiliated. A dictatorship is going on. The Prime Minister is feeling so insecure that he did not even listen to the Chief Ministers. What is this fear about?” Banerjee asked.
The Chief Minister slammed the PM for taking the COVID-19 situation in the country “lightly” and “evading” queries from various States on vaccines, oxygen and COVID-19 medicines.
“Today the federal structure is being bulldozed. The Centre has time to build massive buildings and statues but has no time to listen to Chief Ministers. The country is at a critical juncture but the PM is so casual (in his approach). It was a casual and super flop meeting. Delhi’s Shahhenshah is saying sab theek hai (all is well) when everyday people are dying”, said Banerjee.
The Chief Minister further lambasted the Uttar Pradesh Government for dumping suspected dead COVID-19 patients in River Ganges and wondered why Central teams or the CBI are not sent there to take note of the incident.
“The Centre has turned Namami Gange into Mrityupuri Gange. COVID-19 infected bodies are being dumped in the Ganga in UP and those are flowing into Bengal. It is polluting the water and causing damage to the environment. This is also increasing the COVID-19 infection. So many dead bodies are being dumped in Ganga and there is no record. You cannot compromise with nature. Why not Central teams or CBI teams are sent there to take stock of the situation? The CBI does not reach their doorstep”, said Banerjee.
Responding to a question on the 2014 Lok Sabha polls, Banerjee said there is a need to form a team against the BJP. “I don’t know what others will do but there is a need to form a team against the BJP Government at the Centre. It will be a fight between democracy against dictatorship,” she added.

Earlier this month, Jharkhand Chief Minister Hemant Soren had claimed PM Modi did not listen to him during the conversation over the phone on COVID situation in the state and that it was just a “monologue” from him.
The Prime Minister had then reportedly spoken to the Chief Ministers of Telangana, Andhra Pradesh and Odisha about the COVID-related situation in their states. (Courtesy: IE)

India desires normal relations with all neighbours including Pakistan: MEA

PM asks people to be vocal for local toys, calls for improving India’s standing in ‘Toyconomy’

Restoration of Jammu and Kashmir’s statehood must to rebuild trust: Farooq Abdullah