CM urges Sumis to be warriors of unity, peace 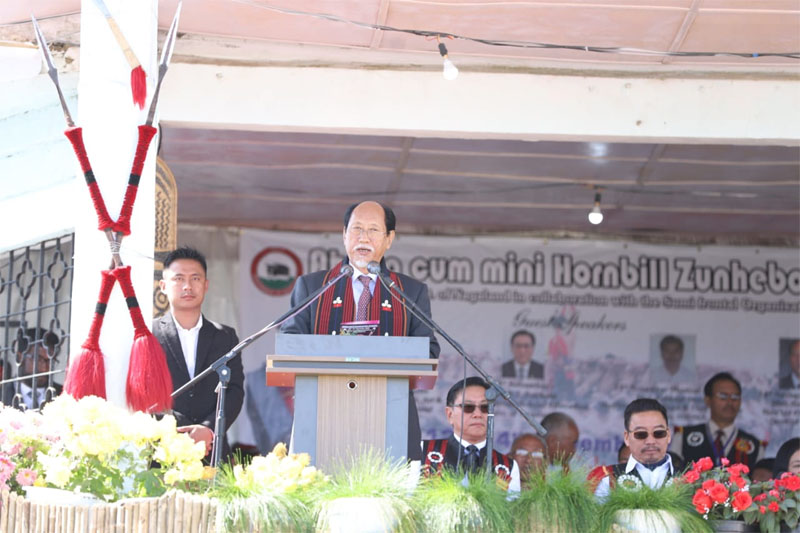 Zunheboto, November 14: Chief Minister Neiphiu Rio today called upon the Sumis to be warriors of unity, peace, reconciliation and all-round development and play a leading role in bringing permanent peace.
Addressing the Ahuna cum Mini Hornbill Festival at Zunheboto today, the Chief Minister stated that Sumi warriors were known for their bravery in the olden days and recalled that in his earlier tenure as Chief Minister, he had named Zunheboto as the Land of Warriors. With the advent of civilization and Christianity, the people should become modern day warriors and champions by leading the people in noble and just causes. He called upon the people to work collectively for the betterment of Naga society.
“You are special, you are hardworking. The story of the Sema Naga Labour Corps 1917-18 is known to all Nagas. Out of about 2000 Labour Corps, about half of that were Sumis. This means you are warriors, adventurous and hard working,” he said and appreciated the contributions of the Sumis to the Naga society.
Expounding on the meaning of Ahuna as the post-harvest festival, the Chief Minister said that harvest is enjoyed by hard work and sweat which in turn signifies work culture. “Everyone has to work and eat. Without harvesting, if we borrow from others, we will not be blessed. Therefore, work culture is hard work through toil and sweat and such festivals are a reason to celebrate the fruits of your hard work,” Rio stated.
Stating that throughout history, Nagas were known to be independent with their own system of democracy in the form of village republics, the Chief Minister said that even though the British colonials came to Naga country, they did not disturb Naga culture, tradition and way of life. He said that over time, the Nagas understood that their culture, tradition and identity was different and so the Naga national movement started.
The Chief Minister recalled that the Government of India had recognized Naga history as unique and that the Naga issue is a political issue which needs political settlement. He therefore called upon the people ensure that our rich cultural heritage, tradition, songs, dances, attires, motifs, arts and crafts and cuisine are not only preserved but promoted so that the younger generations do not lose touch with our history. Keeping these in mind, he said that Government decided to have mini Hornbills in the districts coinciding with the respective tribal festivals so that true meaning can be brought to the phrase ‘Nagaland – Land of Festivals’. He opined that such festivals are a good platform to showcase our traditions which will also promote tourism and boost the local economy.
The Chief Minister expressed delight to read in the newspapers recently that about 200 species of butterflies had been recorded from Zunheboto area. He encouraged the people to work together to preserve the fauna and promote butterfly tourism so that Zunheboto can be a destination for lepidopterists, butterfly lovers and tourists.
Calling for preservation of the environment to check climate change, the Chief Minister stated that the Government of Nagaland decided to ban the use of Single Use Plastics. “We have to be plastic-free. We have to come out with alternatives such as bamboo and cane baskets, carry bags and containers” Rio said an called upon the Deputy Commissioner and the elected Members of the District to work together to identify villages and persons who are expert in bamboo and cane crafts/weaving so that alternatives to plastics can be promoted and used. He also called upon the youths to venture into this sector by availing government assistance and bank loans.
Rio further assured that the Government will work for the people and assured to construct a multi-purpose hall in Zunheboto town as appealed by the Sumi Hoho through a representation which was submitted to the Chief Minister at Zunheboto today. He called upon the people to donate land in the greater interest of development.
Earlier, Minister for Agriculture and Cooperation, G. Kaito Aye also welcomed the Chief Minister and his colleagues and expressed gratitude for the concern shown towards the people of Zunheboto.
Others who spoke at the function included Toniho Yeptho, President Nagaland Tribes Council, Zheshito Swu, President Western Sumi Hoho while the vote of thanks was delivered by Shanawaz C, IAS, Deputy Commissioner Zunheboto. The significance of Ahuna was explained by Ghovito Jimo, President, Sumi Kukami Hoho.
The event which was attended by Advisors Pukhayi, KT Sukhalu, Khehovi and Mmhonlumo Kikon, Government officials and large number of public was marked by various dances and special numbers, traditional songs and dances, prize distribution, exhibition of various stalls and culminated with a grand Ahuna feast.
(Page News Service)