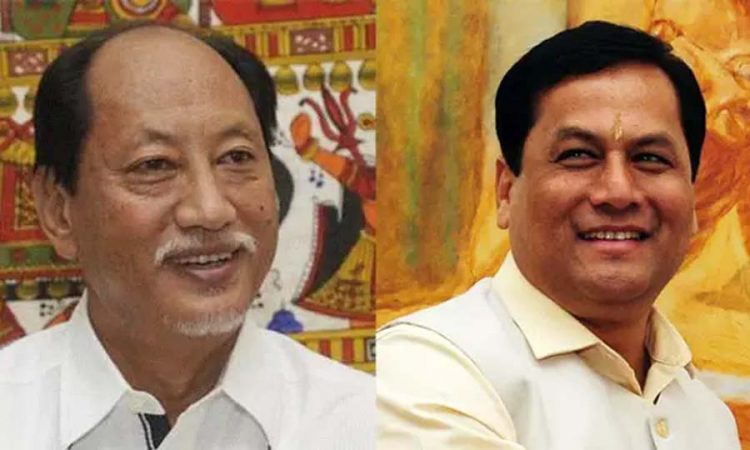 Guwahati, May 23: Assam Chief Minister Sarbananda Sonowal Saturday urged Nagaland CM Neiphiu Rio to reopen the inter-state border that was shut by the neighbouring state recently.
In a telephonic conversation between the two leaders, Sonowal said there is a need to jointly fight the COVID-19 pandemic and pointed out that economic activities must continue unhindered.
The Nagaland government sealed the border adjoining Sivasagar and Charaideo districts in Assam, following the detection of a COVID-19 case in Sonari.
Sonowal said that due to the sealing of the inter- state border, the livelihood of workers engaged in the tea gardens in the border areas have been adversely affected, according to an official statement.
The sealing of the borders has also negatively affected the labour force working in the stone quarries and the movement of construction materials, he added.
Sonowal urged Rio to take expeditious measures to reopen the border so that economic activities can be carried out without any disruption.
The Nagaland chief minister assured him to look into the request and take necessary steps to reopen the border, the statement said.
It may be mentioned here that Nagaland’s Mon district which shares its borders with Assam had recently sealed its borders with the state. Deputy Commissioner Thavaseelan K in an order issued on Thursday declared that the “inter-state movement of people and vehicles is strictly prohibited and strict penal action shall be initiated against those violators under relevant provisions of the law.”
The order was issued amid rising apprehensions over a sharp spike in Covid-19 cases in Assam, with the tally doubling in a mere 5 days after the return of several thousand stranded citizens. In a similar development, the district administration of Longding in Arunachal Pradesh has also restricted the movement of migrant labourers from Assam keeping in mind view the surge of Covid-19 cases. Longding too has proximity to Assam through Sonari. Deputy Commissioner Chesta Yadav in an order issued on Friday prohibited unauthorized entry of labourers, construction workers, businessmen, and salesmen into the district after reports of two Covid-19 positive cases in Sonari town on Thursday. (PTI/Agencies)