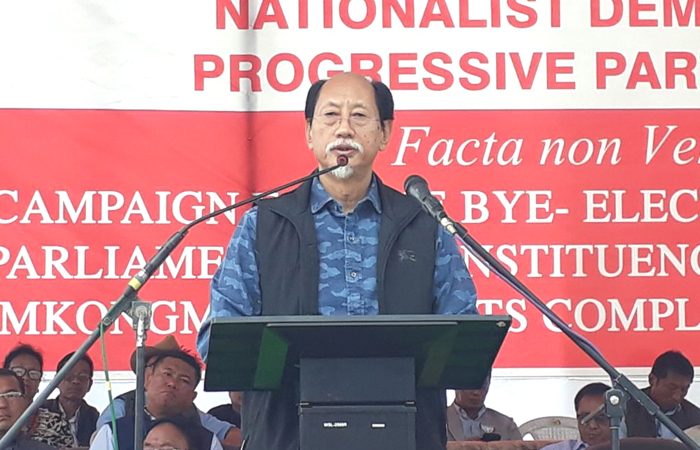 Dimapur, July 1: In a shocking admission that is likely to be latched on to by the opposition Naga People’s Front (NPF), the ruling Nationalist Democratic Progressive Party (NDPP) on Sunday said Chief Minister Neiphiu Rio’s statement on integration in New Delhi on June 12 last was not his personal views but was the Centre’s view which he relayed to electronic media.
“This (integration of Naga inhabited areas not possible) was relayed to the Chief Minister and his delegation by the GoI and therefore, they are not his personal views and neither the Party’s views or the PDA Government’s views. In fact the statements was misinterpreted and sensationalized by sections of the media,” claimed the NDPP media and communications committee in a press release.
The NDPP statement comes against the backdrop of the NSCN (IM) issuing a stern indictment of the CM’s statement in New Delhi on June 12 last that “integration of Naga inhabited areas would not be possible.”
According to the NDPP, in all his three previous tenures as Chief Minister, Neiphiu Rio has been the strongest advocate for resolution of the Indo-Naga peace process for a true solution that is honorable and acceptable to the Nagas “and in doing so, he has been the topmost champion of Naga integration from the beginning of his political career till date.”
But what many Nagas are apparently questioning, including the NSCN (IM), is if Rio is the “topmost champion of Naga integration from the beginning of his political career till date” as claimed by his party, NDPP, why did he not oppose the Centre’s view on integration or if he had indeed opposed it why did he not mention it in his June 12 interview to the electronic media in the nation’s capital.
According to a NE Live report of the CM’s interview (published in June 13 issue of Nagaland Page), Rio admitted that bringing all Naga inhabited areas under a single administrative platform would not be possible. In the interview, Rio stated that integration of Naga inhabited areas would involve other states and hence even though the demand is genuine, it is not possible to physically integrate the Naga inhabited areas.
“In the recent case of his interview to sections of the electronic media in New Delhi on 13th June, 2018 after meeting with the Union Home Minister and officials of the GoI, the Chief Minister only stated what was conveyed to him and the State Government,” said the NDPP. Here the NDPP also appears to have got the dates mixed up as the report of the CM’s interview was datelined June 12, and published on the June 13 issue of print media including Nagaland Page.
“Much has been said on the issue of integration of Naga contiguous areas by our political adversaries targeting the Hon’ble Chief Minister. The NDPP does not want to get into a paper war but since personal attacks have been made, it is pertinent that the truth and the facts are brought out to the public so that the lies and propaganda of the NPF can be highlighted in the public domain,” the NDPP release said.
Accusing the NPF of trying to question the CM’s stand on the issue of Naga integration saying “actions speak louder than words,” the NDPP claimed that there is “no validity or merit” in the opposition’s attempts to question the Chief Minister’s stand or integrity on the issue of Naga integration.
“Therefore, it can be accurately concluded that the statements of the Opposition do not contain any truth but are instead aimed at personally attacking the Chief Minister. This is an honest reflection of a frustrated Opposition whose house continues to break down after being rejected by the people election after election,” it said.
But with the NSCN (IM) now questioning the integrity of the CM on the integration issue, it remains to be seen if the NDPP’s justification blaming the opposition NPF would stand. (Page News Service)