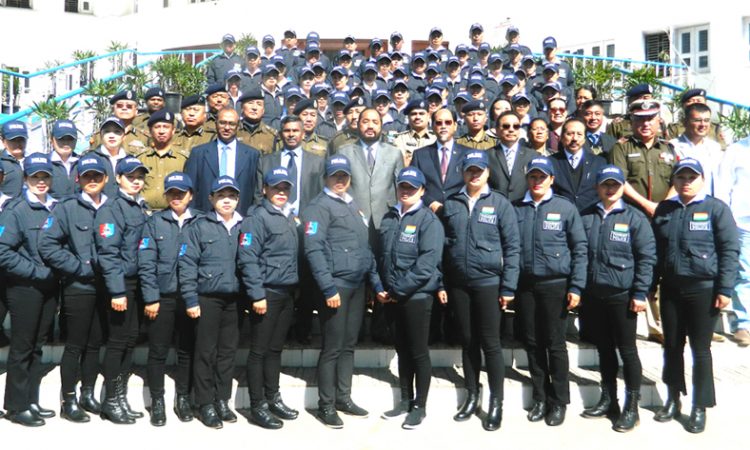 Chief Minister Neiphiu Rio and others with tourist police personnel during the launching of Nagaland tourist police at PHQ Kohima on November 26, 2018.

Kohima, November 26: Chief Minister Neiphiu Rio today launched Nagaland Tourist Police which is second in North East after Arunachal Pradesh.
He also flagged off the Tourist Police vehicles and inaugurated the Integrated Control Room for Tourist.
A booklet comprising of important contact numbers along with important tourist spots, details of all homestays/hotels was also released on the occasion.
Nagaland became the 2nd state in the Northeastern states to launch tourist police for maintaining the safety and security of the tourists during Hornbill Festival, starting from December 1.
The tourist police will be deployed at Railway Station Dimapur/Airport, Chumukedima Check Gate and 12 sectors in Kohima.
There will also be reception counter at Airport and Railway Station in Dimapur. There will be integrated control room including grievance redressal mechanism.
24 hour Control Room has been activated and shall be manned by 12 dedicated police personnel and tourism officer.
The primary role of the tourist police will be to provide facilitation, guidance, safety and security to foreign and domestic tourists.
The Tourist Police will work for the safety and security of the tourist and report any crime against them to the nearest police station.
In his address, Chief Minister Rio lauded the efforts of the Police and Tourism Department in providing safety and security to the visitors from within and outside the country. Expressing that Nagas had a very bad image for long time and was known as head hunters, beside the tag of insurgent hit state with Disturbed Area Act in force.
He said that because of the unresolved political issue, the AFSPA is in force which creates fear psychosis among the first time visitors.
Nonetheless, he said that with the Naga nationalist groups enters into ceasefire with government of India and the peace parleys in progress semblance of peace has come to the state.
Rio recalled that the GoI had initially imposed Prohibited Area Permit but now it has been relaxed to Protected Area Permit, which he said shows that Nagaland has been overcoming the negative image.
In this, he reiterated that the Naga legislators have resolved to facilitate an early solution to the vexed issue and also pave way for any alternate arrangement.
Stating that with the help of all including police, security forces, civil societies, churches and government machineries law and order issue situation in the state has become better because of which the GoI has recognized and awarded Nagaland with the Best Law and Order situation among the small category states.
Also harping on the Mini Hornbill Festival organized by the respective tribal bodies, the Chief Minister said the innovative idea of tourist police should reach to every district.
He expressed hope that with the commencement of the festive season, Tourist Police would be the real ambassadors for the State in dealing with the tourist with humbleness and the social etiquettes.
He also went on to state that tourist want safety and security to enjoy their holidays anywhere they go and if they get it they will go back and be the ambassadors of the state in spreading about the unique, vibrant and rich tradition and culture of Naga people.
Further, Rio also called upon the celebrants to be environmentally conscious on the use of plastics and to have a plastic free celebration.
Deputy Chief Minister, Y Patton said Nagaland State has many inherent advantages of being a tourist destination. In order to make optimum utilization of these inherent advantages to generate more economic activity, one area is being the policing and security of tourist, he said adding that creation of specialized Tourist Police force will not only help in protection of Tourist but shall also enhance the appeal of Nagaland as a favoured Tourist destination.
Safety and security are vital in providing quality service in tourism, he said adding that more than any other activities, the success or failure of a tourist destination depends on being able to provide a safe and secure environment to the visitors.
For a progressive destination development in the parlance of tourism, the destination has to have an image of utmost safety and tourist friendliness, Patton added.
Advisor for Tourism and Art & Culture, Khehovi Yepthomi said security of tourist is essential for every destination while trying to increase its popularity among visitors.
Today is a remarkable day not only for the department of tourism but Nagaland state as a whole, he said adding that introduction and launching of Tourist Police in Nagaland will be a ‘Game Changer’.
DGP Nagaland T John Longkumer, Additional Director (HoD) Tourism Department, Akhale Vizol and IGP (Range) Sonia Singh also delivered short speeches.
Chaired by ADGP R P Kikon the programme commenced with prayer by Pastor Vesotsu Rhakho, Police Baptist Church. (Page News Service)