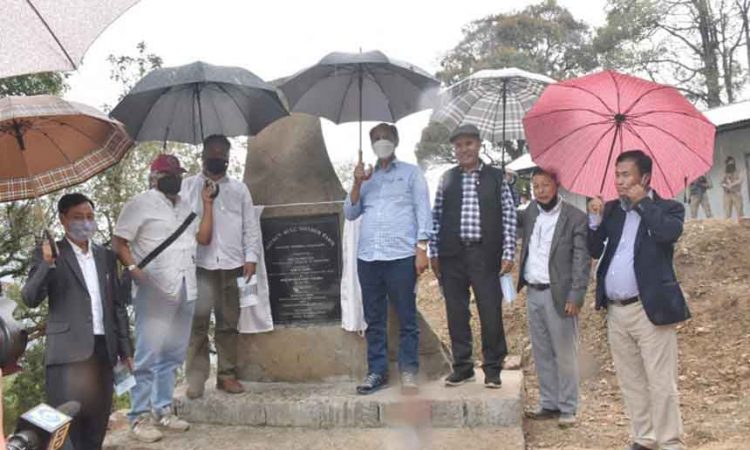 Dimapur, May 1: Nagaland Chief Minister Neiphiu Rio on Saturday stressed on the importance of Mithun (Bos frontalis) in the context of Naga tradition and pushed for preserving the practice of indigenous Mithun rearing.

“Mithun is a symbol, an identity and a unique tradition of the State and is a prestige for the Nagas,” he said while inaugurating a Mithun Bull Mother Farm of the Nagaland Livestock Development Board under the Department of Veterinary & Animal Husbandry at Puliebadze today.
Stating that Mithun (Bison) rearing needs a wide area of forest, he said the site at Jotsoma community reserved forest, being one of the biggest and best forest under Kohima district, the project model under centrally sponsored scheme (Rashtriya Gokul Mission) was proposed and selected after properly studying its topography, climate, vegetation and most importantly the natural habitat and the experiences in Mithun farming practices.
All Mithuns belonging to individual farmers were procured by the NLDB and handed over to Jotsoma Village Council for the project, Rio said and applauded the village council for accepting the Government proposal to set up the project at Jotsoma building a trust between the village and the Government.
Rio also urged the Veterinary Department and the village council to ensure that the project be a model for sustainable forest conservation by generating maximum income without detrimental effect to the forest ecology.
Managing Director NLDB, Dr Neikeyielie Theunuo stated that Mithun Bull Mother Farm at Jotsoma had been formulated to be a model to sustain the ecological balance of the reserve forest so that agricultural activities and deforestation can be controlled. He mentioned that Mithuns play an important role in protection of forests and villages from wild fire apart from revenue generation.
In the project, communitization has been implemented for the first time to generate revenue for the whole community with equal dividend of the revenue to its members, so that the community land usage does not go bias and with equal share of income. By implementing breeding guidelines, the desired genotype and phenotypic characters can be obtained for further propagation and development while the forest flora and fauna can be maintained well without any detrimental effect as was observed and cross studied intensively.