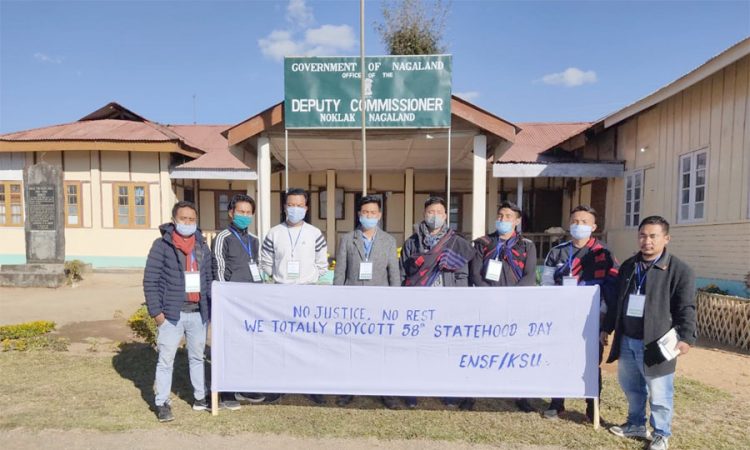 DIMAPUR, DECEMBER 1: A meeting convened by the Chief Minister of Nagaland with the Eastern Naga Students’ Federation (ENSF) on Tuesday to break the deadlock over the indefinite agitation called by the students’ body remained inconclusive.

ENSF president Sepili L Sangtam said the democratic indefinite agitation will continue in Eastern Nagaland jurisdiction till their demands are fulfilled.
In a press release, ENSF said the meeting could not come to a logical conclusion as the Chief Minister stated that to address all the charter of demands put forth by the Federation requires some more time and also need approval of the Cabinet.
Meanwhile, the 2nd phase of democratic indefinite agitation passed off peacefully in all Eastern Nagaland districts. The boycotting of Statehood Day celebration, locking down of Government offices and restriction on movement of Government registered vehicles by the 6 federating units at respective headquarters passed of peacefully, said Sangtam.
On Tuesday, one vehicle was seized for not respecting the directives issued by the Federation. The seized vehicles will be released only when the demands are fulfilled.
The Federation further informed all 6 federating units that the 2nd phase of indefinite democratic agitation remains the same as per the directives issued earlier.
PRSU: Complying with the directives of the Eastern Naga Students’ Federation (ENSF) and Khiamniungan Students Union (KSU), the Pathso Range Students Union (PRSU) enforced the 2nd Phase of democratic agitation within its jurisdiction on December 1. Volunteers from Pathso, Ekhao, Pathso Nokeng and Pathso Town student unions participated in the agitation. The agitation commenced at 6 a.m., at EAC Panso headquarters by displaying placards.
The National Flag was not hoisted and no activities were organized relating to the 58th Nagaland Statehood Day, it said
However, the office of the Extra Assistant Commissioner (EAC) functioned normally and there was no any untoward incident. Later in the day, EAC Panso, Changsang Soted, who is also a former ENSF President, held interaction with the agitating-students.
Tuensang: Under the directives of the Eastern Nagaland Students Federation (ENSF), the Confederation of Chang Students’ Union (CCSU) implemented the 2nd phase of indefinite democratic agitation at Tuensang.
Earlier, the 1st phase of agitation was held on November 28 at Tuensang where pamphlets were pasted at Government offices and town.
The ENSF demands the rejection of the Nagaland Staff Selection Board Regulation 2020 and implementation of 45% reservation in the NSSB.
Under the re-direction of the ENSF, the CCSU today set up tyres barricade at the heart of the town, boycotting the 58th Statehood Day Celebration at the Deputy Commissioner Office complex and restricting all relating activities.
Longleng: The Phom Students’ Conference successfully launched the 2nd phase of indefinite agitation at Longleng and Tamlu Sub-Division today boycotting the 58th Statehood day celebration. The volunteers monitored the movement of Government registered vehicles and locked up all Government offices under Longleng district. However, district administration, police, medical, fire and emergency services, district court and Central agencies were exempted from the purview of the agitation.
The PSC had seized 4 Government vehicles on first day and said it would be released only on the directives of the ENSF. It said the Conference would continue to impose the indefinite agitation until their demands are fulfilled.

KSU: The Khiamniungan Students’ Union has successfully imposed the 2nd Phase of indefinite democratic agitation by boycotting the celebration of 58th Nagaland statehood day and locking up the government offices at Noklak District HQ. Nokhu EAC, Panso EAC and Thonoknyu SDO (Civil) showing resentment against the failure of state government for not fulfilling the genuine and legitimate demand of the ENSF. The Union also monitored the movement of government registered vehicle ( NL-10 & NL-11). However, District Administration, Police, Medical and Central Agencies were exempted from the purview of locking up of offices.
The KSU officials affirm that it will stand firm on the demand placed by the ENSF until the demand is fulfill by the state Government.
(Page News Service) 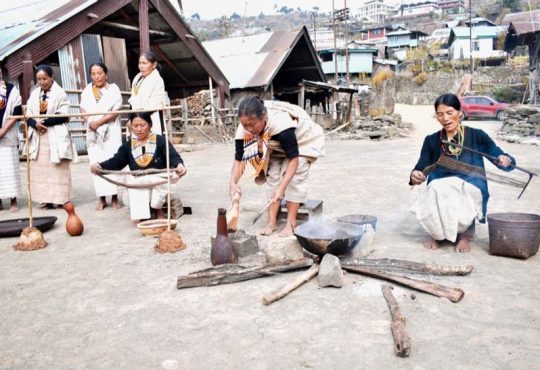