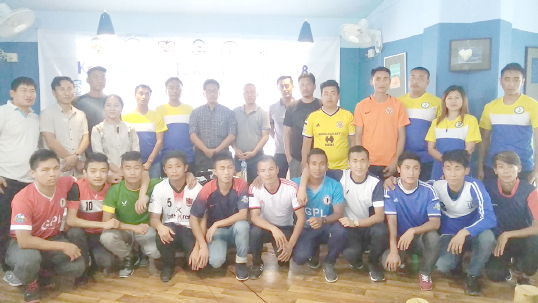 Dy. Commandant Vesupra Kezo with KTC officials and members of different teams during the launch of Clubs Jersey for Kohima Football League 2018 in Kohima on July 14, 2018.

Kohima, Jul 14: The clubs jersey for the forthcoming second edition of Kohima Football League (KFL) 2018 was formally launched today by Deputy Commandant of 4th NAP Vesupra Kezo at Where’s the Food? Restaurant in New Ministers’ Hill.
The only football league of the state capital organized by Kohima Town Club (KTC) will be commence from July 17 at Kohima Local Ground at 1:00 PM.
Launching the club jerseys, Kezo asserted that to give his best for the club and promote football.
He said we can nurture the young players and guide them to big clubs and they could represent our state through this platform (KFL).
“These days, the most popular persons are footballers. We are not lagging behind, because we have many budding talents,” he said adding “If we have discipline, hard work and team spirit, one will be able to become professional.”
KTC president Dr. Viketoulie Pienyü said that KFL-2 is an improvisation of the last league as the club is focused on higher level of professional football and higher level of competition.
He hoped of creating a fan base league and aims to increase average number of 1000 fans per match to 1500-2000 fans per match this year.
“We want to shake up the sleeping sports associations and sports institutions because we are far lacking behind the neighboring states,” he said.
Expressing that KTC desires to change the scenario of footballers, he said the idea behind starting this league is to provide a platform to the youngsters to come up and excel in the field of football thereby introduce the concept of professional football where the youngsters can make a living and make football as a career.
Remarking that since government cannot provide employment to all the youths, he said “sports is one good option for youngsters to make a decent living out of it.”
He said neighbouring states like Manipur, Mizoram and Meghalaya are doing good and ahead of Nagaland. He said KTC wishes Nagaland find a respectable place in the country (in the field of football).
Five boys who have played in the last KFL 2017 already started playing in other states, he said while maintaining that “this is our achievement”.
Further, seven boys who have played in the last league were also part of Nagaland’s team, which won Dr. T. Ao NEC Gold Cup Under-21 Football Tournament this year.
Seven teams will vie for second edition of KFL 2018, which include Ziekezou SC, New Market FC, Twenty XI FC, Vanguard FC, Sechii Zubza FC, United 16 FC and Khriekesa FC
The teams will play a double tier league to decide the KFL, 2018 champion. It will go on till August 24.
The champion will win a cash prize of Rs. 1 lakh while runner-up will pocket Rs. 80,000.
Dr. Neikiesalie (Nicky) Kire, advisor, Rural Development, Government of Nagaland will grace the inaugural function on July 17 as special invitee.
(Page News Service)