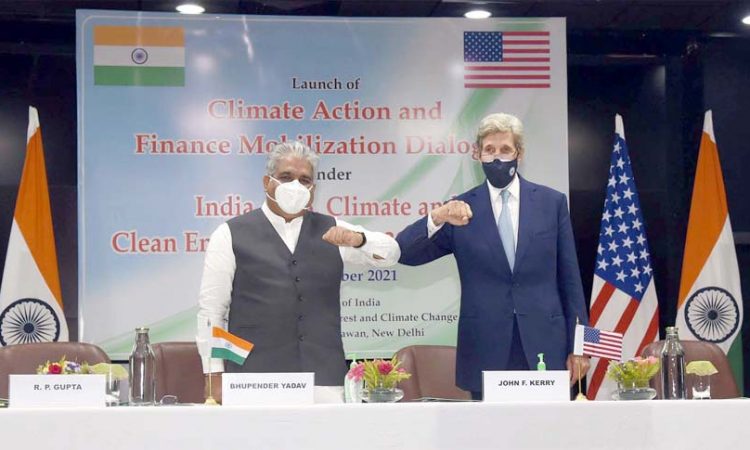 The dialogue was formally launched by Yadav and US Special Presidential Envoy for Climate (SPEC), John Kerry, at an event held in the capital.
The minister said that the dialogue will not only strengthen India-US bilateral cooperation on climate and environment but will also help to demonstrate how the world can align swift climate action with inclusive and resilient economic development, taking into account national circumstances and sustainable development priorities.
Kerry, who arrived in New Delhi on Sunday for the launch, said, “India’s leadership is essential for our clean energy future. Looking forward to advancing climate discussions this week in New Delhi.”
Addressing the gathering, Yadav said that the partnership between India and the US will help strengthen climate action both the countries have shared values.
“India and the US are natural partners with shared values and our agenda encompasses all major pillars of our strategic priorities – including defence, security, energy, technology, education and healthcare,” said the environment minister.
He said that the dialogue will provide both the countries an opportunity to renew collaborations on climate change while addressing the financing aspects.
The minister said that India is already an attractive destination for global clean energy investments and hoped that “this dialogue will work to mobilise and deliver climate finance primarily as grants and concessional finance, as envisaged under the Paris Agreement to strengthen climate action”.
Calling for an urgent action to address climate change, Kerry said to avoid more catastrophic consequences, action needs to be taken now.
“Floods, forest fires, record levels of rainfall are happening everywhere and to keep 1.5 degrees warming limit in reach, and avoid more catastrophic consequences, we must act now,” he said.
Kerry also said that it was a good time to invest in energy transition.
“There has never been a better time to invest in energy transition. Renewable energy is cheaper than ever. Investors are flocking for clean energy all around the world. The transition has already rebounded after the pandemic and is now on track to smash the pre-pandemic record of 8.4 billion US dollars invested in one year,” he said.
Terming the clean energy partnership as a major opportunity for both the countries, Kerry said it is far less expensive to deal with climate crisis now than it will be in the future.
The CAFMD is one of the two tracks of the India-US Climate and Clean Energy Agenda 2030 partnership launched at the Leaders’ Summit on Climate in April 2021, by Prime Minister Narendra Modi and US President Joe Biden.

During the event, Kerry applauded Modi for setting an ambitious target of achieving 450 GW renewable energy by 2030 and congratulated India for already achieving 100 GW.
The US Climate envoy lauded India’s leadership role in demonstrating how economic development and clean energy can go hand-in-hand and stated that an urgent Global Climate Action is the need of the hour.
He stressed that India and the US are working towards speedier deployment of clean energy.
The launch was preceded by a bilateral meet where both the sides discussed at length a wide range of climate issues relating to COP26, Climate Ambition, Climate Finance, Global Climate Initiatives, including International Solar Alliance (ISA), Agriculture Innovation Mission for Climate (AIM4C). (PTI)