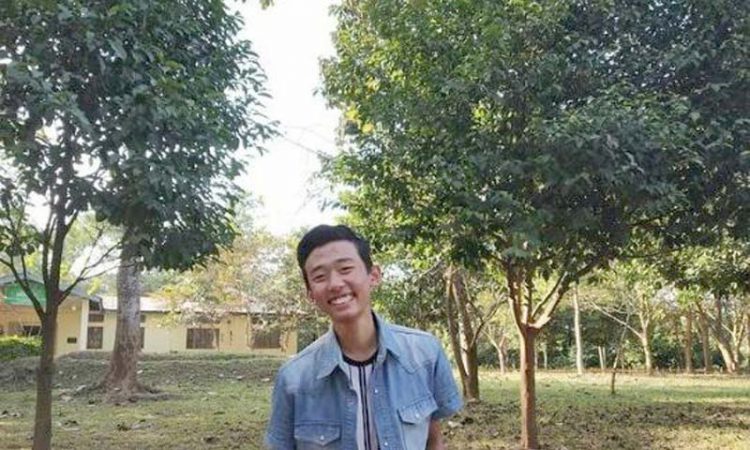 “You look like a girl” was all he heard while growing up. From losing friends to misunderstandings with his own family, criticism from people to being called a ‘prostitute’ even before he knew what it meant. He went through all this from an early age just because he was considered different by others.

Strangers called him ‘gay’, people he knew called him ‘weird’ and school mates called him ‘sissy’. While fighting against all these offensive comments, he became an easy prey for bullies because he stammers when he talk.
Imnatemjen Ozukum, hailing from Mopongchuket village, has been through some really tough situations in life but they were not enough to stop him from pursuing his passion for belly dancing.
To begin with, his relationship with his parents was distant since he stayed in hostels while studying at Dimapur. His family lived in Mon due to his father’s work. His sister, on the other side, was the one with whom he was very close, even though he was a few years older.
She was always his ‘number one supporter’ and cheered him on; and for Imnatemjen, that was enough as getting support and encouragement was very rare for him.
He spent time with his family only during vacations and they would spend time together without any misunderstandings until he began belly dancing when he was 11, and things went south from there.
When his Mother first found out about his dancing, she was shocked and had a hard time trying to process the whole situation. He and his Mother got into a heated arguments and the situation reached a level where she became vigilant about his whereabouts.
His Mother told him ‘not to dance like that’ because it was very different from other dances and she was worried about others taking videos of her son and making it viral. They always argued over the same reason ending in exchange of harsh words.
To make matters worse, his sister who was his best friend and supporter passed away when she was almost 9, and it put him under a lot of pressure. He became the only child and his family members pressured him to become the bread-earner of the family. This created more arguments with his Mother, who was still suffering from the loss of her daughter.
He always had a ‘neutral relationship’ with his Father ~ they didn’t talk much, but it was better than his relationship with his Mother. When his Father came to know about his belly dancing, he didn’t scold him but rather asked him not to dance like “hijara” (transvestite). He was hurt by such comments from his own family members.
His dancing created problems for the family. His Mother was questioned whether her son was normal or not, and comments like “you look sissy”, “you look like a girl” made him question himself as well.
There was a time when he lied to his parents to participate in a dance event; his relatives saw him dancing and asked if their son is abnormal. His parents were not happy with what they heard and asked him to be normal like other kids.
“But I was normal in my own way,” he told Nagaland Page.
To put an end to all the criticisms and arguments and to be a ‘normal child’, he decided to end his pursuit of dancing but he still received criticisms from people.
So he soon found his way back to belly dancing because dancing made him feel ‘alive and happy’. He decided to block out all negativity and started focusing on himself.
Few years later, he got through the auditions of one of the biggest state-level dance competitions, Dance Fiesta. Although he couldn’t go very far into the competition, for the first time in his life, he felt accepted as the judges and audience didn’t care about anything besides his dancing.
“I felt happy and proud of myself,” he said.
His Aunt, who took care of him when he was a little kid, told Nagaland Page that she understands him and his dancing. She said that every child is gifted with different qualities, and it is important to understand them.
She said that she explained her nephew’s dancing and passion to his parents but his parents wanted him to study well and get a proper job rather than dance as they are concerned about his future. So she advised his nephew to keep on dancing and also to concentrate on his studies.
His parents were not happy with him for not giving up dancing ~ but he kept dancing.
Eventually with the help of his Aunt’s explanation regarding his dancing, his parents are taking baby steps to understand and get used to the fact that their son is a belly dancer. They don’t ask him to be ‘normal’ any more, instead they ask him to be careful when he goes out and dance, to avoid unnecessary criticisms.
His family haven’t fully accepted the fact that he is a belly dancer, but he is happy to know that they are trying to understand and accept it.

Asked about his future plans as a belly dancer, he said: “I want to be professional belly dancer and open my own dance studio where both young and old can come and learn any genre of dance. I want to break this stereotype and let everyone know that we have the power to determine our future.”
He said that he will try his best to do well in studies as well as continue to practice his dancing skills. He said, “It won’t be easy to balance between my studying and dancing, but I am ready to challenge myself and prove myself that I can do it if I work hard.”
Imnatemjen, who came a long way from arguing with his parents and being bullied for his stuttering and dancing, said that he is planning to join dance class to improve himself and make his career as a professional dancer in the long run.
Follow and check out his videos on the given Instagram ID: imnatemjen_ozzy