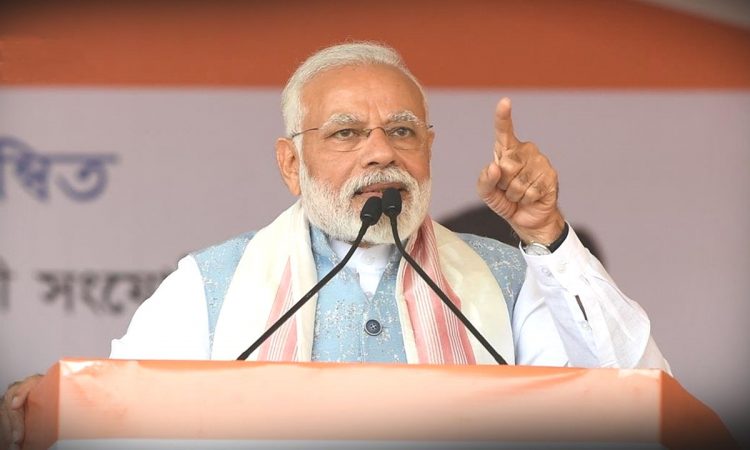 Changsari (Assam), February 9: Greeted with protests and black flags in Assam over the citizenship bill issue, Prime Minister Narendra Modi Saturday sought to allay fears about the controversial legislation claiming that it will in no way harm the interests of the people of the state and the Northeast.
Addressing a public rally in this assembly constituency of Assam Health Minister and BJP-led NEDA convener Himanta Biswa Sarma, he said the NDA government is committed to protecting the language, culture, resources, hopes and aspirations of the people of Assam and the Northeast.
This was his first visit to Assam after the citizenship bill was passed by Lok Sabha on January 8. It awaits the approval of Rajya Sabha, where the ruling coalition is short of numbers.
“It is a national commitment to the people of the Northeast that they will not be harmed in any way and citizenship will be only granted after due investigations and recommendations of the state governments,” he said.
Modi asserted one should understand that there is a difference between those who forcefully entered the country and those who were “forced to flee their homes to save their lives due to their religion. Both are not the same”.
“We are committed to providing shelter to those minorities – Hindus, Christians, Parsis, Jains and Sikhs- in Pakistan, Bangladesh and Afghanistan- who had to leave everything due to atrocities inflicted on them. They have come to our country who have faith and embraced the idea and ethos of Mother India,” he added.
The bill which seeks to provide Indian citizenship to non-Muslims from Bangaldesh, Pakistan and Afghanistan, has triggered widespread protests in Assam and other northeastern states, including those under the rule of BJP and its NEDA allies.
Modi’s visit saw nude protests, a bandh, raising of flags and burning of effigies by AASU, KMSS and other organisations agitating against the bill.
Six KMSS activists protested nude in front of Janata Bhawan, the state secretariat, and were taken into custody by the police while the Tai Ahom Yuba Parishad called a 12-hour Assam bandh to protest against the prime minister’s trip.
The impact of the bandh was felt in the upper Assam districts of Tinsukia, Dibrugarh, Sivasagar, Lakhimpur and Jorhat.
The Asom Gana Parshid (AGP), which recently snapped its ties with the BJP government in Assam over the citizenship bill, held protests after Modi’s arrival in Guwahati Friday night by taking out a torchlight procession.
Modi said that the BJP was fully committed to implement the 36-year old Assam Accord and committee on the implementation of the Clause 6 of the accord is a step in that direction.
“The BJP-led NDA government is committed to protect the language, culture, resources, hopes and aspirations of the people of Assam and the committee will take these into consideration while drafting its report,” he said.
Without naming the Congress, Modi alleged that it was “not sincere in implementing the accord”.
“The accord was signed 36 years ago but is yet to be implemented. They have done injustice to the people of Assam. Let me assure you that our government will implement the accord in letter and spirit,” he added.
Referring to the problem of infiltration, Modi said his government was committed to complete the work of updating the National Register of Citizens (NRC), which is being conducted under the supervision of the Supreme Court, within the stipulated period.
“The BJP is committed to solving the infiltration issue and will complete the sealing of the Indo-Bangla border at the earliest,” he said.
The BJP has taken the initiative to grant Scheduled Tribe (ST) status to six communities- Tai Ahom, Koch Rajbongshi, Chutiya, Moran, Muttock and tea tribes- and has brought a bill in the Parliament accordingly but the interests of existing ST communities will be protected, he said.
He praised Assam Chief Minister Sarbananda Sonowal and his team for “working very hard to free Assam of corruption which the previous government had made a part of the system”.
He added the Centre and will extend full support to the Assam government in strengthening the state’s economy.
The prime minister also said that the BJP government was committed to make Assam the oil and gas hub of the country and in the last four years, projects worth Rs 14,000 crore were completed.
“Projects worth Rs 9500 crore are moving forward and are expected to be completed soon,” he added.
The Rs 1200 crore Biorefinery project of the Numaligarh Refinery Limited will use bamboo leading to creation of biofuel, he added.
Referring to the projects he inaugurated or for which he laid foundation stones prior to the rally, Modi said when completed, these will change and strengthen the economy of Assam and the entire northeastern region. (PTI)