HomeTop StoriesCitizenship bill set to be introduced in Parliament despite opposition in NE
Top Stories
1 year agoDecember 4, 2019No tags 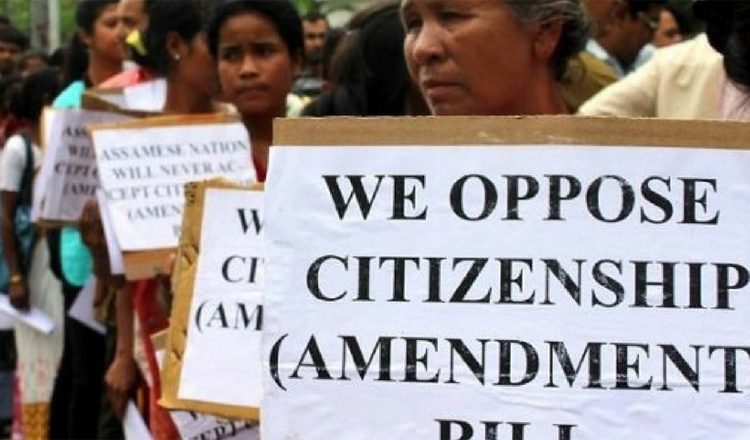 New Delhi, December 4: The contentious citizenship bill, which has created strong resentment in the Northeastern states, is set to be tabled in Parliament with the Union Cabinet on Wednesday giving its clearance to the draft law.
The Citizenship (Amendment) Bill or CAB, which aims to provide citizenship to non-Muslim refugees from Pakistan, Bangladesh and Afghanistan, has been slammed by several opposition parties as communal and divisive with Congress threatening to go to Supreme Court to challenge the proposed legislation.
At a briefing of the cabinet meeting, Union minister Prakash Javadekar said the government has taken care of the interests of everyone and “the interest of India”.
“People will welcome it as it is in the interest of the nation,” he said when asked about the protests in the Northeast.
The Cabinet approval to the bill came hours after Union Home Minister Amit Shah completed his three days of interactions with leaders of political parties, students bodies and civil society members from the Northeast to assuage their concerns.
Shah held his last meeting with these groups in the early hours of Wednesday.
Officials said the Inner Line Permit (ILP) regime areas and those regions which are governed under the Sixth Schedule of the Constitution are learnt to have been excluded from the purview of the bill.
In terms of Section 2 of the Bengal Eastern Frontier Regulations, 1873, the Inner Line Permit system is prevalent in Arunachal Pradesh, Mizoram and Nagaland. Citizens of other states require ILP for visiting these three states.
Under the Sixth Schedule of the Constitution, autonomous councils and districts were created in tribal areas in Assam, Meghalaya and Tripura. The autonomous councils and districts enjoy certain executive and legislative powers.
The Congress, Trinamool Congress, CPI-M and a few other political parties have been steadfastly opposing the bill, claiming that citizenship can’t be given on the basis of religion.
Congress’s Shashi Tharoor said it violates the basic idea of India that religion can never be a reason for citizenship.
“Those who believe that religion should determine nationhood… that was the idea of Pakistan, they created Pakistan. We have always argued that our idea of nation was what Mahatma Gandhi, Nehruji, Maulana Azad, Dr Ambedkar have said, that religion cannot determine nationhood,” he told reporters in Parliament premises.
Veteran Congress leader and three-time Assam Chief Minister Tarun Gogoi said the Congress will move the Supreme Court against the CAB which is “unconstitutional” and “divisive”.
“The Congress will move the SC because we believe that CAB is unconstitutional and against the spirit of secularism. It is divisive, and violates the constitutional provision – equality for all. There cannot be division on basis of religion, caste or creed,” he said in a tweet.
The All India United Democratic Front, has written a letter to Shah, requesting him not to introduce the CAB in Parliament as it is “against the interest of people of Assam and the country”.
Twelve MPs from the Northeast wrote a letter to Prime Minister Narendra Modi last week saying civil society groups of the region are opposing the bill.
Despite facing serious opposition, including from ally JD-U, the BJP has expressed its determination to pass the bill.
Defence Minister Rajnath Singh on Tuesday had asked party MPs to be present in large numbers in Parliament when the bill is tabled.
This bill is as important as the move to nullify Article 370, he had said.
The draft legislation is expected to sail through Lok Sabha, where the BJP has a majority, and is unlikely to face serious hurdles in Rajya Sabha as the ruling party has often managed the support of parties like the BJD, TRS and YSR Congress for its flagship agenda.
The CAB was an election promise of the BJP in the 2014 and 2019 Lok Sabha polls.
A large section of people and organisations in the Northeast have opposed the bill, saying it will nullify the provisions of the Assam Accord of 1985, which fixed March 24, 1971, as the cut-off date for deportation of all illegal immigrants irrespective of religion.
The BJP-led NDA government had introduced the bill in its previous tenure and got the Lok Sabha’s approval. But it did not introduce it in the Rajya Sabha, apparently due to vehement protests in the Northeast.
The bill lapsed following the dissolution of the last Lok Sabha.
According to the earlier bill, those who came to India on or before December 31, 2014, will benefit from the proposed legislation.
The government is believed to have effected certain changes in the previous version of the bill in its new avatar.
The BJP’s alliance partner in Assam government, the Asom Gana Parishad (AGP) appear to be divided on the issue with its founding president and signatory to the Assam Accord Prafulla Kumar Mahanta opposing the bill while the current chief and Agriculture Minister Atul Bora has come out in support.
The ruling party’s third alliance partner and Bodoland People’s Front has also not opposed the bill as it is unlikely to be applicable to the BTAD areas which is under the Sixth Schedule of the Constitution.
The influential All Assam Students’ Union (AASU), Asom Jatiyatabadi Yuba-Chatra Parishad (AJYCP), Krishak Mukti Sangram Samiti (KMSS), premier literary organisation Asam Sahitya Sabha (ASS) have announced agitation against the bill till it is withdrawn. (PTI)