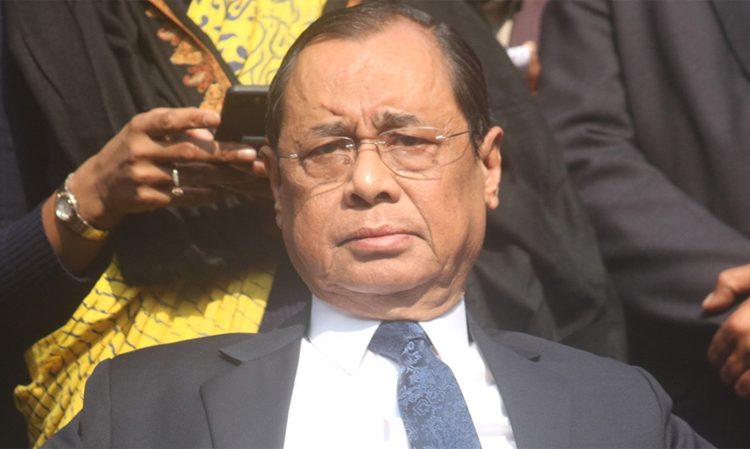 NEW DELHI, November 3: Chief Justice of India Ranjan Gogoi on Sunday strongly defended the current exercise of National Register of Citizens (NRC) in Assam, saying it would be a base document for future and was urgently needed as prior to it there was “guesswork” on the number of illegal immigrants in the state that had fuelled fear and a vicious cycle of violence.
Justice Gogoi, who is heading a top court bench which is monitoring the process of NRC in Assam, was also critical of “arm chair commentators” who, he said, are not only far away from the ground reality but also present a highly distorted picture due to which the state and its development agenda have taken a hit.
The Chief Justice, who is from Assam, said that NRC is neither a “new or a novel idea” as it found expression as early as in 1951 and the current exercise is an attempt to update the 1951 NRC.
“The NRC is not without contestations. Let me take this occasion to clarify. The NRC is not a new nor a novel idea. It founds expression as early as in the year 1951 and in particular context of Assam in year 1985 when the Assam accord was signed. In fact, the current NRC is an attempt to update the 1951 NRC,” said Justice Gogoi, who was addressing a gathering in Delhi during inauguration of book ”Post Colonial Assam (1947-2019)” authored by veteran journalist Mrinal Talukdar.
He said that prior to this exercise enormous amount of guesswork was there regarding number of illegal immigrants which “in turn fuelled panic, fear and vicious cycle of lawlessness and violence”.
He lamented that “careless” and “irresponsible reporting by a few media outlet only worsened the situation.”
“There was an urgent need to ascertain, some degree of ascertaining, on the number of illegal immigrants which the current exercise envisages. Nothing more and nothing less. The entire exercise is nothing but manifestation of one of the most peaceful means by which stake holders seeks to remedy the wrong and omissions of that turbulence whose effects changed the course of the life of not only individuals but of communities and culture across the region,” he said.
The Chief Justice praised the citizens of Assam for displaying great magnanimity and large heartedness in accepting various cut off dates for the purpose of preparation of NRC.
The updated final NRC in Assam was released on August 31, this year excluding names of over 19 lakh applicants in the state.
A total of 3,30,27,661 people had applied to be included in the NRC. Of them, 3,11,21,004 have been included in the document and 19,06,657 excluded.
The names of 1.9 crore people were published as part draft NRC on the midnight of December 31, 2017.
“It needs to be told and brought on record that people who raised objections including on these cut off dates are playing with fire. At the cross road we need to keep in mind that our national discourse has witnessed the emergence of armchair commentators who are not only far removed from ground realities but also seek to present a highly distorted picture,” said Chief Justice Ranjan Gogoi.
He said the emergence of social media and its tools have also fuelled the intent of such arm chair commentators, “who thrive through their double speak language”.
“They launch baseless and motivated tirades against democratic functioning and democratic institutions, seeking to hurt them and bring down their due process. These commentators and their vile intentions do survive well in situations where facts are far removed from the citizenry and rumour mills flourish. Assam and its development agenda has been victim of such arm chair commentators,” he said.
Justice Gogoi said that people must resist the urge of “finding wrongs and shortcomings everywhere” they look and the “constant desire to play to the gallery by demeaning the institutions and their efforts must be resolutely avoided and discouraged.”
Regarding the NRC exercise, he said, “It is an occasion to put things in proper perspective. The NRC is not a document for the moment. 19 lakhs or 40 lakhs does not matter. It is a base document for the future. It is a document to which one can refer to determine future claims. This in my comprehension is intrinsic value of the NRC.”
The Chief Justice said functioning of institutions is assessed especially by the media and particularly by social media.
Apart from the Chief Justice, Supreme Court judge Hrishikesh Roy was also present during the function along with 1975-batch IPS officer AB Mathur who was last year appointed by the Centre as an interlocutor to hold talks with United Liberation Front of Assam (ULFA) and other groups in North-East.
Justice Roy praised Talukdar for his efforts in writing the book and said several historical aspects about Assam have come to light through his work.
The top court judge also quipped that he believes that if the Chief Justice decides to write a book, it would be a “best seller”.
Speaking on the occasion, Mathur noted that he is presently holding talks with three groups in Assam and one in Manipur and talks are progressing very satisfactorily.
He said that people of Northeast want peace and there is willingness that it is time for development of the region. (PTI)