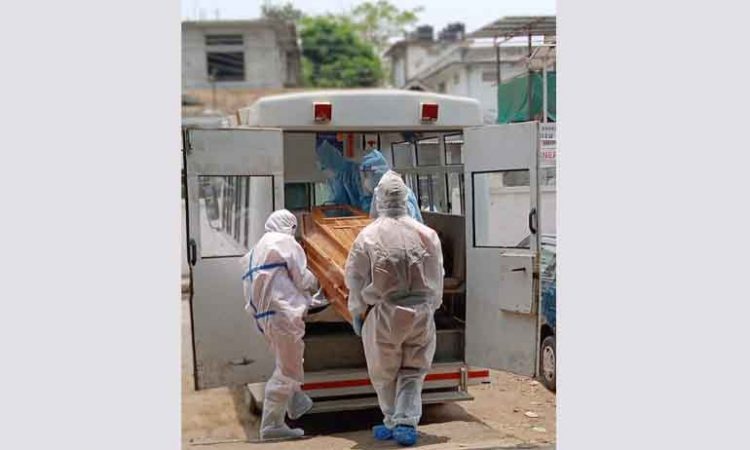 Personnel of Home Guards, Civil Defence and State Disaster Response Force in Dimapur loading a dead body onto an ambulance.

Dimapur, May 7: And the only sound that’s left
After the ambulances go
Is Cinderella sweeping up
On Desolation Row
In his song Desolation Row, the Nobel Laureate Bob Dylan uses his fabled storytelling prowess to deliver an oddly poignant vignette involving a lonesome Cinderella. While the scene is self-explanatory, the character of Cinderella is used to reinforce the idea of someone unappreciated or whose attributes go unnoticed.

The point being that Cinderella sweeping up on Desolation Row could be the story, and fate, of anybody. For instance, it could very well be applied to describe the contemporary circumstances of 30 men (plus their Commandant) stationed at their office near DC Court Junction in Dimapur.
Tasked with disposing dead bodies that have succumbed to COVID-19 in Dimapur, this team of 30 personnel from Home Guards, Civil Defence and State Disaster Response Force has been doing the metaphorical cleaning up of Desolation Row since June last year.
On Friday, the District Commandant of Home Guards, Civil Defence and State Disaster Response Force in Dimapur, Y Khenito Chishi told Nagaland Page that since April 10, they have disposed 15 dead bodies in Dimapur.
Last year, the team disposed 31 dead bodies.

As per protocol, family members either bury/cremate COVID victims following all safety measures after obtaining No Objection Certificates (NOC) from their respective colony/village authorities or surrender the bodies to the District Task Force.
“We get an NOC from the family members saying that we can dispose the body. Since May 3, we have been disposing dead bodies for 5 consecutive days. Even today we have just returned after burying one body,” Chishi said.
The “unclaimed” dead bodies are buried at the new Naga Cemetery, located at Zani village area, he informed.
“Last year, it was comparatively easy. But this second wave is really dangerous”, said Chishi. His statement is informed by the fact that within 28 days, they have already disposed 15 dead bodies this year. That is almost half of last year’s work.
“As someone who has seen things from very close quarters, I would request everyone to be very careful. That’s the only option, we should stay safe”, said the official.
One out of the 15 dead bodies for this year had to be cremated. “Even for cremation, we have to transport the body from the morgue. We carry it all the way, and place it on the pyre”, he informed.
Though the team members armour themselves with PPE suits while handling the dead bodies and the associated affairs, there are concerns. “Especially at night or during hot days, the PPE suit is extremely uncomfortable. It is like we have been bathed in sweat”, shared Chishi.
That doesn’t mean that rainy days are any easier, he added. “Since it is a new cemetery, there is no proper road. The ambulance gets stuck in the mud and we have to push it in the rain. Sometimes even at 12 a.m. or 1 a.m.”, the official said.
The team functions on a roster, 24×7. “After disposing a dead body, our boys are quarantined and then tested (for COVID). In the meantime, the next set of boys takes care of the works. That is how we rotate among ourselves,” he shared.

Regardless of the obvious challenges, Chishi is quite confident in his team’s strength and ability. “Unless there is mass death, we can handle the situation. It’s our job. It’s the job of Health authorities to inform us of the COVID bodies. Ours is to dispose them”, he said.
(Page News Service)